Round 9: Jeff Fung vs. Paul Russell 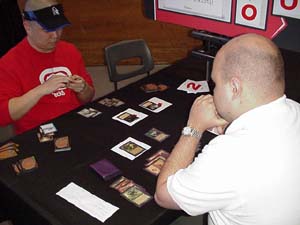 West Coast sensation Jeff Fung demanded this Feature Match. He claimed his public wouldn't let him have it any other way. Who are we to argue? His opponent is Paul Russell, who clawed his way in the hard way: Through the Open Qualifiers. Both are still within striking range of the Top 8.

Both players opened with morphs, and when Fung swung in, Russell chose to block. Fung paid three to flip up his Thrashing Mudspawn.

"Got your Cutthroat pretty good there, didn't I? " – Jeff Fung

Indeed he had. Russell's next play was Words of War. Fung bashed him for four, but had no play. Russell activated Words of War during his upkeep to shoot the Mudspawn, then cycled Spark Spray through the Words to kill it. Fung cycled Dragon Wings, looking for a play. He found a morph. Russell came back with Embermage Goblin. Fung hit for two and played Prowling Pangolin.

"That's going to be a problem." – Paul Russell

He made a Goblin Grappler and passed it back. It was the best six life he'd ever gained. Fung made a Mistform Wall and gave it back. Russell sat on his current board position. Fung hit again. Embermage Goblin blocked and shot the Pangolin. Russell tried to finish it with Solar Blast, but Willbender had something to say about that, sending the burn back at Russell's nugget.

It was at this point that Fung leaned in conspiratorially.

"Have you seen this grip?" 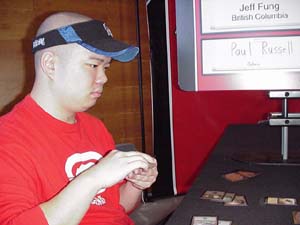 Fung had to send his opening hand back: The full land flush. He had to go to five, since there were no lands in his six. Russell started with Goblin Sledder, but then forgot to swing with it on turn two. He corrected his error on the third turn, and dropped a morph. Fung answered with Embalmed Brawler, amplified once by Nantuko Husk. Russell was stuck on three lands and waited. Fung was likewise stuck, but played out the Husk.

Russell finally got his fourth land, and promptly dropped Lay Waste on Fung's only swamp. Fung ripped another like it was nothing. He swung in with Husk and Brawler with three mana open. Russell traded Sledder for Husk, then after combat Fung played a morph. It seemed like a bad deal for Fung.

Still Russell had no play. Fung made a Carrion Feeder and swung with his morph and Brawler, trading his Seaswift for what turned out to be Russell's Titanic Bulvox. Russell untapped and played Feral Throwback, showing Needleshot Gourna. Fung was compelled to hold back. Russell swung in and tried to provoke the Brawler. Fung ate it and blocked with his chin instead. Russell added the Gourna to the table.

Fung still wasn't done. He had Frozen Solid for the Throwback. Russell seemed to be out of gas, playing only a Wellwisher and hitting for three. Fung hit back for five and played Mistform Wall. Russell tried swinging again, but Fung was all too happy to block with his Wall. Russell shrugged his shoulders and played his Frenetic Raptor. Fung hit again, swinging with morph and Feeder then flipping up the Mudspawn to leave Russell at five. He played a Lonely Sandbar and gave it back.

Russell untapped and showed him Torrent of Fire for his Wall. Fung had Dispersal Shield, but couldn't cast it thanks to the Sandbar.

The deciding game took an age, but there were a few points of interest. First, Russell kept a land-heavy hand with few early plays, and drew a lot of land to follow. Fung had the anemic beatdown of Crypt Sliver and morph, but against Russell's empty board, it looked strong. He revealed his Willbender on Russell's Lay Waste, setting Russell even farther back. Still Fung had no beaters. He made a Mistform Wall, and when Russell still didn't do anything, he Clutched up the Wall to start beating for four. 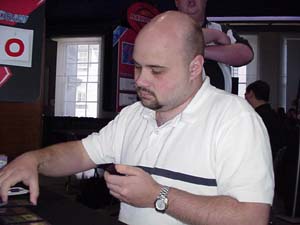 The following turn, Russell showed him a doubly-amplified Feral Throwback. Russell tried to provoke away the Wall, but it just turned into a Sliver and regenerated itself. Again, Fung had the Frozen Solid. And so the stalemate began.

Creatures came down on both sides. Gournas and the like from Russell, tricky blockers for Fung. Neither could get through. Fung's best shot, a Glintwing Invoker, was Solar Blasted out of the sky before it could be a problem. That's about when Fung started to draw every land in his deck. Russell couldn't beat through, but his army was growing. Then came the Wellwisher. Fung, holding Clutch of Undeath, knew he wouldn't be able to beat through Russell's forces, so the game would come down to decking. He needed to draw Dispersal Shield before Russell played his Words of War.

Ironically, the turn before Russell played the Words, Fung drew Hindering Touch, which he'd boarded in for a Dispersal Shield as defense against Feral Throwback. Russell remembered to pay the four for the Touch, and Fung had no outs. The game went to time with Russell just barely short of Wordsing Fung out. Since a draw would eliminate both of them, Russell conceded, in hopes that Fung would make Top 8.