Round 9: Jeff Fung vs. Pete Radonjic 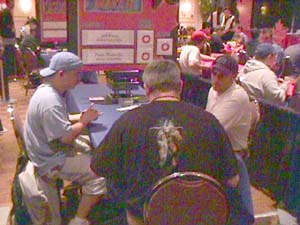 Pete Radonjic was once one of the top players in Canada. His accomplishments from back in the day include a Top 8 PT Columbus, a Canadian National Championship in 1998, and another appearance on the team in 1996. But after Nationals in 2000, he took quite a vacation. He's only here today because his friend Terry Lau called him to tell him he was qualified via rating. Radonjic then went on a four-week crash course of the last seven expansions in constructed and the entire Odyssey Block in draft.

Whatever he did, it worked. Radonjic is currently 6-2 and is in good shape for another Top 8 run.

Across from him sits fellow British Columbian, Jeff Fung. Fung is also 6-2, and gave Radonjic one of his two losses in constructed yesterday. Radonjic was out for revenge for the Round 2 defeat.

Radonjic sat and thought for a long time about whether to mulligan his three-Island many-black-spells hand. He eventually decided to keep, and it cost him.

His first play was a Wormfang Turtle, which doesn't help with mana issues. The 2/4 did a good job of holding off everything Fung put out, including Nullmage Advocate, Gravegouger, and Nantuko Tracer. But Radonjic had nothing to do except put out a Cephalid Scout that was dispatched with a Chainer's Edict. 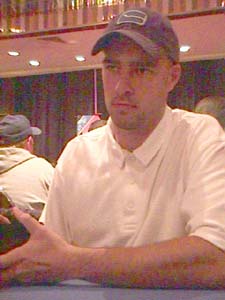 Fung grew tired of the Turtle and hid it under a Faceless Butcher. Radonjic didn't want to get hit, so he used Deluge as a Fog. Radonjic eventually drew a Swamp and used it to Toxic Stench the Tracer, and then Waste Away the Butcher mid-combat, wiping out a good portion of Fung's team. But Fung had more guys, and Radonjic had no life to play with. He came very close to stabilizing, but was eventually overrun. Those early turns of doing nothing really hurt.

Radonjic: "I had to keep that hand; I have a good chance of drawing a Swamp by the third turn. And by good chance, I mean 55%."
Fung: "What are you, some kind of mathematician?"

Radonjic went first in Game 2 and cast Peek during his first main phase, commenting, "I don't know why I don't wait until you draw, but whatever." The Peek showed Fung to have three different basic land types and a few small creatures.

Radonjic put out an Aquamoeba on turn 2 and did nothing on turn 3, leaving mana up. When Fung attempted a Cartographer, Radonjic tapped two and flashed Grip of Amnesia.

Radonjic put out a Childhood Horror for offense and the Wormfang Turtle to play D. Fung had his own defender in the form of Krosan Archer, but Radonjic had Coral Net. Fung chose not to upkeep it.

Both players kept putting out ground creatures, and the Childhood Horror chipped away at Fung in the air. Fung eventually dealt with it with a Patriarch's Desire, but Radonjic put out another flier – Cephalid Scout – and enchanted it with Shade's Form. 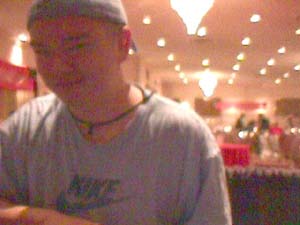 Fung put out a Nullmage Advocate with hopes of destroying the Shade's Form. It wouldn't be enough, however, as Radonjic had drawn a Gravedigger and used it to salvage the Childhood Horror. The Horror came back down, and Radonjic pitched a bunch of cards to his Earsplitting Rats to achieve threshold. Fung had no answers.

Before Game 3, Radonjic asked Fung if he wanted to draw. Fung hesitated, weighing his options of how many rounds were left and if could afford another loss. Radonjic help Fung make his decision by showing him the Persuasion that he had hiding in his deck. That was all the persuasion Fung needed. "I knew your deck was good against mine, especially the two Aquamoebas and the Coral Net," Fung told Radonjic, "but that Persuasion is too much."

Their decision to draw worked out perfectly, as their tiebreakers placed them in different pods for the second draft. Fung ended up in 7th place after round 9, putting him at table 1, and Radonjic in 9th at table 2.