Round 9: Jens Krause vs. Martin Struik 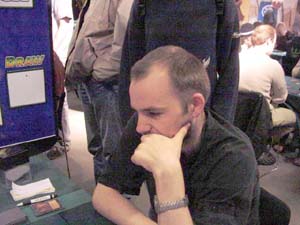 While Jens Krause and Martin Struik may not be the most well known of players both have found themselves unbeaten at the top of the rankings with 8-0 records. Dutch player Struik finished 9th in GP Antwerp way back in 1998 and hasn't had much success since. Krause is having a good time of it recently after making top 8 in GP Hamburg a couple of weeks ago.

Krause managed to carve out most of the blue cards to himself in the draft and started game 1 with a number of janky wizards. Imagecrafter and Aphetto Alchemist swung for a little early damage although he had to cycle an early Choking Tethers to compensate for a missed land drop. Struik snuck a morph card onto the table. Krause let it through only to see a Haunted Cadaver detonate most of his hand.

The German still looked solid as he summoned a Mistform Dreamer, turned it into a wizard and then pumped it to four a turn with a Ghosthelm Courier. Still stuck at three land Struik scooped to the army of janky little wizards. 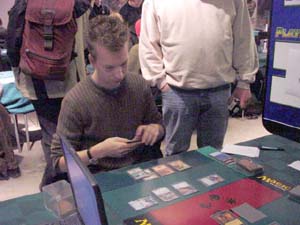 Krause missed his third land in Game 2 but an Information Dealer soon arranged the top of his library in a manner to pull out. Struik's deck was only chucking out janky little dudes as well and a Mistform Wall was perfectly adequate to hold off a Nosy Goblin and a couple of its Festering brethren. Struik was still able to pick away for one a turn with a Goblin Sky Raider.

Krause added a mystery morph guy to his team and continued to use the Information Dealer to try and find something useful. Riptide Shapeshifter seemed to fulfil that criteria quite nicely.

He never got a chance to use it as Struik summoned a Skirk Fire Marshall. Krause read it carefully but as Struik had four other Goblins they all teamed up to send the board to fiery oblivion. The Marshall survived his own carnage only for his team to backstab him as two Festering Goblins hit the bin and had no other targets. Well, what do you expect from goblins.

After the firestorm Krause snuck his own morph guy through, it changed into a Riptide Entrancer and stole Struik's Severed Legion. Struik only had another morph guy, a Charging Slateback, that suddenly found itself becoming a wall every turn because of a Mistform Mask. A Cruel Revival took care of a Mistform Dreamer, and conveniently fetched a Festering Goblin to stop his own Legion. Struik was out of gas though, and when an Aven Fateshaper swooped in on Krause's side the end was not long in coming.