Round 9: Jon Finkel vs. Steve O’Mahoney-Schwartz 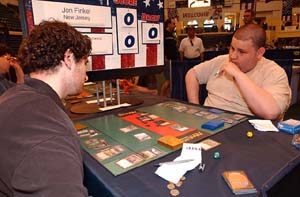 Magic is a social game. Yes, the mathematics and card interactions are important, but in the end, without someone to play with, you can't get a game in edgewise. While the Pro Tour is a little more serious than your average basement game, the friendships seen in your local shops persist in much the same way, except the friends in this case propel one another to cash, fame and glory.

Rubin-Kibler, Budde-Baberowski, Pikula-Price...you've heard them all mentioned in their dedication to one another, but through the game's history, one such relationship has stood above all others: Finkel-OMS. Jon and SteveO have been friends for close to eight years, meeting before high school and staying close up until the present. Unfortunately, with both players at 5-2-1, they sit on the bubble, needing to win out to make day three, and with both in precarious PT points positions, entry into World Championships is at stake. While both players want on the team pretty badly, Jon Finkel's desire may have forced him to push a little too far.

Sitting next to Jon in the draft, SteveO received a fourteen card Odyssey pack from Finkel with a missing rare, and after the draft asked if Jon has picked a white card. 'Yeah' Jon replied 'I took Wayward Angel'. Steve walked away satisfied, but when he played Eric Taylor in the second round of the draft and started discussing his upcoming match with Finkel, Taylor corrected him, informing the PTLA 4 champion that Jon had actually drafted Kirtar's Wrath. With a head full of steam and vengeance on his mind, Steve headed to the feature match pit ready to go to war, with his best friend on the other side.

Jon, playing first, put an Island, Swamp and Plains into play before playing his first creature, Soulcatcher. Steve retaliated with a somewhat superior specimen in the form of Skywing Aven, and after Jon passed his turn, the two flyers collided during Steve's combat phase, with the Aven going home while the 'catcher lived thanks to a post damage Prismatic Strands.

Jon played a fifth land and cast Aven Flock after the Skywing Aven came back out, and Steve, unable to get through the big white flyer, could only cast Aven Fisher and pass the turn. The Flock came in for two damage before Militant Monk entered play and was immediately enchanted by Ghostly Wings, emptying Jon's hand with two each of Islands, Plains and Swamps in play.

The Fisher attacked, trading with the flashed back Prismatic Strands, allowing Steve to draw the second Swamp he'd been lacking. He tapped the black lands and an Island to cast his main deck Slithery Stalker, taking the Monk and killing the Wings while Jon's hand was empty, and then a turn later, after attacking for three with his two creatures, cast Faceless Butcher, removing the Aven Flock from play.

Things were looking pretty bad for Jon, but Aven Smokeweaver would help with trying to slow Steve down. With the score 16-14 in Finkel's favor, Steve brought out a very large Face of Fear, leaving Jon on the defensive. When Steve attacked with everything on his next turn, Jon had Guided Strike ready, taking six while killing the Butcher and giving Jon back the Flock. Steve then cast Dusk Imp and Whispering Shade (with three Swamps in play) and ended his turn. 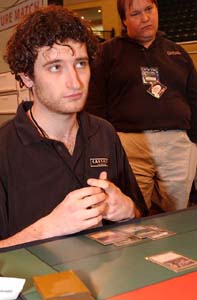 Jon drew, asked how many cards Steve had in hand (two), then paused for a long time before attacking with The Smokeweaver, taking the score to ten each and killing the Shade with Patriarch's Desire. With Jon leaving two Plains untapped, the Flock seemed up to holding down the fort, but Steve Ghastly Demised the 2/2 Soulcatcher and attacked with everything, with Dusk Imp dying en route to Finkel going to four. Jon attacked with the Weaver, taking OMS to eight before casting Benevolent Bodyguard. Steve untapped and drew, activating Face of Fear's ability and attacked with it and the swampwalking Slithery Stalker, ending the game.

Jon started things with style, playing Benevolent Bodyguard then attacking with it as his only actions for the next three turns before Steve cast Toxic Stench during Finkel's fourth combat step. Jon replaced the 1/1 with Soulcatcher before playing a somewhat better flyer, Hydromorph Gull on turn five, with Steve only mustering Dusk Imp, tapping out to do so, on the following turn. The Imp traded with the Prismatic Strands in Finkel's hand before Jon played the tough to kill Skywing Aven, with Steve's next turn seeing a fourth land and Aven Fisher hit the table.

After Jon cast Cephalid Sage, OMS made a nice play, casting Aven Fogbringer, returning his one Swamp to his hand, playing it and Ghastly Demising the 2/2 Soulcatcher. Jon sacrificed the Hydromorph Gull, then untapped and attacked with everything, with the Soulcatcher trading with both of Steve's creatures, taking him to four life. OMS drew and cast Mental Note, played a Swamp and Faceless Butcher removing the Sage, went to two as Militant Monk entered play, and then cast Balshan Collaborator, seemingly stabilizing the table. Jon drew, thought and passed the turn.

Steve's next play was a crippler: Cabal Torturer. The 1/1 could kill anything on Jon's side with it's pre-threshold ability, and Steve actually had threshold, meaning that larger threats could be dealt with. Jon, still without a Swamp, could only draw and pass the turn, with the Aven returning to his hand when Steve tried to Torture it, but things were definitely going OMS' way. Steve untapped and used the Torturer to kill the Monk. Attacking with the Butcher and Collaborator, with Jon using another Strands to prevent blue damage and taking one. Jon drew and cast Angelic Wall, which didn't block in light of the two Strands in the graveyard, but that may have been a mistake, as OMS then cast Famished Ghoul. Jon cast Skywing Aven, which Steve promptly sent back to his hand with the Torturer. 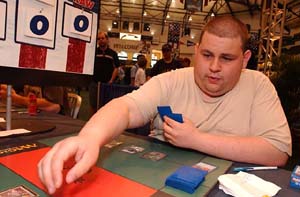 Steve attacked with everything but the Torturer on his next turn, with the Wall getting a Guided Strike in order to draw Finkel a card. After combat, with Jon at eight, Steve cast Rat's Feast for five, removing the two Strands amongst other cards, and the end seemed to be near. Jon played Seafloor Debris and cast Aven Smokeweaver. Steve drew and cast Slithery Stalker, attacking to kill the chump blocking Smokeweaver, and a turn later, Jon admitted defeat.

After the match, the two had words, most of which are not publishable here, but Steve made a valid point: If Jon didn't want to share that information, he should have just told Steve so instead of lying to him. General consensus amongst the assembled was that Finkel, a poker enthusiast who is as a result used to lying to friends amidst competition, was wrong to jeopardize his friendship, and that no match was worth it. Steve admitted that he wouldn't be pissed off forever, but maintained that he should be forgiven for staying angry through the day. After seeing the whole drama play out, Randy Buehler said 'A lot of people were saying Steve should have thrown his deck at Jon or never forgiven him, but I think ending his career was good enough'. Jon later apologized for his error in judgment.