Round 9: Kai Budde vs. Brian Davis 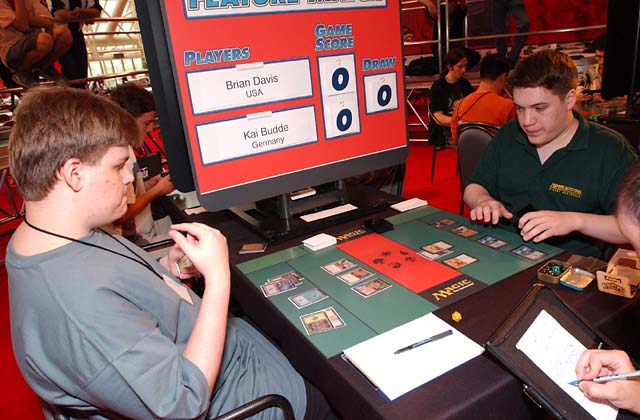 Brian Davis came in ninth at Worlds last year, and is last year's Rookie of the Year; his key accomplishment that season was a Top 8 at Pro Tour-Chicago (1999). He was not happy with the colors he ended up in - white-blue-green, with a small black splash - but he was happy with the specific cards he got in those colors. Going into this match, he was 1-0-1 in the draft and 6-1-1 overall.

Kai Budde: you know him, you love him, now see the movie! He had a very stable draft in blue-white, with a late black splash. He represented the nightmare matchup for Brian's deck: the current World Champion, sporting Flagbearers.

This report, as our more astute readers can imagine, will be short. Not even this reporter's long-winded style can help hide the fact that, even though they were the only matchup with a deck check, these guys finished before the other three Feature Matches. 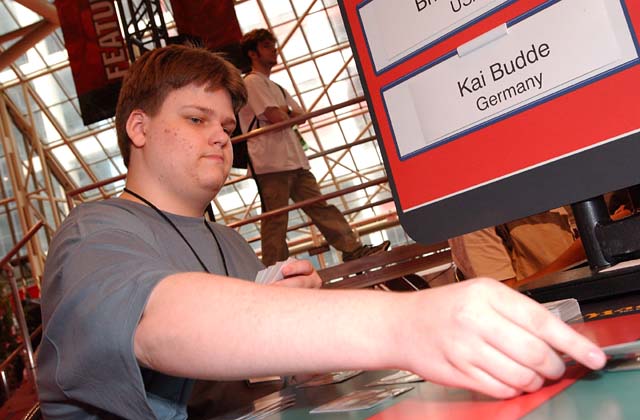 Brian Davis Brian's first play was a Helionaut, which should bring our slower readers up to speed on the expected final outcome. It swung once before Kai clogged up the skies with a Glimmering Angel, followed by a Standard Bearer, followed by a Hunting Drake (to Time Warp via Brian's tardy Llanowar Knight), followed by an Aurora Griffin.

Brian's midgame creatures - Benalish Trapper, Alpha Kavu, Enlistment Officer, and that errant Llanowar Knight - found a champion in Fungal Shambler. (The Helionaut filtered for black.) But before this reporter could rally the crowd to the cheer, "Helionaut wins! Helionaut wins!" Kai showed what a blue-white deck can do in an Apocalyptic age: Order.

The American's Rushing River could only delay the continuing air assault . . . and when Kai flipped over his 13th draw and showed Death Grasp, Brian conceded, "I think you had this game, anyway."

In game two, Brian chose to draw first, since Kai had chosen to draw first in game one. It didn't help much. On turns three through six, Kai played out:

While Brian's single sideboard card - Hypnotic Cloud (in for Hobble) - then showed up and flushed out a Death Grasp and Confound, Kai had enough board power to take game two, and the match. Brian was very gracious in defeat, even though he must have wished for his Mystic Snake or Stormscape Battlemage to show up for at least one of these games. Without either, Kai's deck is simply too much for a green-based army to handle.