Round 9: Kai Budde vs. Gert Coeckelbergh 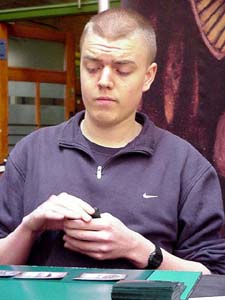 We are finally covering a Kai Budde match. Probably the best player of the world. Leading the race for Player of the Year to achieve this title for the third time. The only person in the world to have won five Pro Tours.

Gert Coeckelbergh is no newcomer to the game. Between many achievements his most notable are Top 8 at the 2000 European Championship, three-times national team member and 18th at Worlds 2000.

Kai chose to play first and had to take a mulligan straight away. On his second turn he summoned a Nightscape Familiar. Some turns after Gert finds his Familiar too. Budde then put a Psychatog and a Merfolk Looter into play.

After some turns Coeckelbergh gets a bomb Fact of Fiction with Ghastly Demise, Fact or Fiction, Upheaval and two Circular Logic. Here is how the German split them up:

Gert took the first pile and countered a Psychatog the next turn then playing two Psychatogs of his own. The German on the other side tried to get a Fact or Fiction through but was thwarted by Circular Logic.

Next turn, Budde Upheavaled but forgot to leave a mana in his mana pool. He was only able to cast a Familiar one turn after. The familiar on Coeckelbergh's side fell victim to the Flametongue Kavu that was supposed to start pounding on Gert. Instead Goeckelbergh cast a third Psychatog.

Meanwhile Kai had summoned 3 Nightscape Familiars enabling him to cast Flametongue Kavu for one red mana and later on a Deep Analysis for one blue mana. The German had taken control of the game and now had a Psychatog out but only for few moments since it was repulsed. When Budde tried to cast two Fact or Fiction they got countered and Coeckelbergh realized, that his opponent hadn't countered anything yet.

Next turn Kai played another Upheaval with 3 mana spare and Gert scooped. 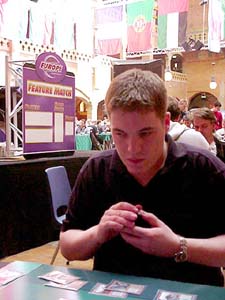 Both players acted more controllish this game and the first play was Coeckelbergh's Duress revealing a brutal hand but with no more land other than the three already in play. Only 3 turns after did Budde find a fourth land to be able to cast his Fact or Fiction. So he did and it revealed :

The German preferred the two Islands plus the edict and was able to counter his opponent's Psychatog. Two turns after he had another Fact or Fiction revealing five lands.

Gert has nine lands in play threatening Budde with a Polar Kraken. Kai on the other hand found more than land and was drawing cards off Deep Analysis and attacking with his three copies of Nightscape Familiar.

Coeckelbergh got out a Psychatog and a Familiar but holds only two cards in hand. A Duress fished out his only counterspell and left him with Repulse. Kai decided to cast Upheaval leaving him with seven mana in his mana pool and though Gert tried to counter it with Circular Logic he knew he was already done for and scooped.