Round 9: Kai Budde vs. Kamiel Cornelissen 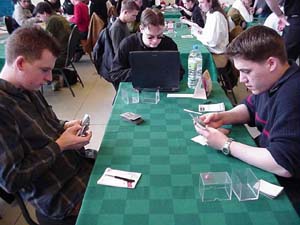 Kai Budde vs. Kamiel CornelissenThis promised to be a real clash of the titans. Kai Budde is the five times Pro Tour winning, five times Grand Prix winning German Juggernaut. His opponent, Kamiel Cornelissen, is one of the few players who can consider themselves a serious contender for his crown. The Dutchman managed back-to-back second place finishes at Pro Tour Chicago and Pro Tour Los Angeles but only recently managed his first title at Grand Prix Heidelburg.

Cornelissen went first and his first play was a Stern Judge on turn 3.

The Judge's ability wouldn't see much action this match as Cornelissen had drafted a green-white deck while Budde had the same plus blue.

At this point both their decks might as well have been mono-white as both had a bunch of plains. Budde was able to sacrifice an Abandoned Outpost to bring a Mystic Enforcer into play to go along with his Patchwork Gnomes.

Cornelissen dropped a Floating Shield set to white on his Stern Judge to hold off the Enforcer. It didn't stay in play long as an Aven Cloudchaser came into play on Budde's side. Cornelissen couldn't even sacrifice it in response because of the protection from white it had already and Budde swung with the Enforcer and Gnomes

Cornelissen finally found his first forest and summoned a Krosan Avenger. Budde attacked with the Enforcer anyway and both players saved their creatures with Shelter.

Churning Eddy dealt with a Seton's Desire on the Avenger and Budde swung again to leave Cornelissen on 2. The next turn he pitched enough cards to the Gnomes to gain threshold and finished the Dutchman off with a dragon-size Enforcer.

"Look what my deck becomes after boarding," Budde said, flashing me four different colours as he brought in Grotesque Hybrid – a bomb worth splashing against green-white when you have three sac-lands.

Cornelissen started very quickly in game 2, storming out of the gates with a turn 1 Basking Rootwalla and turn 2 Mystic Visionary. Budde attempted to block with Mystic Familiar but Cornlissen saved the creature with a Shelter.

Cornelissen's attempt to maintain the pressure with an Otarian Juggernaut was countered by a Rites of Refusal. Budde looked to get back into the game by ambushing the Visionary with a Teroh's Vanguard and then dropping a Rabid Elephant.

Then Cornelissen dropped one of the obscurer rares that had been hiding in his sideboard – Earnest Fellowship. All creatures gain protection from their colours and suddenly Budde's blocking options were much limited.

In the end there were just too many creatures that Budde couldn't block.

Cornelissen's draw meanwhile had gone horribly long. He'd drawn only forests and missed a land drop on turn four before he managed to get a Krosan Archer into play to hold off all but the Windreader.

Budde was too far ahead and perfectly happy to send all in next turn and eventually swarmed the critically colour screwed Cornelissen to take the match.