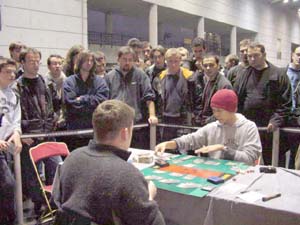 Last round of the day and again Kai Budde is in a situation where a loss would dump him out of the tournament. At 7-2 the German superstar needs to win to advance into day two. Budde is running The Rock, splashing red for Terminate. His opponent Mark Antoine Hernandez is running a more old-school version of the same deck.

Budde won the die roll and elected to go first.

His opponent got in the first Duress and stripped Living Wish from Budde's hand. From there it was a steady build up of Birds, Treetop Villages and the usual Rock suspects.

"Yes, it's the stupid mirror," said as he summoned a Yavimaya Elder.

Budde Therapied for a Spiritmonger only to find Hernandez was running older school Rock with Deranged Hermit. Budde summoned Genesis then sacked it to Therapy away the Hermit.

Hernandez got in a swipe for 8 but Budde cast first one Spiritmonger, then another, and with Genesis in the graveyard looked to be in control.

Hernandez wasn't to be outdone as he tutored for Recurring Nightmare and started a squirrel factory going with the Deranged Hermit. The two Spiritmongers no longer looked quite so impressive.

All Budde could do was get back and summon a Yavimaya Elder. If he didn't have a Diabolic Edict Hernandez could attack and kill him. Hernandez didn't see this and instead chose to overplay a little by generating a ton of squirrels. This left the German an out if he could draw Pernicious Deed. He didn't and was run over by the Squirrel Horde.

Budde thought about it and chose to play. He looked at his hand and was forced to throw it straight back. Hernandez also decided to do the same. 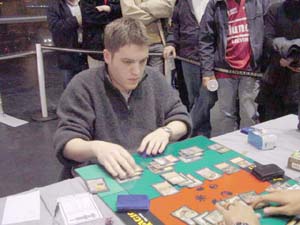 Hernandez missed with his first Cabal Therapy, but then took out a Baloth with his second. Budde hit with a Treetop Village, but that plan was scuppered as Hernandez dropped his own Baloth.

A Duress took out the Terminate from Budde's hand and after he lost both Treetop Village and Elder gang-blocking the Baloth the German was left with only land.

A second Elder netted a few cards as Budde looked to find answers to Hernandez's Spiritmonger. Living Death seemed appropriate although a Deed from Hernandez returned parity. By this point Budde had drawn something like 8 lands out of his deck with Elders, leaving nothing but good stuff.

A Vampiric Tutor found Budde Buried Alive and he used it to great advantage by putting Spiritmonger, Genesis and Filth into his graveyard. No longer able to block Hernandez looked in real trouble.

Budde started to get back his monsters and bashed Hernandez about a bit. Hernandez resolved Living Death, but as Budde could sacrifice all his monsters in play all it achieved was to pull Filth out of the graveyard and into play where it was far less dangerous.

Time was starting to become a factor with only ten minutes left. A draw would do Budde no good and he was still 1-0 down.

He sacrificed his elders to find an answer. He found a deed and wiped the board of everything except his two Mongers and Genesis. Hernandez held on for a turn but succumbed soon afterwards.

With only 6 minutes remaining a draw would do neither player any good. As both were playing the Rock any kind of quick result seemed unlikely. Budde didn't seem to have any forests but a Buried Alive quickly loaded his graveyard with Genesis and two Baloth.

Meanwhile Hernandez got a recurring nightmare going to dig some land out of his deck with an Elder. 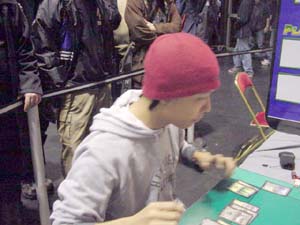 Budde dropped a Spiritmonger, hoping for some kind of quick kill. Cabal Therapy left him with no hand but Genesis was lurking in his graveyard to keep a steady stream of monsters.

Time was called with Budde needing to do thirteen damage. He had an unblockable Spiritmonger but Hernandez kept recursing Baloth with Recurring Nightmare to stay out of danger.

A missed Cabal Therapy revealed Hernandez was also holding two Deeds. With only a few extra turns remaining it looked very tough for the German juggernaut.

Hernandez had plans for day 2 of his own. He attacked with Baloth and Phyrexian Plaguelord to drop Budde to 8 and then summoned Genesis to bring the match to an exciting finale.

3rd Extra turn and Budde got back a Ravenous Baloth with Genesis. An attack with Spiritmonger knocked Hernandez to 1.

4th Extra turn and Hernandez ripped Coffin Purge off the top, stripping both Genesis and Filth from Budde's graveyard.

5th extra turn and now Budde couldn't win. Living Wish brought Filth back into the game, but not into the graveyard where it was needed. Hernandez had enough creatures to block and the game seemed certain to end in a draw that would knock both players out.

A player could concede but they couldn't discuss this or use another method to determine the outcome so with resignation Budde marked the sheet 1-1, signed it and handed it to Hernandez. Hernandez chose not to sign it and instead spontaneously conceded to Budde. The Juggernaut had been handed a lifeline and would be competing in day two after all!