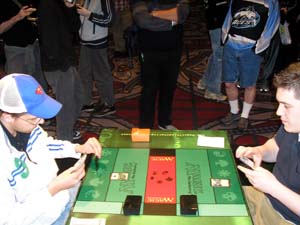 After starting his tournament on a 6-0 tear, the German Juggernaut hit some bumps along the comeback trail as soon as he set foot in the event hall Saturday. He took two quick losses to White Weenie on Day Two and found him staving off elimination against Mark Herberholz, one of many players in the TOGIT-Dutch squad.

Kai's deck was a metagamed black-white deck with abundant removal, the Sensei's Divining Top/Journeyer's Kite search engine, and maindeck Night of Soul's Betrayal which could give Herberholz's deck fits (since relies on a Hana Kami recursion engine). Kai, who had worked with TOGIT for some events in the recent past, did not collaborate with the Osyp-led squad for Pro Tour-Philadelphia. Instead, he worked with a small group of local qualified players back home.

Mark's deck was a four-color Gifts deck that centered on Hana Kami. Herberholz is known mostly as a Limited player and this was the first time he had ever needed to set a Saturday wake-up call at a Constructed event. He was not relishing the challenge of getting past Budde to keep his tournament moving forward - especially when he heard that this was a bad matchup for him.

Mark led off with Sakura-Tribe Elder for Mark on the draw. Distress from Kai found a hand of Gifts, Cranial and three lands. He took the Extraction. Mark promptly sacrificed his Elder to ramp up to four to rig his yard for the Gifts engine, and at the end of Kai's uneventful turn three he revealed Hana Kami, Soulless Revival, Eerie Procession and Cranial Extraction. Kai gave him Kami and Cranial.

Mark untapped and named Cranial Extraction and saw a hand with two Final Judgments, Night of Soul's Betrayal, Yukora, the Prisoner, land, and Ink-Eyes. Kai untapped and played the enchantment which shuts down Kami engines, Meloku, and Sakura-Tribe Elders. Had he named Night of Soul's Betrayal, this might have been a much shorter game -- but Herberholz could not possible win if Kai pulled off a Cranial Extraction at any point in the game for one of the deck's key puzzle pieces.

Kai untapped into Yukora, the Prisoner and began attacking into Herberholz's empty board. Mark began spinning a Top for answers but a good portion of his deck was effectively mulliganed by the legendary enchantment. Mark shuffled his deck a couple of times with Kodama's Reach; he had plummeted to 8 from the Prisoner. He looked helplessly at his eleven lands and stepped away to talk with a judge.

Kai leaned back and knew that Mark had only two more turns to find his out, "He is basically just searching for his one Wear Away…"

Mark slid back over to the feature match table and elegantly pointed his Wear Away at the Night of Soul's Betrayal. He held the pose for a second and smiled, "Found it!" 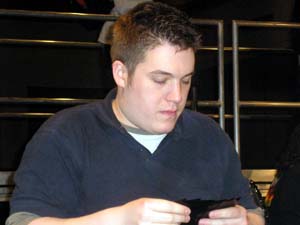 Kai needed a Night of Souls' Betrayal, to no avail.

Kai thought about how to play the next turns. He was in danger of getting caught under the gears of his opponent's deck. He used Sickening Shoal on the Hana Kami at the end of the turn. Mark activated it to return Soulless Revival. Kai attacked Mark down to four (pending any shenanigans) -- Hideous Laughter with a spliced Soulless Revival for Hana Kami were the shenanigans in question. Kai had some tricks of his own in store, though. Mark went to take the three damage from the Prisoner but Kai snuck Ink-Eyes in through the back door and got in for five. He stole a Sakura-Tribe Elder to boot.

Mark played Hana Kami and went for the Haze lock thanks to his returned Eerie Procession. Kai sacrificed the Elder end-of-turn and got a fresh view of the top of his deck which featured land and pair of Terashi's Grasp. Kai attacked and made Mark use the Haze. He took a look one card deeper was not pleased with the results. Journeyer's Kite let him shuffle for a swamp and he looked again -- this time at two lands and a Prisoner.

Kai kept digging for Night of Soul's Betrayal while Mark dispatched the ninja with Final Judgment. Kai needed to not only find the enchantment but also catch the Hana Kami in the graveyard. If he just played the enchantment with an active Kami, Mark could activate in response to return Wear Away. Kai Kited on upkeep and topped for three more cards that were not what he wanted to see. He replayed his Prisoner although he had a second Journeyer's Kite and could have gained an extra shuffle effect per turn.

Hana Kami retrieved Cranial Extraction and the engine rumbled to life. Mark named Distress with his Extraction and saw a hand with the two Judgments from long ago, land, and the Kite. Kai took advantage of the shuffle effect to look at a fresh set. He Kited on upkeep and once again before his draw. He attacked with Yakura - giving it fear with Death's Storehouse. Mark sacrificed his Kami to Haze for his survival. Kai felt that he had cleared and significant hurdle and played the freshly drawn Night of Soul's Betrayal.

Mark gave Kai a grunt, "Uuuunh!" as he fired off another Wear Away at it from his hand.

Mark used Sickening Shoal to take out the Prisoner and rather than burn his Kami on the Haze cycle. This way it was on the board ready and able to fetch Wear Away should a third legendary enchantment appear. Kai used Final Judgment and Mark sacrificed his Kami for Wear Away. Kodama's Reach splicing Revival brought it back for more. Kai dug for another land and the total number of lands in play teetered on 30.

Night of Soul's Betrayal meant Wear Away splicing Soulless Revival. Kai was holding yet another copy in hand but when Mark retrieved Cranial Extraction that was all Kai needed to see to move to Game 2.

Mark was pumped to be a game up; he bit his lip and made that grunty noise again. When asked how he would describe it, Herberholz thought for a second, "I don't know…pure happiness?"

Kai sighed. "Most Gifts deck run only one Extraction and one Wear Away. You run two…Wear Away is very good against me." 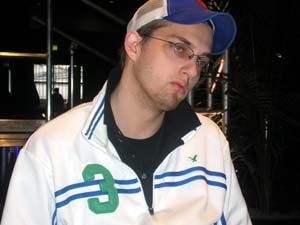 Herberholz knew elimination could be only a few minutes away.

Kai could feel the bricks of the wall leaving little grooves in his back. After opening on two straight losses to kick off Saturday, a Game 1 loss made this a must-win game. Kai looked at a hand with Ink-Eyes and six lands and had to send it back. The two players discussed mulliganing; apparently Mark had mulled down to four earlier in the day. Kai was unwilling to mulligan down to five and kept a hand with only one land to kick things off.

Kai played one land but missed his second. Mark had Nezumi Shortfang. Kai found his second land a turn later and cast Distress and saw a handful of expensive spells, one land, and another Nezumi Shortfang. He took the dupe and passed it back to Mark. Kai seemed to sense this was not his weekend when Mark ripped a Top right off the top.

Kai was stuck on three land, discarding Hero's Demise after Hero's Demise to Shortfang while Mark's deck rounded a corner with Kodama's Reach -- which would turn on Eerie Procession and the Hana Kami he was holding. It also allowed him to play Kodama of the North Tree.

Kai drew another futile card and extended the hand. A perfect Friday turned into a nightmare Saturday and the German Juggernaut was going home.