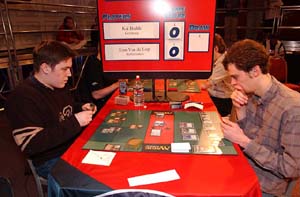 Unlike other competitions, the World Champion of Magic is not necessarily the best player. Not many people will argue against the championship Los Angeles Lakers being the best basketball team in the world, and it's reasonable to think that the Arizona Diamondbacks were the best baseball team in the world last season. Tom Van de Logt is the reigning Magic world champion, but Kai Budde is almost unanimously considered the best spellcaster to ever pick up a library and duel. This match is a contradiction of sorts: the World Champion against the best player in the world. Budde is a former World Champion himself, and it's interesting to note that this Feature Match represents two of the three European Magic champions, with the other being Alexander Blumke.

Budde started off with a first turn Diligent Farmhand, while Van de Logt brought out Think Tank on turn three, but had to sacrifice Bog Wreckage for the blue mana necessary to cast it. Meanwhile, Budde sacrificed his Farmhand. This put him up two lands on Van de Logt. He went right for the throat, bringing out Aven Fisher and Aven Windreader. Van de Logt answered back with his own Fisher, but Budde continued to build his side with Nantuko Disciple and Phantom Whelp. Van de Logt put Zombify into the graveyard, as both players joked sarcastically about the great combo in his deck. 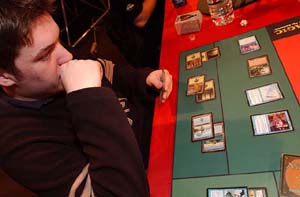 Van de Logt summoned a Windreader of his own, but Nantuko Disciple dominated combat as usual. Budde then brought back out two sub-optimal little beaters in the form of Phantom Whelp and Escape Artist, to the amusement of Van de Logt. With the help of the Disciple, Budde punched through Van de Logt's defense to take the first game.

Budde brought out a Phantom Whelp on turn two, while Van de Logt started off with Think Tank. Deep Reconnaissance accelerated Budde up to five mana a turn early, and he played Elephant Ambush on Van de Logt's end step to match the World Champion's Aven Windreader. The elephant attacked for three, and Budde played his own Windreader, which got taken down with Ghastly Demise. Budde brought out Phantom Whelp and Escape Artist, which got a laugh out of both players. Budde joked that he was thinking about Syncopating his own Phantom Whelp. Van de Logt used Windreader on end step to look at Budde's deck, which revealed a Rites of Refusal. The German Juggernaut attempted to strike fear into the heart of the World Champion by revealing his lethal draft strategy as he declared, "Counter-Whelp!" 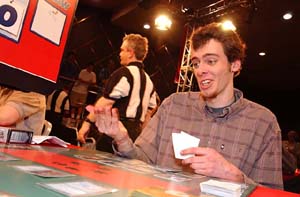 Van de Logt's Scrivener brought back Ghastly Demise, and traded with Phantom Whelp. The Champ was actually down to eight life points, staring down Escape Artist and an elephant token. He did have Ghastly Demise, which targeted the elephant. Budde responded with Refresh and Van de Logt read the Demise again, making sure it did allow regenerating. The Champ commented, "That's the worst!" while Budde put in his own two cents: "It's not even a real Banishing". Budde's elephant and Escape Artist continued on their path of destruction, and a 5/5 Springing Tiger joined the team. Van de Logt went digging for answers with Cephalid Scout, but Budde picked up the win with a Muscle Bursted Escape Artist.