Round 9: Ken Ho vs. Dave Humpherys 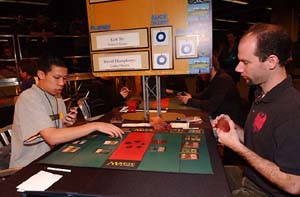 Ken Ho won Pro Tour Osaka last year when the format was Odyssey Block Constructed, thanks to his blue-green deck and the mana consistency that one Tarnished Citadel provided! Dave Humpherys has a staggering list of accomplishments from Grand Prix and Pro Tour Championships to multiple strong finishes on Sunday. He is a member of Your Move Games, a team well known for dominating Constructed events, but not exactly synonymous with success in Limited outside of Team Rochester. Both players came into this match at 5-2-1.

Ho had a one-drop in Festering Goblin, and Humpherys dropped down Wall of Mulch. Gustcloak Harrier died to a Shock, and Humpherys had no play on turn four. Ho cycled, and summoned Glory Seeker. Krosan Tusker was cycled to provide Humpherys with some card advantage, but he still had no cards to play on turn five other than land. Ho attacked for a point of damage, and played a morph. Humpherys finally brought down a threat when he played Symbiotic Beast. Ho's morph was flipped over to reveal the dominating Exalted Angel, and Humpherys was in a tough spot to handle it with his red/green deck. He shrugged and played Erratic Explosion on the Angel, looking up to the sky with an expression that said "I can't believe I'm doing this" more than "I'm praying for a five casting cost card." Unfortunately Humpherys was not too lucky, and the Explosion hit Slate of Ancestry- one damage short. Despite playing a second Symbiotic Beast, Humpherys couldn't outrace the Angel. 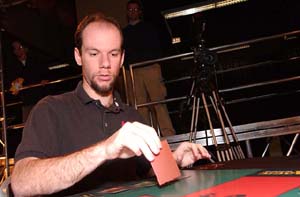 Glory Seeker provided Ho with a good start on turn two, but Humpherys had Thoughtbound Primoc. Wretched Anurid gave Ho another solid creature, but he missed his third land drop. Humpherys followed with Goblin Sharpshooter. Ho was still stuck at two lands and shook his head, cycling Dirge of Dread to find one. He attacked with Glory Seeker and the Anurid, and Humpherys did not call Ho's bluff by blocking the Seeker, and took five damage. Humpherys wasn't doing much better in the land department, but at least he was stuck at three and could play a morph creature. Festering Goblin gave Ho a way to potentially handle the Sharpshooter, so Humpherys simply flew over with the Primoc for two damage. Ho played Cover of Darkness naming Zombies, attacked for four, and finally played a third land in Barren Moor.

Humpherys cycled Solar Blast to deal one point of damage to Glory Seeker, and the Sharpshooter pitched in to take it down. The Anurid and Goblin attacked for another four damage, and Ho played a morph creature. Humpherys used Threaten to steal the Anurid, and Ho was forced to block to stay alive. Sharpshooter's untap ability went on the stack twice, and Humpherys was able to shoot Ho for the win. 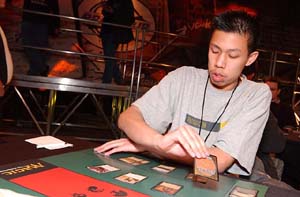 Ho curved up to start with a first turn Festering Goblin and a second turn Glory Seeker. The Seeker died to Shock, and Ho played Gustcloak Harrier on turn three. Humpherys cast a morph, and Ho attacked with his team for three damage. Ho played his own morph, and missed his fourth land drop. Humpherys' morph was not blocked, and flipped over to reveal Skirk Commando. It took down Ho's morph as Humpherys was probably hoping to hit Exalted Angel, but it was a Daru Healer. Ho swung back for three, and played Shepard of Rot and Disciple of Grace. Humpherys summoned Goblin Sharpshooter, and ended his turn. Ho got through for two more damage, bringing Humpherys to nine life points. He then tapped out for Doubtless One, which was 3/3. The Sharpshooter took out the Shepard, which was activated before it headed to the graveyard. Leery Fogbeast and a morph added to Humpherys' side, and Ho got through the air with his Harrier for an attack.

A cycled Solar Blast threatened to kill the Harrier with the help of the Sharpshooter, but Ho had Akroma's Blessing to save it; he was left with no cards in hand. Symbiotic Beast gave Humpherys even more fat on the ground. Festering Goblin and the Harrier attacked, and the Goblin was blocked by the Beast. It headed to the graveyard, and took down the Sharpshooter. This left Humpherys at one, and Ho tapped out for Exalted Angel. Humpherys played Avarax, and attacked with all his creatures in a last ditch effort. It didn't work and Humpherys conceded, showing the Pacifism he sided in, but didn't have the white mana to cast.