Round 9: Ken'ichi Fujita vs. Shuuhei Nakamura 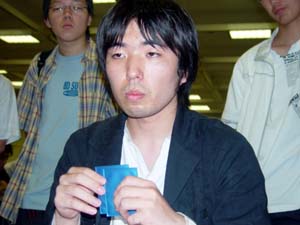 Ken'ichi Fujita is not just old school- he's ancient. The "Boss" has been playing Magic since before the game had been translated to Japanese, and is still kicking around today, putting up solid finishes in tournaments all the while. He's collected a few Grand Prix trophies and was looking to add a Nationals one to his mantle last year, but he came in ninth on tiebreakers. This time around he's started off at 7-1, and is on his way to taking that extra step towards Sunday. His opponent, Shuuhei Nakamura, is the only player remaining with no losses. Nakamura is another veteran, who has Grand Prix success under his belt, in addition to winning the traditional end of the year tournament in Japan.

Fujita played a Horned Helm, followed by Relic Barrier. His Arcbound Hybrid was countered with Condescend, and Nakamura played a Spire Golem. Fujita summoned Furnace Whelp, and Nakamura played Somber Hoverguard. Wand of the Elements gave Fujita a 3/3, and he gave it the Helm to make it into a solid threat. Fujita added a Krark-Clan Stoker to his side, and with the Relic Barrier keeping Spire Golem tapped down, Nakamura was having trouble putting together a defense. Eventually he played a Quicksilver Behemoth, which stopped Fujita's attacks cold. A second Behemoth provided even more breathing room, and it seemed that the momentum was shifting in Nakamura's favor. Fujita gave the Whelp the Helm, and it went in for an attack. Somber Hoverguard blocked looking for a trade, but Fujita had Stand Firm to make his flier survive combat. Nakamura attacked with his Behemoths, and one was killed by a Stoker/Elemental token block. Fujita now sent his Whelp through the otherwise empty sky, and increased the clock a bit with Slith Ascendant. Nakamura had Viridian Longbow to take care of the 1/1, but had no answer for the Whelp. 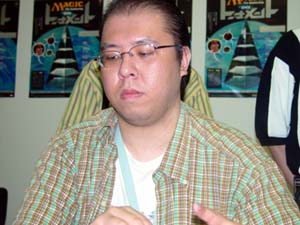 Nakamura had a Battered Golem, and Fujita cycled through Stand Firm to find some cards he could use. The Golem attacked for three, and Nakamura's Spire Golem died to Electrostatic Bolt. Fujita brought out Furnace Whelp, and Nakamura attacked with his Golem. When he played Chromatic Sphere, he forgot to untap the Golem. Fujita's Dragon came through for damage, and Slith Ascendant died on the spot to Lose Hope. Thanks to the Chromatic Sphere, Nakamura's Skyreach Manta came out as a menacing 5/5 creature. Fujita only had two mountains, so his Whelp would be unable to force a trade. He untapped, played Wand of the Elementals, and ended his turn. Nakamura attacked with this Manta and Golem, and the Golem traded with the Whelp. Nakamura played another Manta, this time as a 4/4. Fujita just laughed, and conceded.