Round 9: Kentaro Yuasa vs. Katsuhiro Mori 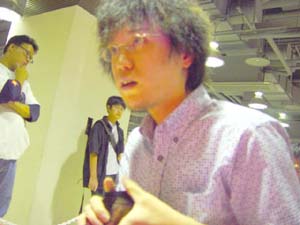 Katsuhiro "Silver Age Flash" Mori may have finally met his nemesis in fellow Worlds 2002 competitor Kentaro Yuasa. Where Mori's pace of play is blinding, Yuasa has an almost glacial deliberation of action. Will forcing Mori to take his time throw him off his game?

Yuasa kicked off with a Suntail Hawk. Mori played his single Sungrass Prairie and hoped for the best. Yuasa Speculated, fetching a pair of Analyses and Prismatic Strands. Mori didn't even need to knock his deck to be served up the land he needed to cast Wild Mongrel. Yuasa's rejoinder was to Analyze and play Tireless Tribe.

Mori ripped land again, sending in his Mongrel. Yuasa blocked with the Tribe. Mori exploded with a pair of Rootwallas and an Arrogant Wurm. Yuasa calmly pitched land and Envelop to save the Tribe. He untapped and busted out Divine Sacrament. He waited for Mori to make his move.

It was a blunder. He swung in with his Wurm. Yuasa double-blocked with Hawk and Tribe. Mori only assigned one point of damage to the Hawk, forgetting about the Sacrement. Yuasa pumped his Tribe with Glory. Mori shrugged off his error and made a Phantom Centaur. Yuasa came back with Beloved Chaplain.

Mori pitched a Glory of his own as well as a second Centaur to his Mongrel, turning it white, and swung with his whole team. Yuasa was forced to play the Strands. He fell to seven. He untapped and dropped a second Sacrement. Unfortunately, though he could pitch to threshold, his three creatures could only deal fifteen, and Mori was on eighteen. Instead he hoped Mori would screw up again. He failed to do so, activating Glory and swinging for the win. 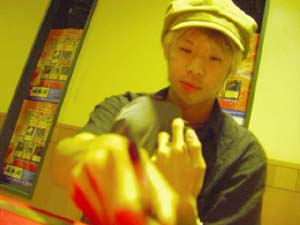 Yuasa opened Game 2 with a pair of Beloved Chaplains, blunting Mori's initial Rootwalla. They soon became a trio, and things were looking dire indeed for the former Rookie of the Year. He made a Phantom Centaur and handed it back. When Yuasa dropped Patrol Hound and not Divine Sacrament, a glimmer of hope flickered.

Mori tapped out for Arrogant Wurm, which could combine well with the Elephant Guide in his hand, punching damage past the Chaplains. Yuasa dropped Spurnmage Advocate. Mori drew a second Wurm, and swung in with the first, attempting to trade for the Patrol Hound. Instead he forced out Prismatic Strands. He replaced his Wurm.

Yuasa kept the pressure up with his Chaplains. Mori came down with a seventh land and Glory. After Yuasa's next attack he played Krosan Reclamation on the Prismatic Strands. Glory suited up with Elephant Guide and the team started swinging. Unfortunately, Mori misunderstood the way Spurnmage Advocate was played, thiking he could Reclaim the targetted cards and counter the effect. Had he Reclaimed before attacking, he would have been fine. Instead, he lost his Wurm. Rootwalla showed up and chumped Yuasa's Patrol Hound. Mori fell to eight.

Mori's Glory hit for six, reducing Yuasa to seven. Glory number two added to the airforce. The three Chaplains hit again, and Mori was at five. His whole team jumped Yuasa. The Spurnmage destroyed the Centaur and Strands stopped damage from the Glories. Yuasa returned fire and was caught by Moment's Peace. He was lucky to have Battle Screech back to make sure he'd be able to Strands again. Mori attacked again, forcing the Strands. Yuasa chumped only one of the Rootwallas, falling to one.

Yuasa couldn't even bring a lethal attack to the table because of the Peace in Mori's graveyard. Mori let himself fall to two. Yuasa flashed back the Screech and passed it back. Mori force him to chump the Glories and made an Arrogant Wurm. Moment's Peace ensured he'd survive to attack again.

On his final turn, he drew a second Moment's Peace, a safety net against possible shenanigans from Yuasa. Yuasa had no such shenanigans.