Round 9: The Last Command

Guillaume Wafo-Tapa is quite probably the best Constructed player on the planet. The last time he lost a match at a Pro Tour to someone not named Jon Finkel was Round 4 in Kuala Lumpur. Additionally, by some reasonable guesstimates, it’s possible that he’s approaching the highest Constructed ELO rating ever. The current holder of that title is Gabriel Nassif at 2318 way back at Kobe–2004. With Wafo-Tapa starting the event at 2156 and currently at 8-0 on the weekend, it’s entirely possible that he could eclipse Nassif’s record... if he keeps on winning. 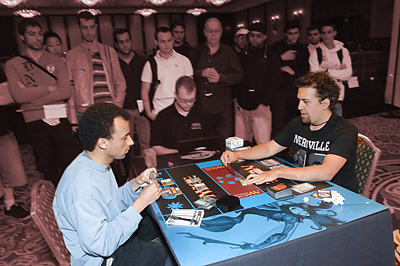 Guillaume Wafo-Tapa and Stan van der Velden both have records that look like Force of Savagery's stats.Standing in his way is the other 8-0 player on the weekend, long-time Belgian "semi-pro" Stan van der Velden. Where Wafo-Tapa is quite and thoughtful, van der Velden loves to play to the crowd. His chatter is generally amusing and inoffensive, and often somewhat self-derisive when he’s losing, but he has yet to do that this weekend. Unfortunately for him, he’s now facing his toughest test against a deck designed to beat his piloted by the hardest man to beat on the planet. Good luck, Stan!

Stan won the die roll and pumped the fist when Wafo-Tapa rolled a 1 to van der Velden’s 3. It’s the little victories that count. Both players kept their hands and they were off. Stan missed his usual Ancestral Vision opening, but did manage to plunk a Bitterblossom onto the table for turn two, while Wafo-Tapa played Wall of Roots followed by Kitchen Finks a turn later, which van der Velden let resolve in order to cast Scion of Oona on Wafo-Tapa’s end step. Guillaume merely passed his turn four and then cast Cloudthresher in Stan’s upkeep, which was countered by Spellstutter Sprite, a play Stan was clearly unhappy with. Firespout on Wafo-Tapa’s next turn showed exactly why, as van der Velden scooped his entire team into the bin.

The Finks beatdown began that same turn, with Stan’s life total going down by increments of 3 as he looked for a way out of the current predicament. Another Spellstutter Sprite countered Mulldrifter but dropped van der Velden to 6 from the Underground River ping. Finks swung in again, but this time Stan chumped and championed in a Mistbind Clique before damage resolved, The Clique made it onto the board just long enough to die to Slaughter Pact. A turn later Wafo-Tapa was shrugging and picking up his cards, conceding Game 1.

Was this a mistake from the great Wafo-Tapa? Rich Hagon, the #1 fan of Wafo-Tapa in the world and chairman of the Guillaume Wafo-Tapa Fan Club (he may have even written Wafo-Tapa’s theme song—think "Crazy Train" but not crazy and very French) would be appalled. 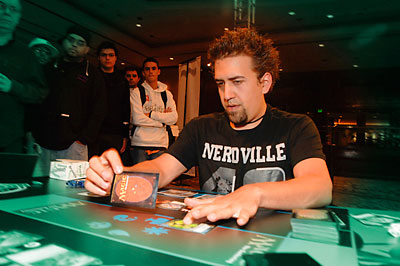 In reality, Guillaume felt that he would simply lose if the Clique resolved, so with Careful Consideration in hand, he decided to take the risk that he would not draw any black mana sources the next turn in order to give himself a chance to win the game. He didn’t find what he needed from Consideration and his next draw and lost, but he said he probably would have lost the other way as well, so it was better to take the chance.

While shuffling for Game 2, van der Velden admitted, "I was thinking for a half hour last night about how to sideboard for this matchup and I still don’t know. You know, with all the cards I have seen you play, if I add them up, there’s like a hundred cards in your deck."

Wafo-Tapa kept his opening hand in Game 2, but van der Velden had to Paris, and then thought seriously about whether to keep a one-lander with Ancestral Vision and Bitterblossom. He almost put his hand back and then said, "I’ll keep."

Meanwhile, Wafo-Tapa kept a two-lander with a pair of Reflecting Pools, leading to his first play on turn three when he finally found a land to give him colored mana to play Wall of Roots. Stan stayed stuck on an Island and Mutavault for two turns, which let Guillaume play Kitchen Finks despite a slow start. The Vision filled Stan’s hand with gas and gave him the land he needed, letting him suspend a second Vision and play Bitterblossom before forcing him to discard a second Blossom at the end of his turn.

Cloudthresher from Guillaume wiped away the lonely faerie token on Stan’s board and gave him a fat beater to go along with the Finks, but Terror made sure it didn’t get a hit in. Van der Velden was still mana-screwed, playing Faerie Conclave as his fourth land and again failing to play a land a turn later before simply passing the turn. The next turn. Van der Velden lost a Cryptic Command war over Makeshift Mannequin and scooped his cards, knowing that he was not going to overcome Wafo-Tapa this game.

Every opening hand thus far had been an agonizing decision for the Belgian, and this one proved no different. He eventually chose to keep a four-lander with the Vision opening, plucking BItterblossom off the top for his turn-two play.

"What a master!" came the shout from the crowd. 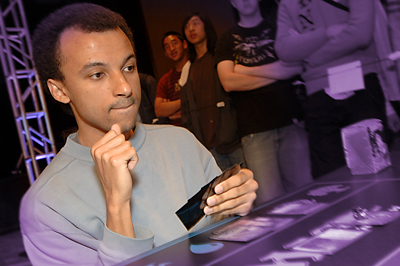 Wafo-Tapa’s commanding presence is hard to overcome. While van der Velden was playing the crowd, Wafo-Tapa was dropping Walls on his board to accelerate his mana, as Ancestral Vision ticked away, each turn one step closer to possibly giving Stan an overwhelming advantage. Play was very cagey during these turns, and when Vision finally hit the stack, Wafo-Tapa threw Cryptic Command at it, giving van der Velden a few moments of pause. He eventually chose to allow it to counter the card drawer despite two counterspells in his hand, presumably because he knew he’d need them for Wafo-Tapa’s real spells and because he already had three Faeries on the board. Mistbind Clique at the end of Guillaume’s turn (with only one mana open for Stan) was a big gambit that failed, but it drew a second Command out of Guillaume’s hand and nearly tapped him out.

Thoughtseize from van der Velden took Cloudthresher away and revealed two more counters (Command and Rune Snag) to go along with a pair of lands for the French master. Cryptic Command during Stan’s next upkeep (there were now five Faeries on the board) tapped all of Stan’s men and gave Guillaume yet another card in hand, and this one turned out to be a doozy. Stan went for Scion of Oona at the end of his turn, and Guillaume leapt into action, playing the Makeshift Mannequin he had drawn off the top to bring Cloudthresher into play and wipe out Stan’s entire army. Another Scion a turn later let Stan quickly rebuild.

A Faerie chump on Cloudthresher and an attempt at another Mistbind Clique from Stan ran into yet another Cryptic Command from Guillaume, and left Stan shaking his head and cursing in Dutch. Kitchen Finks resolved behind that, showing that Guillaume was plucking like gold off of each Command draw, and bringing the game and match that much closer to the end. With van der Velden forced to continually chump the Thresher and his life slowly eroding to the Blossom, Stan was now fully on the defensive, though Scion of Oona did steal away a point of Guillaume’s life a turn. With Rune Snags and Spellstutter Sprites no longer relevant due to plentiful mana, the game was basically over—the only question was whether Guillaume’s creatures would finish it or whether Stan’s Bitterblossom would. In the end, the creatures killed Stan a turn before the Blossom would, and the French master was now the only undefeated player in the tournament.

It took all four Cryptic Commands and a bunch of timely rips off the top of his deck for Wafo-Tapa to win that match, again proving that to ascend to the top of the Magic world it pays to be very lucky as well as very, very good.