Round 9: Looking for the Sweep 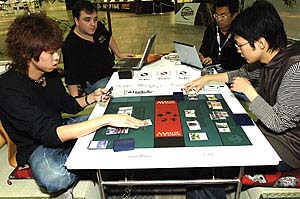 Two of Japan's best were battling it out for draft supremacy.

winner of this match between two of Japan's best young players would receive the honor of sweeping the top draft table and go 3-0 to start Day Two. On top of that, Tomohiro was looking to go 9-0 overall. Katsuhiro had picked up one loss Wednesday and was looking to avoid dropping his second game.

Kaji's deck was a green-black dredgeathon touching white for Faith's Fetters. Mori was playing a Dimir deck that had all the cards you could want in a mill deck except for the Vedalken Entrancer. Instead Mori had to rely on Duskmantle, Induce Paranoia, and Psychic Drain. Katsumori put the match up somewhere between 60/40 and 70/30 in his favor, although he was not taking into account Kaji's maindeck Junktroller.

Kaji got his Nullmage beats in and summoned his deck's secret weapon - Stinkweed Imp. Mori who had just been passing the turn and Duskmantling reached six mana and used Vedalken Dismisser on the Nullmage. Kaji played Junktroller - basically the equivalent of lifegain in this matchup.

Mori had no play and he bided his time for Kaji to replay the Shepherd. When Mori used Duskmantle Kaji activated the Searchlight. Mori used the mana to help pay for Peel from Reality on both the Dismisser and the Shepherd. Kaji used his Junktroller on a milled Golgari Rotwurm at the end of Mori's turn and shuffled it up with Farseek. Meanwhile he was pecking away with his Stinkweed and Searchlight whenever possible.

Tidewater Minion from Mori meant he would have multiple opportunities to use the Duskmantle and a quasi-mana sink for the Searchlight - assuming he had at least one more blue or black source available he could untap his Duskmantle and activate it.

Mori had a mill deck without the traditional millstone on wheels - Vedalken Entrancer - and his Duskmantle had to do twice the work it would normally do (between the Junktroller and all the Dismisser/Peel from reality tricks in Mori's deck). Kaji was putting cards on the bottom of his library while Mori was putting them on top. In the meantime, Mori was being nibbled to death by the Stinkweed while Kaji continued to "gain life" with the Junktroller.

"Annoying," laughed Mori as Kaji kept the game moving at a glacial pace thanks to his wall. When Kaji tried to kill the seemingly immortal Dismisser with Keening Banshee, Mori had another Peel and picked up his Dismisser and Kaji took back his Junktroller. Kaji attempted to sneak a point in with the Searchlight but Mori used it to pay for Last Gasp on the flier. 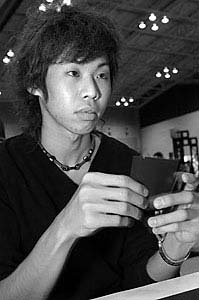 Mori and Kaji played with so much bounce that we actually moved back into the 1950s.

Primordial Sage came down ahead of Junktroller. Mori wanted to hold his Induce Paranoia for the wall but counted his opponent's library and decided to counter the six-mana card-drawing monster. Mori sent in his Augermage and Kaji traded his Turnkey for it. Galvanic Arc tried to shoot down the Stinkweed but Kaji had Gather Courage.

Stinkweed took Mori to 5. Junktroller returned for more action. Mori opted to Dismisser the flier and mill it away. Kaji tried using his Searchlight but Mori untapped his Duskmantle and milled him again. Kaji milled himself to the tune of five when he dredged back Stinkweed Imp - it seemed like the only way his deck could win.

Mori was at 5 while Kaji had less than 10 cards remaining in his library - although he did still have "lifegain" in the form of the Junktroller. Mori took the Imp out of the equation with Clinging Darkness but Kaji played his Nullmage Shepherd.

Mori transmuted Drift of Phantasms for Galvanic Arc No. 2 and used it to kill the flier. That was enough for Kaji, who finally scooped.

Kaji's opening Shambling Shell was killed with Clinging Darkness. He followed up with the dreaded Junktroller and a turn later he also had Stinkweed Imp. Kaji showed no fear and dredged back the Shambling Shell but only attacked for one.

Dismisser targeted Shambling Shell and Kaji allowed it to go on top - any additional cards on top of his deck had to be good for his side of the table. He promptly ducked any Peel shenanigans by hitting the Dismisser with Keening Banshee. Mori had a second Dismisser at the ready and bounced the Junktroller.

Mori kept the Keening Banshee at bay with Belltower Sphinx but had to take one from Stinkweed. He quickly found himself at 14. Galvanic Arc enchanting the Sphinx and took down the Stinkweed but Kaji had his Junktroller going and dredged with impunity.

Mori had a plan though and Peeled his Dismisser and the Junktroller. He untapped and played Sadistic Augermage. He blocked Keening Banshee but when Kaji had Gather Courage, his dream of ever countering the Junktroller was destroyed and he had to Induce Paranoia on the mini-Giant Growth. Kaji replayed the Junktroller for what seemed like 12th time in the game. Mori paid 8 life for four cards thanks to Moonlit Bargain during his mainphase. 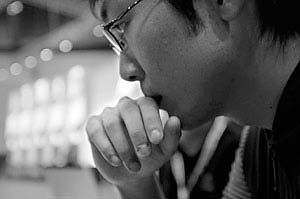 Kaji got a lot of mileage out of Junktroller.

When Mori attacked with his Sadistic Augermage, Kaji blocked with his Junktroller. Mori beamed and finally - actually - was able to kill the wall with his second Galvanic Arc. Kaji had been dredging very aggressively and just scooped at that point - not even waiting for the Psychic Drain that Mori had looming in the wings.

"I thought he only had one Galvanic Arc," explained Kaji after the match. Kaji only saw two of them in the draft but there had actually been at least six at their table.