I had the fortune of watching both these players draft (they sat next to each other) and discuss (afterward they sat next to one another and talked about the draft). Both Paulo Vitor Damo da Rosa and Luis Scott-Vargas have built strong red-based decks, although they were cutting each other from the color, and they both have power. Damo da Rosa has the Thopter Foundry and a Treasure Mage to find it, but Scott-Vargas has undeniable synergy with his first-pick Spine of Ish Sah, second-pick Kuldotha Firefiend, and then every other sacrificially based artifact that followed it. Glimmerpoint Stag and Razor Hippogriff among others, worked with many things—including Necrogen Censer and Ichor Wellspring.

Before the match, a gaggle of pros were discussing pick orders and how much it will change once people other catch onto Ichor Wellspring. Pat Chapin said he’ll take them over Burn the Impure; Ben Stark laughed and called him crazy, but they all confirmed the choice is not that far off. The Wellsprings will certainly give an inevitable edge to LSV’s deck in the match-up.

Paulo’s red-blue started with Gust-Skimmer getting in for 4, and Flight Spellbomb (sacrificed to find a third land). Luis was content with an Ichor Wellspring, Strider Harness and Rusted Slasher (another overtly synergized card for the American). Blade-Tribe Berserkers and Lumengrid Drake were Paulo’s answers and the score was quickly 20-14 in the Brazilian’s favor, however a Tumble Magnet stunted further progress.

Rusted Slasher cycled the Ichor Wellspring from play, then picked up the Harness and got in there. Paulo pondered whether the Gust-Skimmer, Berserkers or his new Saberclaw Golem should jump in the way. None of them did, and the scores went to 15-14, with a Liquimetal Coating and Rusted Relic postcombat.

Saberclaw took a magnet tumble next attack, and Paulo swung with the rest (using his newly cast Panic Spellbomb) sinking Luis to 7. Paulo kept mana open for his Stoic Rebuttal, though he still had gas in the form of Kuldotha Ringleader, Wall of Tanglecord, and the dreaded Thopter Assembly. 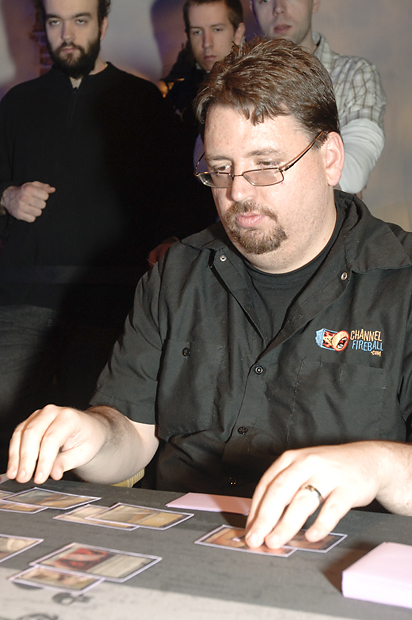 Luis Scott-Vargas battles while a crowd of onlookers, well, looks on.

He allowed Luis’s Sylvok Lifestaff to come down, equip to the Slasher, then attack (it was 9-7). Soon the Magnet finished its tumbling on the flyer from Lumengrid. Paulo had exactly 6 land for the Thopter, and pondered the right play—to cast the ridiculously fun, awesome bomb, or hold up mana. It was to cast the ridiculous flyer; now it was Luis’ turn to ponder. Glint Hawk bounced the Tumble Magnet while the Slasher red-zoned again. Liquimetal Coating allowed Luis to sacrifice a Plains to regenerate when Paulo blocked, and a timely Turn to Slag took out the Thopter-producing threat before it had produced any Thopters.

How could Paulo squeak in the last damage? Another Panic Spellbomb cycled and turned the Glint Hawk (equipped with the Lifestaff) panicking. He cast Wall of Tanglecord with counterspell mana up and silently passed the turn back.

The lights were hot. The players sat silently, motionless, not making eye contact for seemingly minutes before Luis offered his Hawk to trade with the Drake; Paulo graciously accepted. But he did not accept the re-cast Tumble Magnet thanks to Stoic Rebuttal. Paulo cast Sky-Eel School cycling away his endless stream of Islands. After Luis’ next attack, it was 3-8 in his favor, and Luis dropped the game-changing Necrogen Censer that threatened to quickly end the game if Paulo couldn’t end it first.

He bounced Luis’ last remaining regenerating creature with a Steel Sabotage, but though it was close, it wasn’t enough and the Censer took the game.

Dueling Spellbombs (Flight and Origin) started the game, and a Wall of Tanglecord, Iron Myr but no third land came next from Paulo. LSV performed his Sylvok Lifestaff / Strider Harness opening, then returned Origin Spellbomb with a Razor Hippogriff. Paulo found land three for Blade-Tribe Berserkers (Metalcrafted), and took down the Myr token.

“It’ll be back,” LSV said as he tucked the token into his pocket. 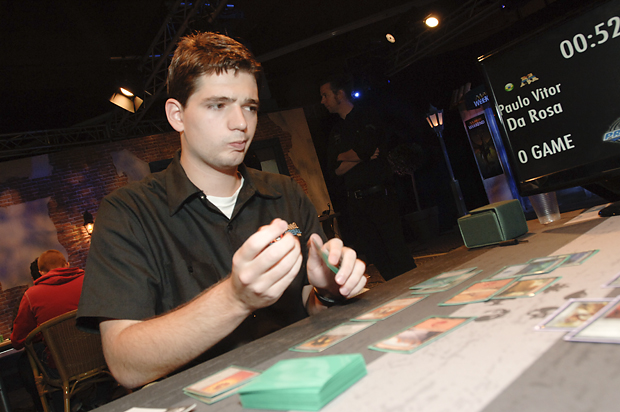 Paulo Vitor Damo da Rosa has a bad feeling about this.

His prophecy rang true, while the double-suited Hippogriff bled Paulo’s life total. After a Peace Strider (equipped with Lifestaff) chumped another of Paulo’s creatures, the score was 12-27 in Luis’ favor. Paulo used Treasure Mage to find the Thopter Assembly, but lacked the mana to cast it. Glint Hawk / Mox Opal shenanigans saved some mana for Luis, and his Hawk ended its inaugural turn with both equipment on its back.
Paulo finally cycled his Spellbomb and found the land he needed, but wondered if it was enough. Lots of flyers for LSV meant PV would still be on the back foot, and if Luis had the Turn to Slag like last game, it would be the nail in the coffin.

Paulo decided it worth the risk, but Luis indeed had the Slaggy answer. The next attack sunk our Brazilian Pro Tour champion to 5, and although his Neurok Replica next turn slowed the process, it wasn’t close to enough.