Those of you with long memories will remember Lucien Bui who made top 8 in PT LA 1999, the Urza's Saga draft Pro tour; He hasn't done much recently though, and his opponent is not known internationally. Both players were on 18 points probably needing three more wins for Top 8. 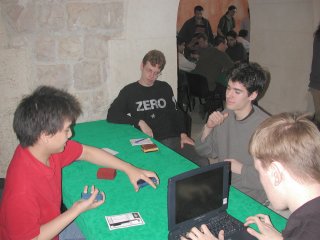 Bertrand was playing Fires and got a quick start, with a Bird of Paradise allowing him to play a second turn Chimeric Idol and one on the third turn as well. Lucien played a Chimeric Idol of his own, but when he attempted to trade the artifact creatures, Guillamin had a Wax/Wane. Bertrand then played a Blastoderm, and suddenly Lucien was on thirteen life staring at two Idols and a Blastoderm.

He played a Meddling Mage but chose not to block, and Bertrand had a second Wax to take the first game in five turns.

Lucien played first and got a decent draw with a first turn Ramosian Sergeant. Bertrand played a Bird, then Fires of Yavimaya, but Bui had three Counterspells for the third turn Blastoderm, the fourth turn Saproling Burst, and the fifth turn Two-Headed Dragon attempted by Guillaumin.

This bought him the time to start searching for Rebels, and by the time he had to let Bertrand play a Thornscape Battlemage as he was out of Counterspells, he had a Lin Sivvi and a Defiant Falcon in play as well. The Battlemage didn't get chance to deal damage, as Lucien found Cho-Arrim Revolutionary with the Sivvi, and blocked.

This left Bertrand with effectively nothing in play, as Bui continued to search for Rebels and began to attack himself with Steadfast Guards and a Ramosian Sky Captain. There was nothing Guillaumin could do and the players moved on to the third game.

Bertrand thought for a long time before deciding to keep a rather slow draw with Flametongue Kavu as it's only creature, but Lucien had to take a mulligan.

Fires of Yavimaya came into play on the third turn for Bertrand, and Lucien played a Meddling Mage but for some reason named Thornscape Battlemage rather than Flametongue, and regretted it immediately as the Kavu killed his Mage and attacked for four.

Lucien had no other creatures in his hand and was already in serious trouble as the Kavu brought him to eleven before he found a Parallax Wave to hold off the beats. Bertrand had a Wax/Wane in hand but this would mean that his Flametongue killed itself, so Guillaumin waited in case Lucien played a creature of his own. Bui was struggling because of his four Adarkar Wastes in play meaning that he was taking a lot of damage every time he played a spell.

Meanwhile Bertrand's Tahngarth, Talruum Hero was countered, leaving him to try and beat down with a Llanowar Elf. Bui was out of Counterspells and had to use Parallax Wave to take a Two-Headed Dragon as well, but this put the Wave down to no counters, and Bertrand ended the game next turn by killing his own Elf with Flametongue Kavu, attacking and sacrificing Fires of Yavimaya.