Round 9: Masashiro Kuroda vs. Kotarou Ootsuka

Kuroda and Ootsuka finished up yesterday in first and second place- Kuroda went undefeated, while Ootsuka was 5-0-1. Today they’ve each gone 1-1, and a win here would go a long way towards making Top 8. Ootsuka made the Top 8 of this tournament last year, but failed to make the team. Without a doubt, he’d like to come back to Sunday, but this time earn the right to represent his country in Berlin. 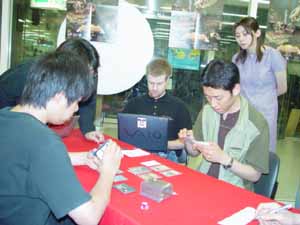 Kuroda summoned a first turn Weathered Wayfarer, followed by Daru Spiritualist on turn two. As is expected, he had a third turn morph to continue the curve, while Ootsuka played his first creature on turn three- Death’s-Head Buzzard. The flier was just what Ootsuka needed, as it could wipe out Kuroda’s Daru Spiritualist and Wayfarer if it headed to the graveyard. Kuroda wasn’t eager to attack into it, and built up his side with a morph and Vile Deacon, while Ootsuka had a morph and Screeching Buzzard. Now that the game had slowed down a bit, Kuroda started to gain card advantage with Weathered Wayfarer, searching out a cycling land and using it to draw a card. Screeching Buzzard attacked for two damage through the air, and Ootsuka summoned Carrion Feeder. With the sacrifice ability and Death’s-Head Buzzard, Ootsuka now had a –1/-1 across the board whenever he wanted it.

Kuroda unmorphed Daru Sanctifier to get a 1/4 body and another Cleric in play, then put Dragon Scales on Vile Deacon and sent it into the Red Zone, along with a morph creature and the Sanctifier. Ootsuka sacrified Deaths-Head Buzzard to the Feeder, and played Caller of the Claw. This gave him two blockers for the creatures that weren’t Vile Deacon, and Kuroda’s morph died (Cabal Executioner) along with Ootsuka’s bear token, while the Deacon got through for damage. With the help of Naturalize, however, the Deacon soon fell in combat, and Ootsuka’s Feeder was already up to 4/4. It started to attack along with the Buzzard, and Kuroda stabilized the ground with Twisted Abomination. Unfortunately, he forgot about putting Dragon Scales on it from the graveyard, and was visibly upset by this mistake.

Ootsuka’s Tusker gave him more threats on the ground, keeping it at a stalemate while the Buzzard pecked at Kuroda’s life total two damage at a time. However, Clutch of Undeath killed Ootsuka’s morph (Skinthinner) while Pacifism nullified the Buzzard, and Kuroda began to take control of the game, summoning Dive Bomber. Ootsuka had Nantuko Husk, but it was going to be very difficult to get by Kuroda’s Abomination. Ootsuka used Reaping the Graves to get back Skinthinner, but opted to use it to kill Kuroda’s morph (Daru Healer) instead of the Dive Bomber. He had a plan, as he untapped and played Decree of Savagery to make his team bigger. They all attacked, and Kuroda unmorphed Skinthinner to kill the Tusker. The resulting combat left Ootsuka with a large Husk and Feeder, and that was good enough to smash through the Abomination to take the first game.

Kuroda actually slapped himself across the face after the game was over, and was likely still upset over forgetting to put Dragon Scales on his Twisted Abomination. Needless to say, that would have made the game much different, and he probably would have won.

Kuroda mulliganed his opening hand. Ootsuka opened with Carrion Feeder, and both players had morphs. Symbiotic Elf made Carrion Feeder a 4/4, and it killed a morph in combat (Daru Sanctifier). Lingering Death went on the Feeder, which attacked along with

a morph to deal six to Kuroda. Ootsuka then used Naturalize to kill the enchantment, and Kuroda shook his head as he saw the game’s tempo slipping away. He untapped, played a morph creature and ended his turn. Ootsuka flipped over Skinthinner to kill the morph (it turned out to be Skinthinner), and attacked for another six points of damage. Kuroda couldn’t come back from this position.