Round 9: Masayuki Higashino vs. Olivier Ruel 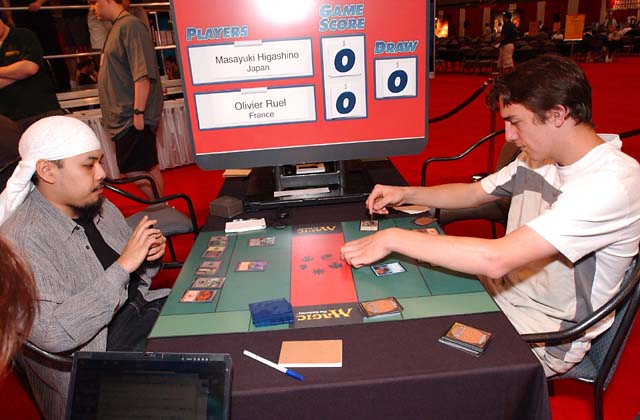 This match was another installment in what Mark Rosewater calls "the unspoken rivalry between Japan and France". Higashino is one of Japan's best players. He was the Japanese National champion in 1999, and recently won Grand Prix-Hiroshima. Ruel is one of France's best players, placing second at Grand Prix-Valencia, in addition to another second place finish at Grand Prix-Porto

Higashino went first, and mulliganed his opening hand. Ruel summoned Reef Shaman on turn one, and played Samite Pilgrim on turn two. Higashino played his third swamp, suggesting that he might be color screwed. The Pilgrim went into beatdown mode, and was joined by Samite Elder. Higashino played a mountain, and Urborg Skeleton with kicker. Ruel attacked with the Elder in a joking manner, and Higashino blocked it with Urborg Skeleton. This was definitely not the most exciting combat phase ever seen. Aurora Griffin also came out, giving Ruel a damage clock in the air.

Pernicious Deed was then cast by Higashino, which gave him a tremendous advantage. Ruel already had four creatures on the table, while Higashino had only one- but the Skeleton could survive the Deed. Ruel attacked for a few points, and played nothing else. At this point, Higashino needed to decide when to blow up the world. He could wait, which would cause Ruel to stop playing cards in fear of overextending. However, the longer he waited, the more damage he took. Plus, Higashino probably wasn't eager to play more creatures with a Skeleton on the board. 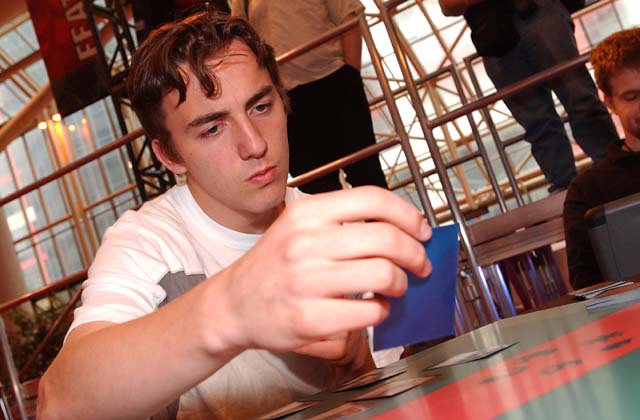 Olivier Ruel After a few attacks from the Griffin, he used the Deed on end step to wipe away the board, and regenerated his Skeleton. He then summoned Kavu Monarch, which fell to Tribal Flames. The Skeleton attacked a few times, until Ruel dropped Treva, the Renewer. Higashino tried to Terminate it on end step, but Ruel had Confound. A somewhat unimpressive Bloodfire Dwarf was summoned by Higashino, while Ruel played Minotaur Illusionist. Treva continued to attack overhead, and Higashino had no answer to it.

Ruel cast Samite Pilgrim on turn two, while Higashino once again played three straight swamps. Mountain was played on turn four, but Higashino still had no nonland permanents in play. Things weren't looking much better for Ruel, who went passed turn four and only had a Samite Pilgrim to show for it. Higashino played his first creature of the game, Phyrexian Bloodstock, on turn five. Not to be outdone, Ruel summoned Minotaur Illusionist. Phyrexian Gargantua was played by Higashino on turn six, netting him some card advantage.

Silver Drake was cast by Ruel, bouncing back Samite Pilgrim. He chose not to recast it, and instead left mana untapped to play either Confound or Ertai's Trickery. Sure enough, Higashino played Hypnotic Cloud with kicker, and Ruel countered it. Silver Drake then went to the air for three damage, while Samite Pilgrim was replayed. Higashino now summoned Callous Giant, causing a slight cringe to appear on Ruel's face. 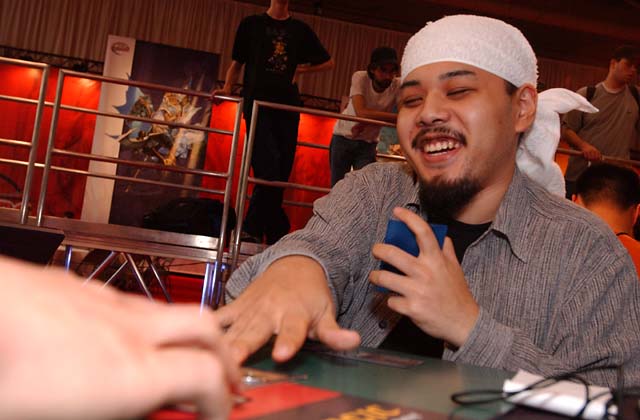 Masayuki Higashino Ruel continued to lock down the ground with Lashknife Barrier, while Silver Drake entered the Red Zone once again. Higashino tried to kill it with Terminate, but Ruel had Confound. Deed hit the table on Higashino's turn, but Ruel had been expecting it, holding back creatures in hand. It still wasn't the best thing that could have happened, because the Deed was used immediately to wipe out everything on the table but Higashino's Giant and Gargantua. Both 4/4 monsters attacked through the vacant battlefield, dealing eight damage.

Even though he was on the ropes, Higashino bounced back well. He played Manacles of Decay on the Giant, and then summoned Goblin Legionnaires and Razorfin Hunter. The Gargantua attacked, and traded with the Legionnaires thanks to damage on the stack tricks. Higashino then played Ancient Kavu and Stone Kavu, while Ruel played Aurora Griffin and Firebrand Ranger.

At this point, Higashino's two creatures were bigger than Ruel's, but at least one would die in combat due to the Hunter. This would mean that three damage could get through, but at the expense of trading a big creature for a smaller one. After some thought, Higashino attacked with only the Ancient Kavu. It traded with Firebrand Ranger, with the help of Razorfin Hunter. Ruel then swung with Aurora Griffin, and played Reef Shaman. Higashino summoned Bloodfire Dwarf, and sacrificed it to take out Ruel's Hunted. This was followed by Thunderscape Familiar, and Stone Kavu attacking for three.