Round 9: Masayuki Higashino vs. Osamu Fujita 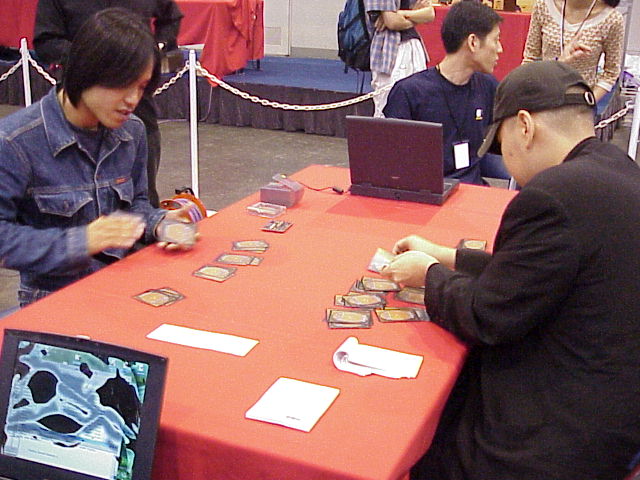 Looking at these two combatants, it seemed as if they had dressed with the intention of facing each other in the Feature Match area. Masayuki Higashino, Champion of Grand Prix - Hiroshima, dressed in his trademark all-black outfit, complete with blazer and black mana symbol T-Shirt. Osamu Fujita, best known as a member of new Japanese powerhouse Anchans, was clad in denim, head to toe.

Fujita scored himself a white-red deck, heavy with what good burn exists in Odyssey, as well as a bunch of Barbarian Lunatics to run double-duty. Higashino has a fast red-green deck.

Higashino thought hard before choosing to keep a hand of green cards, Patchwork Gnomes and mountains. Fujita came down with a turn-two Mystic Visionary, but Higashino's Gnomes made it stay at home. Fujita added a Lunatic and passed the turn. Higashino's deck was kind, offering up the forest he lacked. His Chatter of the Squirrel held off Fujita's low-toughness army. His Gnomes started swinging.

Fujita lay in wait, playing out Hallowed Healer. Higashino hit again and made a second Squirrel. With the Healer online, Fujita was happy to swing with Visionary and Lunatic. The squirrels and Visionary went to the graveyard. Fujita showed no sign of slowing down, playing Dwarven Strike Force. 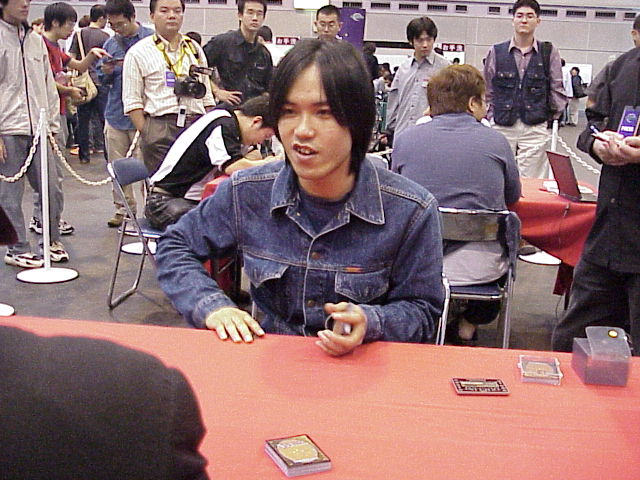 Higashino was now on the defensive. He made a Wild Mongrel and held back. Fujita reinforced that idea with Savage Firecat. 7/7 was a little more than Higashino could handle. He added a Lithatog to his team, and soaked seven damage. An end-of-turn Blazing Salvo on the Healer did five to Fujita, knocking him to eleven.

And then the most amazing thing happened.

With the game seemingly slipping away from him, Higashino cast Reckless Charge on his Mongrel. Then he discarded two cards to it. Then he tapped three mana, and sacrificed the lands to his Lithatog. Now he had exactly seven cards in his graveyard, and played Demoralize. Sacrificing the rest of his land, he attacked with a 7/4 Mongrel, a 6/7 Lithatog, and Patchwork Gnomes.

Even if Fujita blew up the Gnomes with his Lunatic and prevented damage with his Healer, he would still take eleven damage, just enough to finish him. He triple-checked his hand for Embolden, then packed up his cards.

Still reeling from the surprise loss, Fujita mulliganed in game two, then kept his mediocre six-card hand. Higashino also went for seconds, but his was gangbusters. He had Druid Lyrist to start the beatdown, Engulfing Flames for Fujita's Barbarian Lunatic, and then Patchwork Gnomes to keep the hits coming. Fujita's next play was a woefully inadequate Ember Beast. 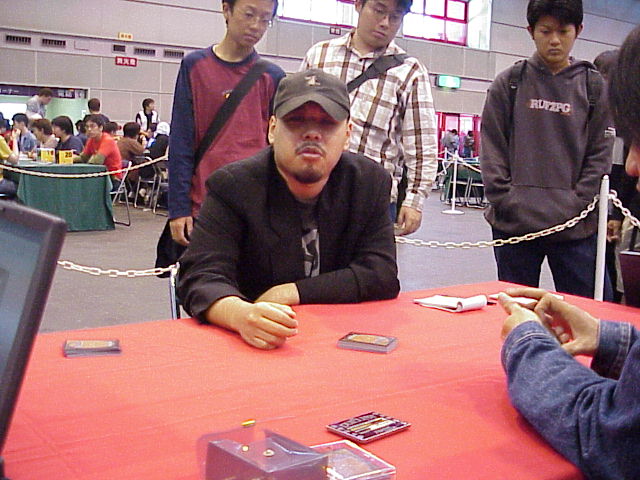 Higashino showed no mercy. Down came Barbarian Lunatic, and when Fujita had no further play, he swarmed the Red Zone. Fujita's Blazing Salvo played Lava Axe, doing nothing to protect him. When Fujita finally found a plains to cast Mystic Visionary, readying the Ember Beast for defense, Higashino's deck was all to happy to offer up the fourth land necessary to bring back Engulfing Flames for an encore.

At five, Fujita struggled against the tide of damage. His second Lunatic looked like it would do the trick. Higashino played Demoralize, pushing through three more damage, then showed Fujita Firebolt for the win.