Round 9: Masters at Work

than 24 hours ago, I was saying that if all I ever did were eat, sleep, and cover Eugene Harvey in feature matches, my life would be complete. My dream has now come true.

At 7-1 he is now facing Japanese superstar Masashi Oiso, who has a Top 8 in Columbus from this season and recently took the Grand Prix-Boston title out from under the Americans. And Saturday, his deck is quite ridiculous. A Shuriken with a couple of ninjas, a Jitte, Undying Flames, Honden of Seeing Winds, and plenty of burn as well.

They presented their decks and the judges swooped in for a deck check. During the wait, photographer Craig Gibson attempted to entice Eugene into posing for some photos, but he would have none of it. "Give me like two hours, I need to wake up." 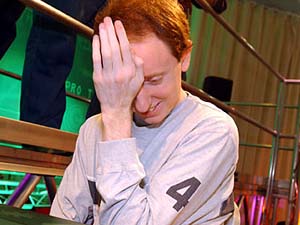 Eugene is not ready for his close-up.

Fourteen minutes later, the game was under way. Well, was until Eugene needed to mulligan. A couple more minutes of shuffling later, I blinked, and Oiso already had a tapped Ninja of the Deep Hours that had hit off of an Akki Avalanchers. Eugene just had turn-three Kodama's Reach, not the best play when facing down Ophidian Ninja. Oiso just hit, drew a card, and added Soratami Rainshaper.

Eugene played a fifth land and Okina Nightwatch, but it was quickly back in his hand due to a Mistblade Shinobi. Oiso then added Descendant of Soramaro and took four from the replayed Nightwatch. His Shinobi then threw a Shuriken at Eugene's Kitsune Blademaster. Nightwatch rumbled in again and was double-blocked by Akki Avalanchers and Descendant of Soramaro, but it found some Inner Calm, Outer Strength to stay alive.

Rainshaper continued to flit across for two at a time while Eugene deployed more ground forces and tried to get through. Kiri-Onna attempted to put a damper on that plan by bouncing the Nightwatch, and Eugene lapsed into thoughts, considering whether or not to counter the ability by sacrificing his Moonlit Strider. Eventually he did.

He had two more attacks but was only to push through six damage, taking Oiso to 10, before another Rainshaper attack and a Spiraling Embers ended it in favor of the young Japanese.

Between games, Eugene took out Roar of Jukai and Stampeding Serow, and brought in Mending Hands and Rending Vines. Oiso made no changes, confident in his maindeck. 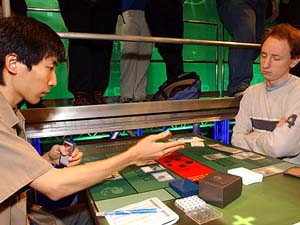 Masashi's Onslaught could not be stopped.

Eugene had a turn-one O-Naginata, a very powerful card in a green deck, then followed it with Petalmane Baku and Humble Budoka. Oiso developed with Akki Avalanchers and Brutal Deceiver. The Budoka and the Deceiver traded and Briarknit Kami found its way from Eugene's hand to the table.

Oiso, who had hardcast Mistblade Shinobi the turn before, commanded it to pick up a Shuriken and murder the Petalmane Baku, keeping Eugene off of his white mana (he had five forests). He then snuck in a Ninja of the Deep Hours off of his Avalanchers and then set back Eugene with Kiri-Onna. When he took down Briarknit Kami with a flurry of Shuriken from his two ninjas, Eugene had had more than enough and gave up. His white-green deck was hard pressed to deal with this kind of onslaught.