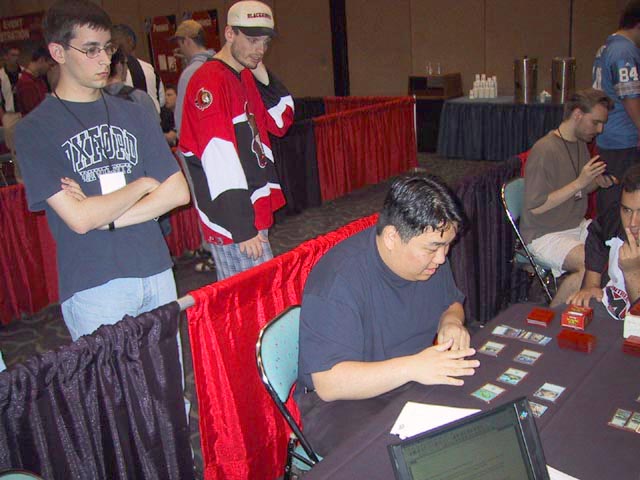 This is the third time this tournament that Tsang and Vienneau have faced off, with Tsang being Vienneau's only two match losses in the draft portion of Canadian Nationals.

The game opened on turn 3, with Terry failing to bring out a Rishadan Airship. One of the major problems that Skies has versus control decks packing targeted elimination is that often the Skies deck won't get out any kind of significant threat through the countermagic and elimination. While normally decks that pack Countermagic and quick beats are able to make short work of control decks, the combination of targeted elim plus counterspells is often too much for Skies. Terry's deck overcomes part of this by running Rootwater Thief, a large threat against a deck like Matt's, which only includes a few finishers.

On the fifth turn, Terry cast Gush, a Troublesome Spirit, and Foiled Matt's attempt to counter the Spirit. With a clock on the table, Skies can be a very vicious threat indeed to a control deck. Matt's targeted elimination was only an Urza's Rage, and he lacked a counterspell for the second Troublesome that Terry tried to put on the board. He started to dig into his deck with Fact or Fiction, looking for Tsabo's Decree or Void to answer the pair of fliers, but he didn't have much time - the Spirits provided a very quick 3 turn clock. Vienneau found his Decree, but lacked any counterbackup to keep the spell from being stopped by Terry. Putting it all on the line, he cast the Decree anyway, removing the two Spirits, but leaving a lone newly summoned Rootwater Thief online.

In the next turn, the Thief stole a Nether Spirit from Vienneau's deck. With only two Spirits in the deck, this may have been an error - most Nether Spirit decks run 3 Spirits, and with two remaining, this should be a signal for one in Vienneau's hand. He followed up the theft with a Spiketail Hatchling, and had that as his lone clock after an Urza's Rage destroyed the Rootwater Thief. 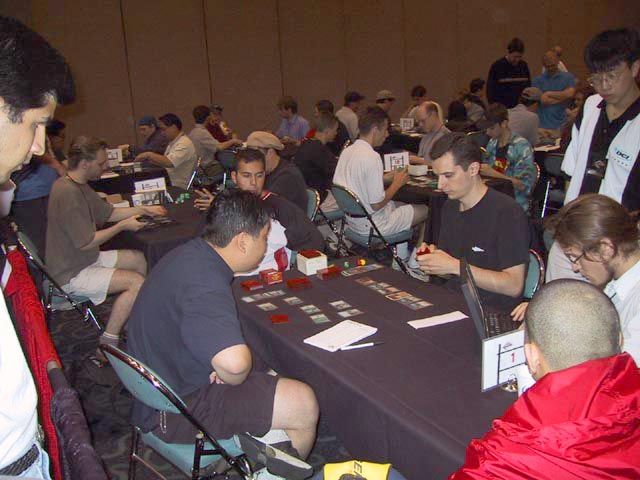 Matt dropped the Nether Spirit in hand, leaving a hand full of land and a newly drawn Urza's Rage. At 6 life, the Spiketail Hatchling was still quite a threat, and looked for cards with yet more card drawing to get out of the situation. An Accumulated Knowledge brought him a Crosis's Charm and a Spite/Malice, effectively answering Terry's entire offense. Terry had a Thwart for the Charm on his new Waterfront Bouncer, and a Foil for the Spite. Now, with only an Island in hand, Tsang had an active Waterfront Bouncer and a Spiketail Hatchling against Vienneau's Nether Spirit and Urza's Rage in hand.

The Hatchling began its slow assault, while Terry accumulated cards in hand. Matt had reached the frightening 12 mana mark, signaling the ability to get two Urza's Rage for the kill, and Terry had dropped another card, able to kill Matt on the next turn. Matt's draw of Void on the next turn was well timed. Terry again had the Thwart, and with a mana in his pool was immune to the threat of Force Spike. The Force Spike did keep Terry from using the Waterfront Bounce for the kill on the next turn, but this was little solace to Matt, who was force to use his Urza's Rage immediately to buy more time. With no cards in hand, and only Islands in Terry's hand, things still looked bleak for Matt, and without a real answer, Matt scooped.

Matt brings in Gainsay and Juntu Stakes, while Terry brings in Static Orbs and Misdirection.

"I can't take Matt's pride, because someone else took that already," said Terry to spectator Gary Wise.

Matt nodded. "I put that on the line in a game that I lost."

Terry's first three threats (all Spiketail Hatchling) were again countered, but things still were not too excellent for Matt, who failed to drop a third land. He did finally drop a fourth land after Raging away a Rootwater Thief and then Malicing a second. This kind of point-answer play is difficult for a control deck to have to take. Terry was able to play a Gush, forcing Matt to chose between countering the Gush or Countering the threat. Matt chose to counter the threat, but the extra cards could prove costly in this matchup, especially since Matt sided out some card drawing. 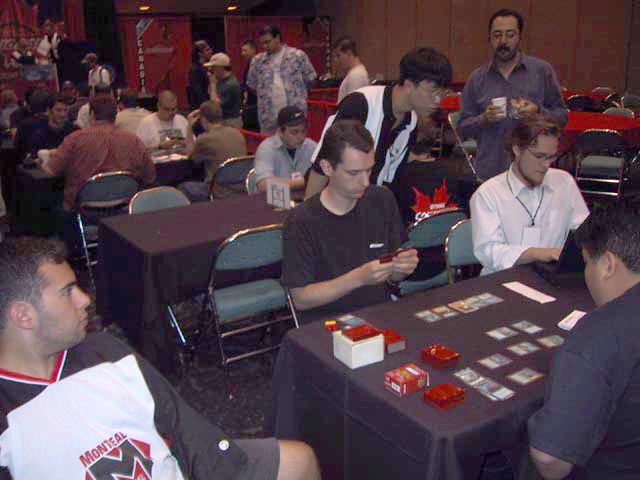 The first threat to finally hit play was a Waterfront Bouncer, but Terry still had 6 cards in hand when it hit play, while Matt's hand was strong with a Crosis's Charm, Void, Spite/Malice and Misdirection. The real problem with the Bouncer for Matt was the ability to stop yet more point elimination. Throwing this advantage to the wind, however, Terry pushed in with his Bouncer to start a clock on Matt. This opened an opportunity for Matt to Charm the newly summoned Rishadan Airship, and left Terry with a slow clock.

Terry tried to push Static Orb into play with a Thwart, but a second counter from Matt (Misdirection) forced a war leaving Matt with only a single card in hand, Void. The Foil from Terry won the war, though Terry was left with only a single Bouncer to continue the slow beatdown. A few turns later, Matt Tried for the Void he had in his hand, letting it resolve at 3, killing the Orb, and showing Terry's hand which included Troublesome Spirit and a pair of Foil. Now on a 3 turn clock, Matt need to find an answer, but only had countermagic available.

With Foils backing up any possible answer Vienneau might draw, Tsang didn't have to worry to much. An Accumulated Knowledge didn't bring Vienneau any closer to an answer, and he conceded with counters in hand.