Round 9: Matt Vienneau vs. Tom Swan

Tom Swan is from Landenberg, Pennsylvania - in the corner of Pennsylvania near both Delaware and Maryland. His son Brad has garnered more attention over the years, but father Tom has half a dozen Pro Tours of his own. Both he and Grand Prix Dallas champion Matt Vienneau went 8-0 on Day 1, landing them on table 1 first thing Sunday morning. 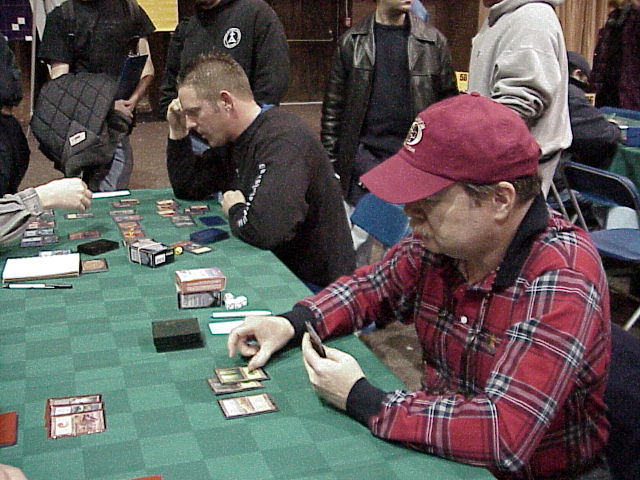 After Swan played first turn Stormscape Apprentice, Vienneau commented "So you're the green/white guy." Swan answered simply "Somebody had to be." He showed why he chose to be that guy by playing excellent cards on the next few turns: Thornscape Familiar and Lashknife Barrier. Vienneau's answer was to make him burn for one for tapping 3 mana when he played the Barrier (Swan forgot about the Familiar's effect - 2/1 for 2 seemed plenty good enough!). Vienneau then used Rushing River to bounce the Familiar, which he later Excluded. Tower Drake followed by Plague Spores on Stone Kavu swung the momentum in his favor until Swan answered back with Shackles and Yavimaya Barbarian. Swan couldn't help but smile when Vienneau played Plague Spores #2, taking out Swan's second (of two) Mountains. That left Swan with a hand of Tribal Flames, Fires of Yavimaya, Zap, and Rith, the Awakener, but no red mana. It looked like Swam had some time to draw into red since Vienneau's had no offense - Sunscape Apprentice plus Lashknife Barrier was enough to hold off all the 2/2's Vienneau could play. While Swan was hoping to draw Mountains, Vienneau was just hoping not to. His draw - 13 land and 9 spells - allowed Swan to mount an offense of random ground creatures plus two Sunscape Apprentices. Vienneau was remarkably calm about his bad draw. In stark contrast to long-time playtest partner Gary Krakower, who was visibly upset at his deck for the entire length of a round 8 feature match against Steve OMS, Vienneau placidly accepted his beats, tried to play optimally, and filed away information about what cards were in his opponent's deck that he could use in the rest of the match. Perhaps his constant "I suck, I don't know why I ever win" attitude takes the pressure off of him and allows him to lose with dignity.

Game 2 went much better for Matt - turn 3 Exclude (Pincer Spider - Tom's first creature), turn 4 Vicious Kavu, turn 5 Mourning (on Glimmering Angel) and Confound your Shackles, and then turn 6 Thornscape Battlemage with its "discard-2" kicker! Swan managed to trade Rooting Kavu for the Vicious beater, but Goham Djinn and Duskwalker finished him off quickly, evening the match at 1 game apiece. 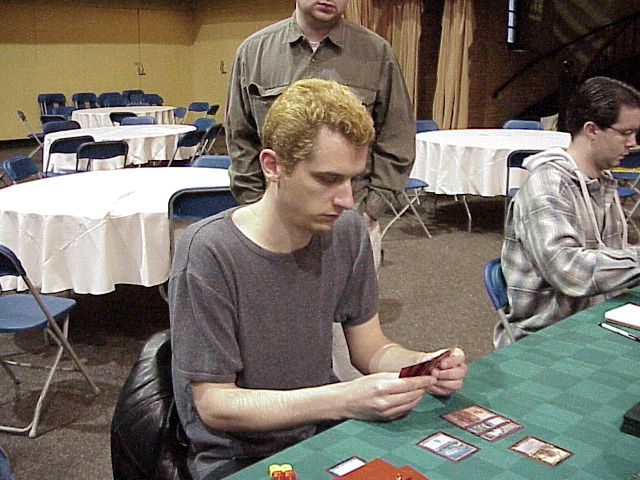 Sunscape Apprentice made it really difficult for Vienneau to block early in game 3. Drawing four Mountains among his 5 land didn't help either. Another way of looking at it is that Swan beat him down quickly with Nomadic Elf, Glimmering Angel, and Kavu Climber. Vienneau crossed his arms, put his hand down on the table, and leaned back in his chair in an effort to get Swan to over commit and walk into Exclude but Swan didn't fall for it. Vienneau finally drew a Swamp and used Plague Spores to remove the Climber, but with just 6 life to work with he was still in trouble. A pair of Mournings slowed Swan down and allowed Vienneau to stabilize the board. Both players flew through their next turns in an effort to finish the match before time expired. Swan missed a few turns of using Sunscape Apprentice to pump up a Mourning Glimmering Angel to do 1 point of damage and that almost cost him. However, when he summoned Yavimaya Barbarian plus Sunscape Battlemage (no kicker), had Fires in play, and didn't serve up an all-out attack on the second extra turn that really cost him. He would have lost most of his team, but he would have gotten through with Sunscape Battlemage. Sacrificing Fires would have meant 3 points of damage to Matt, dropping Matt to 2 while Tom had Tribal Flames in his hand. Tom would have had to survive a counter-attack so he could untap Quirion Elf (his only source of red), but with 20 points of life to play with and only 10 power worth of creatures on Vienneau's side, it seemed like the right play. Instead, Tom said done, Matt drew the one additional blocker he needed, and Tom drew a land.