Round 9: Patrick Mello vs. Kamiel Cornelissen 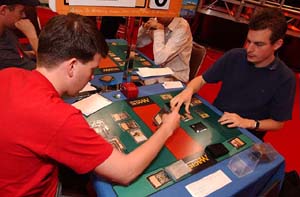 There is no doubt that Patrick Mello and Kamiel Cornelissen are two great players. However, it's been a while since either has had a top finish on the Pro Tour. Cornelissen made the finals back-to-back two seasons ago, and everyone had him pegged as the next big thing. He did follow up with a string of solid finishes, but has yet to return to the Sunday stage. Mello's first and only Top 8 was at Barcelona, where he lost in the Semifinals to his friend Kai Budde, who of course went on to win the whole tournament.

Cornelissen had Wellwisher and a morph creature, while Mello cycled Gempalm Polluter, played his third land in Secluded Steppe, and summoned Shepard of Rot. Cornelissen's morph got through for two damage, and was joined by another. Gustcloak Sentinel gave Mello a bigger body to slow down Cornelissen's attack.

Dirge of Dread gave one of the morphs fear to get through for a little more damage, and Wirewood Herald let Cornelissen gain two life a turn. Mello summoned an Embalmed Brawler that remained at two, and Cornelissen played yet another morph creature. The Sentinel was unblocked to deal three damage, and Mello made a Gempalm Polluter.

One of Cornelissen's morphs attacked, and was blocked by Embalmed Brawler. It flipped over to reveal a 6/6 Primal Whisperer, and the Brawler headed to the graveyard. Nantuko Husk slowed down the attack a bit, but with Cornelissen gaining life every turn from Wellwisher, board parity was not what Mello needed. Cornelissen put himself further ahead, summoning a Wirewood Channeler, which allowed him to bring out Goblin Sharpshooter and an 11/11 Stag Beetle. Cruel Revival handled the Beetle, bringing back a Polluter that was cycled to make Cornelissen lose three life. Dive Bomber gave Mello some damage in the air, but Cornelissen was already gaining four life a turn. 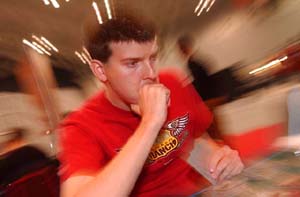 The Sharpshooter killed the Shepard, and Cornelissen played his own Husk, followed by Symbiotic Elf. Sacrificing the Elf let him shoot down Dive Bomber, but he decided not to sacrifice Insects to do more shooting, and sent the turn over. Mello played Festering Goblin, which could kill the Sharpshooter at will thanks to the Husk. This occurred when Cornelissen shot the Husk, but thanks to stack tricks, the Sharpshooter killed Mello's Husk before dying. He untapped, turned a Skinthinner face up to kill Mello's Sentinel, and attacked for the win.

Mello had a two-drop in Starlight Invoker, and Embalmed Brawler came out as a 3/3. Cornelissen played Spined Basher face up as a 3/1, ready to trade with either of Mello's creatures. The Invoker got through for a point, and Mello played a morph creature. Cornelissen missed his fourth land drop, and summoned Wellwisher. Mello attacked for four with his team, played Shepard of Rot, and cycled a Polluter to put Cornelissen down three more. Crown of Suspicion killed the Shepard, and Cornelissen played a fourth land, as well as Elvish Warrior.

Things seemed just about even, until Mello played Noxious Ghoul. This killed the Wellwisher, and Embalmed Brawler attacked. Cornelissen double blocked with the Warrior and Basher, and seemed a bit surprised that both creatures would die in combat (apparently he forgot about Noxious Ghoul making the Warrior 1/2 for the turn). Cornelissen's Symbiotic Elf blocked Mello's Invoker in combat, and Withered Wretch finished the job, trading a turn later with a morph creature (Patron of the Wild). Cornelissen seemed to be rebuilding with Wirewood Herald and Stonewood Invoker, but Mello quickly decimated the board, playing a second Noxious Ghoul. This essentially acted as a one-way Infest, clearing the way for an attack.

Cornelissen wasn't done yet, as Nantuko Husk along with creatures to pump it were holding back Mello's attack. The German was waiting for a Zombie to clear a path, but in the meanwhile was content to gain five life with his Invoker when he had nothing better to do with his mana, Eventually a cycled Gempalm Polluter brought Cornelissen to a dangerous life total, and Embalmed Brawler hit the table to -2/-2 all non-zombies and finish the job. 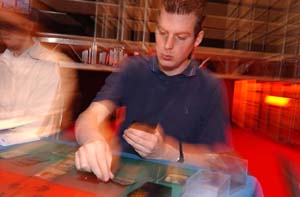 Cornelissen started with Wirewood Hivemaster. On turn three Mello said, "This is the first time I've ever played this card" and brought out Ghastly Remains as a 4/4 creature, to the shock of the spectators. Cornelissen had Wellwisher and Elvish Warrior, as well as the two insects that came along with them.

Wirewood Herald increased Cornelissen's 1/1 army even more. Neither player could mount a successful attack, and Cornelissen was gaining life with Wellwisher while Mello cycled Polluters. Symbiotic Elf and Wirewood Channeler gave Cornelissen some bigger Elves to survive any potential Noxious Ghouls, and more importantly a great deal of life, insects and mana. Cornelissen then summoned Anurid Murkdiver, giving him a very solid clock. Stag Beetle followed, and came out as an 18/18 creature.

Mello- "This should not happen against me!"

Cruel Revival killed the Stag Beetle and brought back a Polluter, which was cycled. Mello found his eighth land, and gained life off the Invoker to counteract the Murkdiver. On his next turn he tapped out to play Riptide Replicator, which would create 4/4 Zombies. Still, Cornelissen was gaining a ton of life every turn off Wellwisher, and was well ahead. Mello summoned Essence Sliver, and noted that he probably should have set the Replicator to Sliver and not Zombies.

Cornelissen untapped, thought, and attacked with all his creatures, which was enough to win. Mello once again noted that the 1/1 army shouldn't be dominating him, and lamented the lack of Noxious Ghoul in the two games he lost.