Phoenix Foundation came into today's Draft portion of the event with a 6-0 record and proceeded to keep their undefeated streak going. In other news, Americans hate soccer, you need oxygen to live, there's a Starbucks in your town, and you will die someday. A win here will guarantee the Germans a spot in the Top 4, and will bring the team's overall Rochester Draft record up to 20-1. 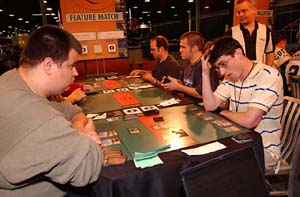 Blume played a third turn Timberwatch Elf; Schneider had a morph creature and Lavaborn Muse. Wirewood Channeler gave Blume another good Elf to work with, and Schneider got through for some more damage as Blume was unwilling to put either of his utility creatures into combat. Glowering Rogon provided Blume with the fatty he needed, although he tapped one too many mana and took a point of burn. Schneider attacked with his team--the Rogon blocked the Muse, and Timberwatch Elf blocked a morph. Accelerated Mutation allowed Schneider to deal lethal damage to the Rogon, although he lost a morph in combat (Bloodstoke Howler).

Krosan Drover gave Blume a third Elf, and he followed with a face-up Nantuko Vigilante. Both players continued to play creatures that stared each other down, until Blume played Rush of Knowledge to get far ahead on resources. Schneider set up a big attack, and after Blume blocked, he unmorphed Bloodstoke Howler and declared he would sacrifice his Dragon Fangs to give all Beasts +1/+1 and trample. Blume seemed puzzled, and pointed out that Dragon Fangs can't be sacrificed for a universal tribal bonus. Schneider was visibly upset with the mistake, but after conceding a few turns later mentioned to Blume that there was nothing he could do to win regardless.

In Long's match against Baberowski, Long's Goblin Warchief attacked once before dying in combat to Zombie Cutthroat. Siege-Gang Commander gave Long a great threat, and Baberowski added Noble Templar to his side. Rock Jockey provided Long with some additional ammunition, while Baberowski put a Keeneye Aven above the ground. Long summoned Mistform Wakecaster, and tried to kill the Aven with the help of the Commander, but Baberowski unmorphed Raven Guild Initiate in response to save it. Even more Commander ammo arrived in the form of Goblin Brigand and Goblin Clearcutter, and the uphill battle was too much for Baberowski to handle.

Budde and Krzywicki's first game was odd, as both players were black-white, but neither could draw a Plains. Budde's deck got to work quickly regardless, as he played Graveborn Muse and Corpse Harvester. Soul Collector let Krzywicki steal the Harvester, and Lingering Death handled the Graveborn Muse, although it was able to live long enough to provide Budde with some extra cards. Budde finally drew a Plains (Krzywicki was still stuck at four Swamps) and summoned Aven Redeemer. Cruel Revival killed the Collector, clearing the way for Budde's Redeemer and Screeching Buzzard to fly through the air for the win. 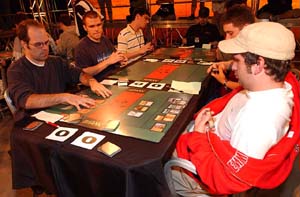 Baberowski got a great tempo draw, playing a turn 2 Aven Farseer and a turn 3 Zombie Cutthroat, which unmorphed and pumped the flier. Long played a Cutthroat of his own to block Baberowski's, which made the Farseer 3/3. Baberowski added Zealous Inquisitor to his side, and Long gained back some tempo by bouncing the Farseer with Echo Tracer. Siege-Gang Commander emerged soon after, causing Long to have very favorable attacks and control of the board. Shoreline Ranger and Mistform Skyreaver gave Long some great evasion, which allowed him to fly over and take the match.

Thanks to Krosan Drover, Schneider was able to get out a face-up Root Elemental a few turns quicker. It was enchanted with Dragon Fangs, which Blume destroyed with Nantuko Vigilate. On the following turn, Schneider played a second Elemental, and put the Fangs right on it. Blume was having trouble stabilizing, and Justin's Frenetic Raptor ensured he'd never have a chance to.

Budde started with Whipgrass Entangler, Screeching Buzzard and Graveborn Muse, while Krzywicki had two morphs and was once again lacking a Plains. Budde pulled further ahead by playing a morph and Aven Redeemer, and Krzywicki finally found the white source of mana he needed and summoned a Redeemer of his own. Budde's board was too developed by this point, however, and he was able to force through lethal damage through sheer numbers, with a little help from Whipgrass Entangler.

Schneider started off strong, leading with Elvish Warrior and gaining some card advantage with Skirk Marauder. Krosan Vorine followed, but Blume came back with Seedborn Muse and Centaur Glade. The Vorine received Dragon Fangs and took down the Muse, but the potentially devastating threat was nullified thanks to Frozen Solid. Blume then summoned Timberwatch Elf, and the game slowed down. Schneider played Beasts every turn, but Blume was keeping pace by making Centaurs.

A few turns later, Marco had eight lands in play, and two 3/3s were coming out every turn. Schneider knew that he was lacking options but that his chance of winning would decrease with every turn that passed by, so he attacked with all his creatures. After Blume sent his Hill Giant team to block, Schneider thought for a while, which visibly irritated Blume, who asked the judge to watch for slow play. A few minutes later, Schneider decided to play Accelerated Mutation on a Charging Slateback and give it trample with Vitality Charm. This attack brought Blume down to 7 life but caused Schneider to lose most of his creatures. A few turns later, Centaur Glade finished the job, sending Phoenix Foundation into the Top 4.