Round 9: Phoenix Foundation vs. My Team Part 17 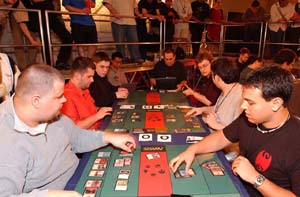 Phoenix Foundation vs. My Team Part 17

It's interesting how team ties are laid to rest when the team PT comes around. Kai Budde and Zvi Mowshowitz, who had three Pro Tour victories between them last season, are team-mates on Godzilla, the English-German-American juggernaut that with protestations from AlphaBetaUnlimited.com, may be the best team in the world. With this affiliation and two obviously incredible talents, one would think that they might have formed a team, but Kai decided to bring his friends Marco Blume and Dirk Baberowski out of retirement, leaving Zvi to form a team with long time ally Alex Shvartsman and YMG's odd man out, Justin Gary. The ploy seems to have worked out well for all involved, with the two teams meeting at table one in the ninth round.

The draft started well for the Americans with only one questionable decision, the placing of Ravenous Rats in Justin's Red-Black deck instead of Alex's black blue, despite the potential to exploit the Rats with Cavern Harpy. Things got worse for the Germans when Zvi opened Thornscape Master for his already white-red-green deck, passing Alex a Repulse, but then the packs turned ugly.

First, Marco opened Ghitu Fire with the final pack of Invasion. Then the Americans opened two Planeshift packs that gave the Germans two strong cards a piece. The early advantage the Americans took with their neighboring color strategy started washing away, with the German opposing color decks benefiting greatly in Apocalypse. By the end of the draft, everyone seemed convinced that the Germans had overtaken their opponents, but the match would be a close one.

Once the match was under way, Baberowski, who has made a habit of asking opposing B players 'are you your team's best player too?', took the fast advantage, with Zvi's mana screw being added to by Hunting Drake followed by Sawtooth Loon. Zvi was able to recast his Bobcat before the Drake came into play a second time and sacrifice it to Primal Growth, but seemed to be too far behind. Meanwhile, Marco's red-white deck was solidifying with Voice of All and Prison Barricade against Justin's red-black, while Alex's bounce-heavy blue-black could only muster two Phyrexian Battleflies and Mournful Zombie. Kai had drew what he described as his most important card, Mana Cylix which, with a deck full of bombs like Anavolver, Goblin Trenches and Ghitu Fire, was the answer to his prayers with a lack of green mana diversification. 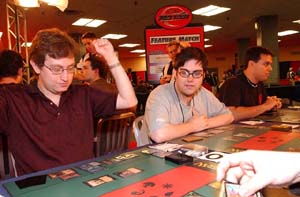 Alex stayed on the attack, with Repulse and Recoil removing blockers as he reduced Kai, who had an unkicked Scuta in play, to two. Kai cast one more Kavu Climber in the hopes of drawing an answer, but he couldn't stop the flyers, one of which attacked for a first game win for Shvartsman. Around the same time however, Justin was staring at a table with a number of creatures for Marco and none for himself, and after he cast a desperate Urborg Uprising, was forced to concede what his team felt was their worst match up. Zvi however was fighting back, with Dirk's controllish blue-black-white deck unable to unload all of the cards in his hand against Gerard until Zvi's life total had climbed back to a respectable level. He then cast Slingshot Goblin as the second game in the other matches began, but it was too little too late, as Dirk finally swarmed, hitting the Tokyo champion for just enough to reduce him to zero.

Game two started fast in the C seat, with Alex playing Vodalian Zombie and Cavern Harpy to Kai's Quirion Explorer and Thunderscape Apprentice. Kai tried to Jilt the two blue-black creatures, but Alex used his own Jilt to save the Zombie before casting Stormscape Familiar and then Harpy again. Marco was starting fast with Firebrand Ranger at the other end of the table, but Justin was more than ready with Ravenous Rats joining the fray. Dirk and Zvi having finally shuffled, they were ready to go, with Zvi mulliganing to six before beginning the game.

Kai had added Lava Zombie to the fray and the red-black fatty immediately started going on the offensive. Meanwhile, Marco had added four more creatures to his attack while Justin sat without red mana, eventually conceding to the mana screw. Kai's race was going well, but Alex had Washout waiting, removing Kai's red creatures from the field of play with the ensuing attack leaving the score at 5 to 4. Kai's next attack saw Alex take a chance by not blocking, and Kai had Explosive Growth waiting, and with it the win to even the score at 1-1. 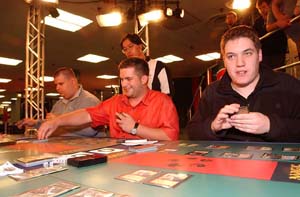 Zvi's mulligan had turned out well, with Coalition Honor Guard and Obsidian Acolyte hitting the table early, but Dirk's draw was even better, with two fliers hitting for four a turn while Vodalian Zombie held off Zvi's quick Green creatures. Dirk's Reviving Vapors put him at a safe distance from death, and two turns later, the match was over, with the Germans taking a 2-0 lead.

Alex started game three out right, with one of his three Rootwater Hunters taking out Kai's Quirion Explorer after a third turn Anavolver. The Volver went unopposed, taking Alex to six as the Sideboard columnist sat with Suffocating Blast in hand. Kai wasn't outplaying the GP King by not casting spells, rather he couldn't, with four land and a hand full of five casting cost spells. Alex's Blast finally resolved after Vodalian Zombie and a second Hunter hit play, and he soon salvaged a win for his team amidst Kai's begging Ghitu Fire to emerge from the top of his deck.