While Gabriel Nassif is no stranger to coverage readers, American Melissa DeTora may not be a name you're so familiar with yet. This is DeTora's sixth Pro Tour appearance however, and after listening in on their pre-game shuffling chat it's clear these two have played against each other enough at this point that neither is sure who has the overall edge in record for the match-up. 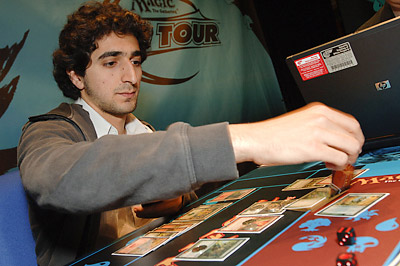 Gabriel Nassif commands an army of huge red-green creatures. As far as decks, this match-up features an interesting mirror of red-green archetypes. Red-green is one of those color combinations that can go a lot of directions. Whereas DeTora is sporting an Elf Warrior deck with a Giants subtheme and lots of fat, Nassif is running a red-green beatdown machine with multiple Bosk Bannerets that is absolutely filled with Shaman creatures, particularly red Elemental shamen. In fact, Nassif doesn't have a single Treefolk in his deck that isn't already a Shaman. So, whereas lots of other red-green decks this weekend often seem to be more likely to sport themes like treefolk plus removal, this match-up features two other and completely different takes on what red-green is capable of, both of which show off the new power and options Morningtide brings to the environment.

On the play Nassif looked good coming out of the gates with Elvish Warrior and Sunflare Shaman, but an Imperious Perfect from DeTora that Nassif had no removal in hand for completely shut down his offense. Nassif did his best to keep developing his board, but turn after turn DeTora would make a good-sized creature like Game-Trail Changeling or Lowland Oaf, plus a 2/2 Elf Warrior token. Falling rapidly behind in development, Nassif was forced to play out an Incremental Growth to get his forces strong enough to hold the fort, but despite the powerful sorcery was still stuck on defense while the American's army continued to swell.

Wanting to attack with her giant army but deterred by the size of Nassif's countered up forces, she could only laugh, "They're so big!" Nassif, expressing his own frustration, shot right back, "There's so many!" He pointed at the horde of Elf Warrior tokens building on her side, which at that point had hit seven and required a second six-sided die to show them all, a bad sign by any account.

A couple more turns of this and DeTora was ready to make her move. Verifying that he had just two cards left in hand and only two mana up for any tricks, DeTora sent in all her tokens, two Giants, the Game-Trail Changeling, and Leaf Gilder, with only Imperious Perfect staying back (as Imperious Perfect so often tends to do). Nassif set up his blocks as well as possible, but a reinforce on the Game-Trail Changeling brought it up to 6/6 trample in combination with the Imperious Perfect. Nassif ended up losing nearly his whole team and was rewarded with 14 damage to his face in the process. One quick draw phase later and he quickly scooped up his cards in the face of DeTora's overwhelming offense.

For this one DeTora again had Leaf Gilder followed by Imperious Perfect, but Gab managed a better offense this time using Bosk Banneret to drop out an Innerflame Acoylyte and a second Bosk Banneret. Next was double Sunflare Shaman for the bargain price of

. DeTora dropped quickly to 11, and next turn things got worse when a double-discounted Glarewielder came down to keep her two blockers out of the action and join an alpha swing in the process. Making an Elf Warrior token after the effect had resolved, the first thing DeTora said was "Am I dead already?" Surveying the board a bit more, she ended up using a Moonglove Extract on one of the Sunflare Shamans and then killing the other off with her new Elf token, knowing that, with only 4 life left, the only way to pull this one out was to make sure those particular Shamns were out of the picture.

DeTora got back to the business of shoring up her defenses with some serious fat in the form of Game-Trail Changeling and then a Changeling Titan, both of which were pumped by the Imperious Perfect, which was also still pumping out a 2/2 Elf Warrior token each turn. Despite his quick start things were slipping away from Nassif again as this game's board increasingly began to resemble the first. 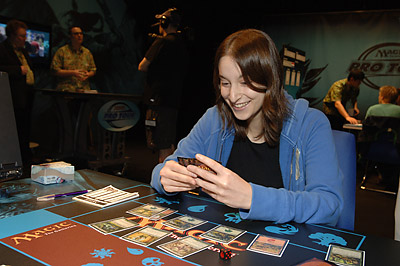 Melissa DeTora, by contrast, commands a huge army of red and green creatures. Putting up some of his own fat, Nassif evoked Walker of the Grove for a 4/4. In came the 8/8 Titan, dropping Nassif to 9, but next time the champion came in Nassif was able to step in front of it with a Bosk Banneret and then wipe it out with an awesome Lace with Moonglove, eliminating the massive beater and drawing a card in the process.

Next was Lys Alana Bowmaster for DeTora and her 4 life, while it was Fire Juggler for Nassif on 9 life. Nassif spent a lot of time pondering here and eventually elected to go with Rivals' Duel targeting his 4/4 Elemental and the Perfect. The Perfect made token #5 and then finally went to the graveyard, eliciting a relieved "Sweet!" from Nassif. Unfortunately for him, a Tarfire from DeTora meant the 4/4 was done for as well.

Despite the life deficit DeTora had the better board position now that the 4/4 was out of the way and was ready to go on offense. Game-Trail Changeling, Leaf Gilder, and the Bowmaster charged into the red zone while the five 1/1 Elf tokens stayed back for defense. Nassif had to think quite a bit here, trying to find the least hideous scenario that might leave some way out. He opted for double blocks on two of the creatures. Dropping to 6 life, he was down to just a Bosk Banneret when the smoke had cleared. No, DeTora seemed to say, things are even worse than that, when she played an end-of-turn Gilt Leaf Ambush, bringing her token armada to seven. In they came next turn, and while Nassif had his own Ambush he was down to just 1 life and no real options. Another Mountain off the top and it was all over. Revealing the last card in his hand, he showed the Incremental Growth he'd had the entire game (one of two in his deck), having never drawn the second green source to get the critical sorcery off in time.