instantly regretted not bringing out the power cable for my laptop when a judge swooped in to snatch up their decks for a routine check. With any luck, this wouldn't be a repeat of the Tsumura on Darland match Friday night that stretched on to the very end of the round. To make use of the wait, Saitou rolled out the 20-sided bauble o' randomness, only to see it turn up a lowly one. Krempels belly-laughed and then rolled himself up an 11.

The deck check came back, and Krempels got minor warning for worn sleeves but other than that, all was good in the world and we were ready to start. 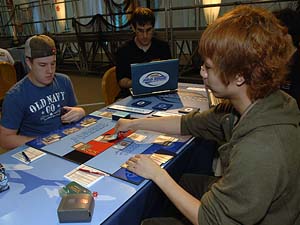 I was a little worried when Krempels checked out his opening grip and I saw black and white cards. If this was going be a mirror match, I needed a runner to fetch my power cable. Thankfully, Saitou lead with a Birds of Paradise and a Shivan Reef, and I breathed out for the first time in what seemed like hours.

Krempels' turn-three Phyrexian Arena got bounced by a Mana Leak, and Saitou let everyone know how it was going be by plumping up his board with a Rumbling Slum. Krempels swiped it aside with a Mortify and not long after, both players tried to claw ahead on cards. Krempels landed another Arena and Saitou's Birds of Paradise crashed into the red zone, only to be replaced by a Ninja of the Deep Hours and joined by a Kird Ape. A Kokusho ran afoul of another Mana Leak and Saitou then busted out a Thoughts of Ruin.

"Oh-ho no, that's bad" Krempels bemoaned with a chuckle.

Both players were left with one land, but Krempels' was at least an Orzhov Basilica, accentuated by a matching Signet. Saitou played a second land and passed it back. Krempels' Phyrexian Arena saved his life. The first cards was a Swamp, the second the Wrath of God he needed to stay in the game.

The Arena continued to feed the American the lands he needed to eventually play out a Debtors' Knell. Once he managed to have not only Kokusho, the Evening Star and Yosei, the Morning Star but also a Dimir House Guard to set up the lock, Saitou decided to pack it in and give Game 2 a go.

Saitou moved his Electrolyzes to the board in favor of more disruption, including Naturalize. Krempels beefed up his lower end with the new white creature of choice, Descendant of Kiyomaro.

When the aggressor in a match gets to play first, they really get to show their true colors. Saitou lead again with a Birds of Paradise, but followed it this time with another Birds and a pair of Kird Apes.

"Slow down!" Krempels pleaded as he made the 'Signet, go' play on his second turn. Saitou again attacked with one of his Birds, flipped out the Ninja of the Deep Hours and followed it up with a Naturalize on Krempels' Signet. He managed to Faith's Fetters the Deep Hours, but the Ape duo continued to come in and come in hard. 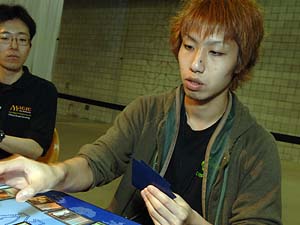 "It's a blowout," Krempels directed at Randy Buehler, who had wandered over for nosey.

"Doesn't mean it isn't a blowout. I have been attacked by Birds multiple times."

To prove the point, Saitou then proceeded to upgrade both Kird Apes with Ninja of Deep Hours numbers two and three.

"You have the Counterspell this time?"

Sure enough, a remand stopped a second Faith's Fetters and Krempels then scooped in the face of double Cerebral Vortex.

"I got him to 12 right? That's gotta count for something," Krempels said.

I didn't have the heart to tell him that none of damage was actually caused by anything remotely Orzhov related.

Saitou got off to an unfortunate start for Game 3 with a mulligan to five.

"The worst part about this deck," Krempels complained, motioning to his hand of cards, "is that they can mulligan all they like and it doesn't cost them. What am I gonna do, kill them?"

As usual, Krempels developed his mana with the help of Orzhov Signet and this time managed to keep the opposing Ape population down with a Wrath of God, and also kept an Umezawa's Jitte under wraps with a Faith's Fetters. Saitou could see the writing on the wall when Krempels Transmuted a Dimir House Guard for another Wrath of God, and held in back instead of cutting Saitou's mana in half by downing a pair of birds.
Krempels pushed the point with a Kokusho, and Saitou asked for a Wrath by playing out a Rumbling Slum. Kokusho flew on over, and when the Wrath hit the stack, Saitou pointed at a Miren, the Moaning Well questioningly. Krempels shook is head laughingly, not wanting to open himself up to a Mana Leak or a Remand.

The board cleared and after Kokusho worked his magic, the life totals sat at 26 - 3 in favor of Krempels. Saitou made another Rumbling Slum but packed it in very quickly once Krempels threw a second Faith's Fetters on the Jitte to prevent the possibility of Saitou ever drawing the Naturalize to bring it back on line. That doomed him to a death at the hands of his own Rumbling Slum.

Laptop power: 44%, and I headed back to the security of a power outlet.