Round 9:
Pulling the POY Back to the Pack

ith the rest of the potential Player of the Year field needing Yuuya Watanabe to stumble, Eric Froehlich and a key Putrefy on a 0/5 might have just struck the first blow to bring the Japanese pro back to earth.

Leading his nearest competitor by four Professional Points, and ahead of Froehlich himself by 12, Watanabe still needs a strong finish to earn his third Player of the Year title. But dropping two quick games to Froehlich was clearly not part of the plan.

Neither was the mulligan to four cards that doomed him in the second game and made the outcome of the match rather anticlimactic.

The first game, however, was certainly something to talk about. 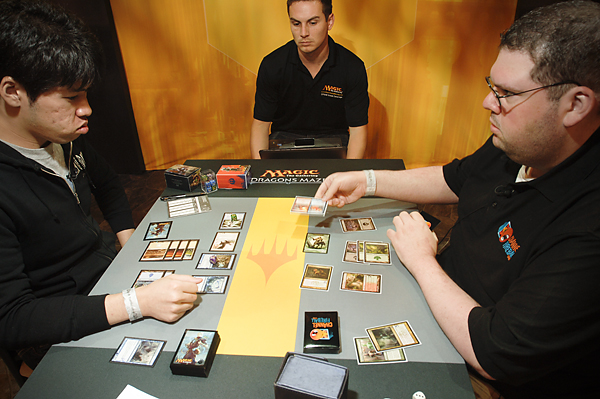 Eric Froehlich is hoping to keep Yuuya Watanabe from picking up anymore momentum in their race to the Player of the Year title. A win for Froehlich in this round has helped that cause.

Watanabe's streamlined Azorius deck was packed with fliers and tempo plays, and he came out strong in the first game with Metropolis Sprite an Sunspire Griffin followed by some defensive elements. Given another player and a different draw, Watanabe very well could have cruised to an easy win.

But Dreg Mangler and a plethora of removal spells let Froehlich set up a lethal Punish the Enemy after throwing the Red half of Turn // Burn directly at Watanabe's face.

What enabled Froehlich's quick, tempo-fueled first game win was his aggressive use of removal. Facing down the two fliers, along with Simic Fluxmage and a Murmuring Phantasm, Froehlich used Putrefy—one of the premium removal spells in the format—on the lowly 0/5 Defender in order to keep the pressure high and put Watanabe to single digits. 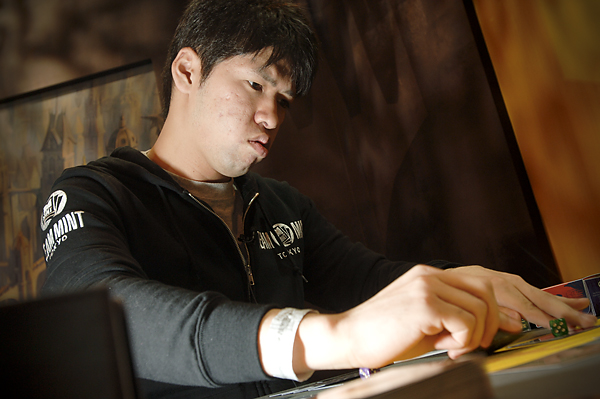 Watanabe's Azorius deck has fliers and roadblocks, but when the roadblocks are torn down, things get hairy when it comes time to race.

"He's playing Azorius, so there's not going to be a lot of players that have huge toughnesses. He has to keep attacking with his fliers," Froehlich said.

He also had the option to cast Burn on the Metropolis Sprite should Watanabe ever pump it, but when the window was opened, Froehlich simply dealt 2 to Watanabe himself to close out the race.

Watanabe, naturally, had lethal on the board otherwise.

"It's very hard to race when I have two 3/3s racing his fliers," Froehlich said. "It was a game where there weren't very many combinations of cards that would cause me to lose."

The second game offered none of the drama of the first, as a Dreg Mangler and some bloodrush-fueled attacks killed Watanabe fairly quickly. 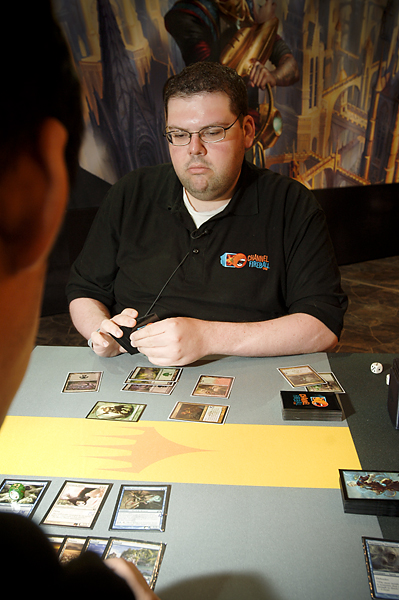 Froehlich makes short work of his opponent in Round 9.

Despite what could prove to be a key win in Froehlich's pursuit of Player of the Year, he wasn't terribly happy with his deck.

"I put together the best deck I could. It's very mediocre, but we'll see."

He said he started with a number of Izzet cards, but Putrefys being passed to him in the middle of the pack convinced him to shift into Golgari. To do so, however, he had to pass Beetleform Mage, a card he thinks is among the best commons in the format. When he was forced to ship the first of the Simic 2/2s, he felt like he couldn't then take the second one that came his way, believing he'd be cut off in the all-important Gatecrash pack.

"I got some mixed signals and put together the best deck I could. I think I drafted pretty well," Froehlich said.

Golgari, he said, is difficult to draft, but Putrefy is just too clear of a signal to pass up. For this round at least, the decision worked out, even if Froehlich has had a tough time drafting on Day Two."On Day One drafts this year, I am X-0. My Day Two drafts? Not so much," Froehlich said.

But despite the anticlimactic finish to the match and Froehlich downplaying his draft deck, the matchup still left plenty to talk about in the bigger picture, especially concerning the Player of the Year race.

"You can write about how we're both very charismatic, the Player of the Year race, how we have a great bond," Froehlich said. "And if we spoke the same language, that might all be true."

What is certainly true is that Watanabe could continue to rule modern Magic history this weekend with his third Player of the Year trophy. Coming into the weekend he sat at 62 points, with Ben Stark (58), Josh Utter-Leyton (55), Tom Martell (52), Shahar Shenhar (50), and Froehlich (50) hot on his heels.

Losing to Froehlich certainly isn't the end of the world for Watanabe, but pushing one of his chief rivals to 7-2 while falling to 6-3 himself certainly doesn't help.

Match notes: Both players went 3-0 in Draft on Day 1 and 3-2 in Constructed...Froehlich scored his third Pro Tour Top 8 in Montreal at Pro Tour Gatecrash this year. Watanabe has two PT Top 8s, plus his win at the Players Championship last year. If Watanabe finishes in the Top 16, Froehlich would need to win the tournament to win Player of the Year. If Watanabe Top 8s, only Utter-Leyton and Stark could catch him, and then only with a win. If Watanabe finishes worse than 25th, Froehlich can catch him with a Top 8 finish. Both Froehlich and Watanabe are already qualified for the World Championship taking place later this year.