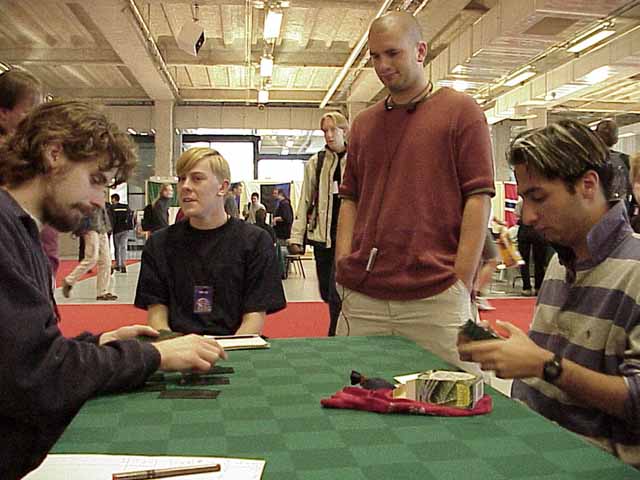 Raphael is a familiar face at this level, he lost in the semi-finals of last years event. He also has a Pro Tour top 8 finish at Chicago 1999 and at Worlds in 1998. He also won Grand Prix Lyon. Ben is the reigning English National Champion and a member of the European Alliance. Ben is one of only two undefeated players going into this round, he has six wins and two draws. The other undefeated player is Noah Boeken.

Ben has a Wildfire deck similar to the one used by John Ormerod whereas Raphael is playing a Replenish deck which brings Opalescence and the Parallax enchantments back from the graveyard to lock up the opponent and quickly attack with 4/4 creatures.

Ben brings out a Tangle Wire on turn three to try and slow Raphael down. This is a great card against the deck because a lot of the spells require four mana to cast. Raphael rapidly finds an answer with a Frantic Search just after Ben casts a Covetous Dragon. The Search allows Raphael his full four mana for one turn and he puts it to good effect casting a Parallax Wave and removing the Dragon for a while. Next turn Raphael has another Frantic Search and this one lets him cast Opalescence, turning the Wave into a 4/4 creature. By now the Tangle Wire has faded sufficiently for Raphael to have plenty of mana available again, and he casts Replenish. Since he discarded a pair of Parallax Waves and a further Opalescence to the Frantic Searches, this is enough to force Ben to concede. It's slightly unusual for a Replenish deck to run so many Searches in the main deck, typically they will only run one if they have any at all.

Ben has some great sideboard choices against Raphael's deck, bringing in lots of land destruction (Boil and tectonic Break) and Mogg Salvages in case Raphael is using Diamonds or Grim Monoliths to speed himself up. Raphael's sideboard isn't so useful in this match up.

Both players bring out lands at the start of the game, the first spell being a turn three Grim Monolith on Raphael's side. This sets up a good turn four for Ben, with a Mogg Salvage taking out the Grim Monolith for no mana cost, and a Boil destroying two Islands and leaving Raphael with only an Adarkar Wastes. Raphael tries to rebuild his mana base, but Ben isn't allowing it as he casts a Thran Dynamo and then a Tectonic break destroying three lands of each player. It looks like Raphael is totally locked up with only an Attunement in play when Ben casts a Mishra's Helix - he easily has enough mana to tap all of Raphael's lands every turn, and the only way Raphael can get out of the lock is with Frantic Search. However Ben also has two Rishadan Ports. Ben starts whittling away Raphael's life with a Ghitu Encampment, and plays a Tangle Wire as well. It seems he has more than enough ways to lock up Raphael's land and win the game, but at ten life Raphael draws his second Frantic Search and decides to go for it.

He taps his land for mana before the Tangle Wire goes off and Frantic Searches, drawing another Frantic Search. Ben uses his Mishra's Helix - the lands are tapped for mana and another Frantic Search. Then Ben uses both his Rishadan Ports, and Raphael casts his third Search, untaps his lands, and casts Replenish for an awful lot of enchantments. Ben concedes in disgust at his game-losing mistake. If you didn't already see it he could use his Rishadan Ports one at a time, and since Raphael had only three untapped land he would have needed a fourth Search to untap his land after the second Port was activated.