Round 9: Re-Elect Gore vs. Aquamoebas Anonymous 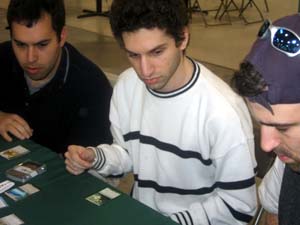 Stern and Steve Wolfman picked up Jon's Kingston classmate Nicholas Leary for this tournament season. Stern is a former member of the Canadian National Team and has numerous high money finishes under his belt. Wolfman was one of the members of the fragmented 2020 that almost upset the Phoenix Foundation in the finals of the 2002 team Pro Tour. Despite not having the credentials of his teammates, Leary more than held his own with a 6-2 record on the day that included beating Alex Shvarstman and Eugene Harvey. One of the great things about the team format is that more experienced players get to pull their friends up from the PTQ ranks into the spotlight of the feature match area.

Finkel got things started with a Tel-Jilad Chosen. Stern had a Myr Retriever and followed up with a Nim Lasher that kept the Chosen at bay. Finkel's Darksteel Ingot made for a turn four Tel-Jilad Archers and then a turn five Triskelion which killed the Retriever and the Lasher--Finkel beat in for four.

Stern cycled an Aether Spellbomb but could not find a second blue for his Hoverguard Observer. Finkel kept up the pressure with a Hematite Golem and Stern was forced to play out another Lasher to absorb a counter from the Triskelion but he was just spitting in the wind at that point and they moved onto the second game.

Stern opened with an Aether Spellbomb. When Finkel cast Slith Firewalker an Echoing Decay stopped it dead in its tracks. Stern made a Nim Lasher and Irradiated Finkel's Tel-Jilad Wolf and attacked for four on the next turn. Finkel frowned and played a Chosen and a Lifespark Spellbomb--when the Chosen blocked Stern saved his guy with his blue Spellbomb. Finkel cycled his spell bomb and played a Tel-Jilad Exile.

Stern got in for another four while Finkel was short of mana to regenerate. Finkel played a Warhammer and sat back with two mana open for regeneration. Stern had to stay back but Finkel had his Triskelion to kill it and attacked for two. Stern played a Nim Devourer and Finkel used a counter to kill it as well. He equipped his Exile and attacked with both his guys--replenishing a counter on the Triskelion with Battlegrowth.

Stern's Neurok Spy was smoked with an Entwined Barbed Lightning and an invigorated Finkel stood up and spurred on his mates, "C'mon fellas!"

The Wolfman/Kibler match-up was still mired in the first game. Eric Froelich was up one game on Nicholas Leary.

Kibler sighed in relief as the two players moved onto the second game with the first one going to Kibler, "You didn't get either Shaman or Fireball! Of course, I could have gotten my eighteenth pick Death Cloud--that would have been good."

Stern leaned over to defend his gaffe in the draft, "I didn't know what it did--I told them to tell me about all the good rares."

Kibler smiled, "You got an Echoing Decay." Kibler went on to further espouse the virtues of the powerful black rare, "It's only the best card in the set…that someone has been writing about playing in Type 2. I have been saying that Blinkmoth Nexus is good against Cloud in Standard and yesterday I Clouded someone down to one land. His next draw was a Nexus and I lost--sometimes you don't want your theories validated so ironically."

Wolfman was agonizing overt his decision to keep or not which made Kibler happy, "This is one of those situations that you are happy either way. If they keep you are excited and if they mulligan you are happy too. Not that I ever wish my opponent's anything but the best of luck."

That seemed to make Woldman's decision for him, "Since you are wishing me the best of luck I will keep it."

Kibler's turn three Dross Golem was Deconstructed into Elf Replica. Kibler got it back with Moriok Scavenger and traded the Scavenger for Wolfman's hasty Berserker.

Kibler's Hoverguard Observer was followed by Pewter Golem and Dross Golem after Wolfman made an Exile. Wolfman took advantage of a tapped out Kibler to sneak in two points with his Exile and Echoing Ruin the Pewter Golem but Kibler's 3/3 flier just kept on coming. Kibler made a six-mana Myr Enforcer only to see it Shattered. Exile got in for two more points and Wolfman tapped out for Wand of the Elements--with only a lone Mountain to activate it.

Kibler's Dross Golem ate the Elf Replica and Kibler paid pull price a Quicksilver Behemoth. Wolfman cashed in a Mountain for 3/3 and played a Krark-Clan Grunt off of a fresh Mountain. Kibler had another Dross Golem and it joined the Behemoth on the ground. Full price or not, Kibler was happy with his Behemoth holding the fort, "I am so glad I did not listed to Jon--he wanted me to cut this." 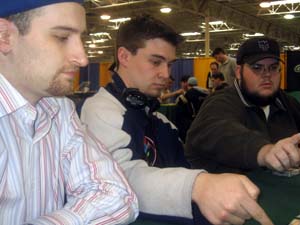 Wolfman never found an answer for the flier or the feared Dross Golem and the match went to Re-Elect Gore.

Grab the Reins from Froelich secured a clean sweep.