Round 9: Release the Mustache!

e'll get to the Round 9 feature match between new guy Jared Boettcher and long-time Pro and 8th-ranked Yuuya Watanabe in a moment. First, a picture of Watanabe with mustache sleeves. 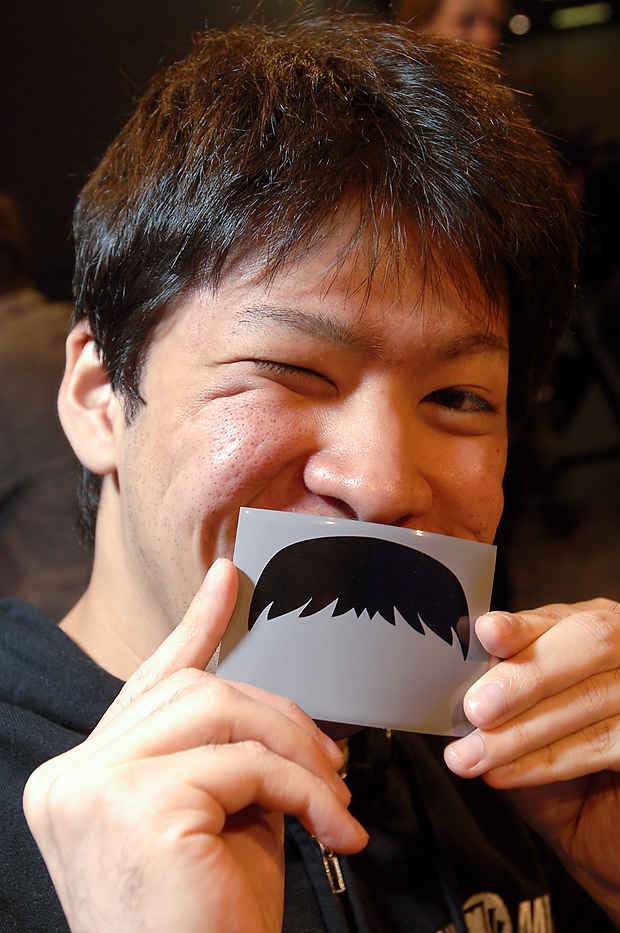 See? Totally worth it.

Back to this coverage thing. Let's start with the new guy. This is Jared Boettcher's second Pro Tour, but he's already making a name for himself and kind of running up the score over the last year or so. We first met Boettcher at Grand Prix Washington D. C. in 2013 when he finished a stunning second place. He followed that up with a third place finish just this year in Cincinnati. But the real kicker is that Boettcher made his Pro Tour debut just a few months ago in Valencia – and finished in 9th place.

It's a short resume, but what a resume it is.

It can't, however, compare to his competition across the table this round, a man who has accomplishments Hall of Famers might envy. And, quite frankly, he seems likely to join them in the coming years.

No. 8 Ranked Player Yuuya Watanabe is one of Japan's brightest stars and one of the game's most impressive Pros. He has a whopping 20 Grand Prix Top 8s, including an astounding seven wins, as well as two Pro Tour Top 8s and a lifetime winning percentage of nearly 65 percent – good for ninth best in the field. In fact, his lifetime win percentage in drafts – 66.8 percent – is the highest among competitors here this weekend. 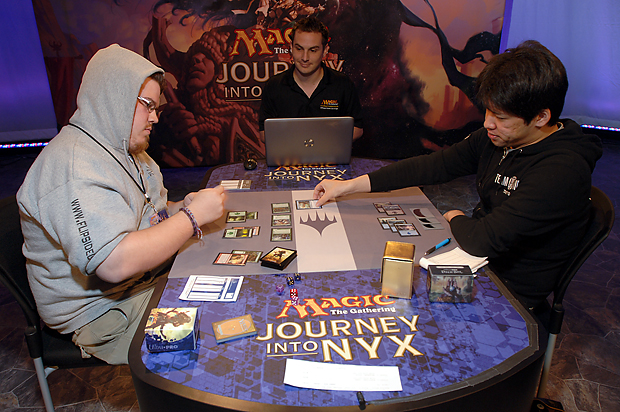 Jared Boetchher's career is short but very impressive. However, it's hard to match up most player's careers with No. 8 Ranked Player Yuuya Watanabe.

Oh, yeah, and he's a former Player of the Year, won the 2012 Players Championship, and is generally just about the best player in any room he walks in to.

All of that said, Boettcher likes his chances against pretty much anything, for at least two of the next three rounds.

In Magic player speak, that means Boettcher likes his deck, but feels its lacking a key card or two that keeps it from being downright insane. Still, he has a number of strong creatures – including the dangerous Hero's Bane – and some burn to go along with his menagerie of beaters. He'll be looking to hit hard and attack often in order to close out the game relatively quickly.

Watanabe, on the other hand, would like to see the game go long, and not just because it means Boettcher's plans have gone awry. Watanabe drafted a controlling blue-black deck that tops off with a Tromokratis. His pair of Pharika's Chosen and bushel of removal are going to attempt to keep the board clear and the path to victory full of Divinations and Shipwreck Singers.

True to form, Boettcher came out fast while Watanabe developed his board. Renowned Weaver and Swordwise Centaur kicked things off, but a Nyx Infusion halted the 3/2 before it ever really got going.

But Boettcher wasn't done yet. A Setessan Oathsworn and the Weaver led Watanabe to trade Chorus of the Tides for a trick, and Boettcher continued to push forward with a second Swordwise Centaur. Watanabe traded Prescient Chimera for another trick, but he was well behind on board despite seeming content to throw away his creatures to get Boettcher's combat tricks out of his hand. 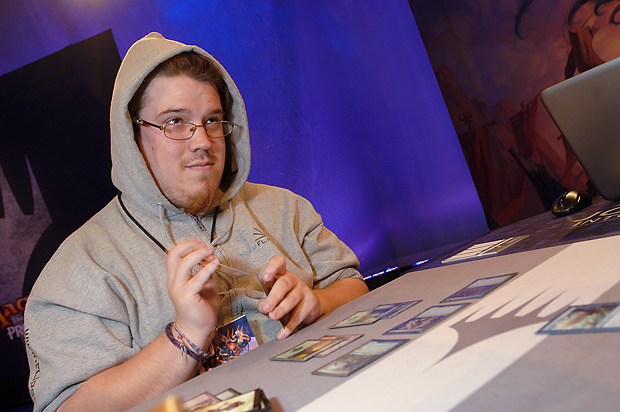 Boettcher gets his early beats in, hoping to sink Watanabe before the Japanese pro's deck goes online.

It turns out, that was exactly the plan.

Rise of the Eagles bought him some reprieve, as Boettcher took a turn off from attacking to play Anthousa, Setessan Hero. It looked like it could lead to a big attack, but it was an attack that never came.

It never came because Watanabe had a plan all along. A plan so simple and yet so awe-inspiring that it froze Boettcher from ever threatening an attack again. That plan?

Tromokratis, the krakeniest of all krakens, effectively held off Boettcher's team for several turns while a bird token picked up an Ordeal of Thassa and got big. With no way to break through THE KRAKEN and no way to stop the bird, Boettcher's green menagerie quickly sunk under the weight of Watanabe's forces.

The second game, however, was full of far fewer dramatic moments. Mulligans sunk Boettcher's chances right from the beginning. You could say he was pulled under the weight of some bad draws, dragged down into the deep end of card disadvantage. He pretty much drowned under his inability to cast spells on time or effectively. He was gasping for air pretty much the whole time.

Truth be told, Boettcher actually made a game of it, despite his mulligan to five. Lightning Strike effectively removed Watanabe's first play, and three ground creatures tied things up in that area as both players actually began to flood out. Boettcher fell behind early because of his mulligan, but caught up thanks to a bit of flooding on both sides of the table.

In fact, Boettcher was even able to effectively attack – roughly a dozen turns in – thanks to Lightning Diadem and Aspect of Hydra. He effectively killed two of Watanabe's creatures, which was exactly as many as March of the Returned brings back. Boettcher could only chuckle as Watanabe brought back a pair of creatures, including Disciple of Deceit and Black Oak of Odunos. A Divination off the top provided yet more card advantage against an opponent who was already treading water. 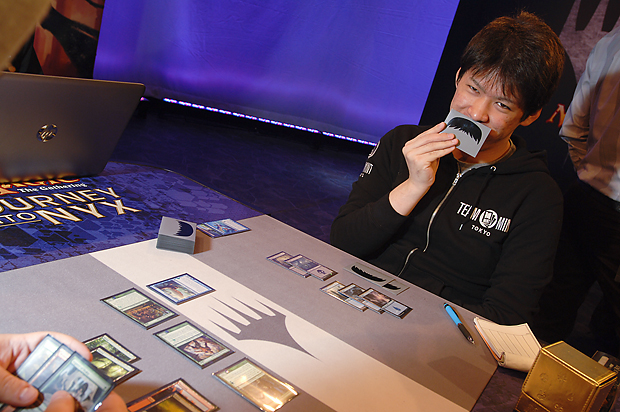 Things just kept getting worse for Boettcher at every turn. Triton Tactics ambushed an attack and completely wrecked the American's board presence. Hero's Bane was big enough to swim with the big boys, but Watanabe used Disciple of Deceit to search up a Baleful Eidolon in order to enchant Boettcher's Bane...in order to kill it with Feast of Dreams. As you do.

There were a ton of moving parts, and Watanabe was expertly managing each and every lever. He was in command from the start, and never let go of the wheel.

It didn't take much after that to sink Boettcher's chances this round. 3-0 wasn't going to happen for the sophomore Pro Tour player, but at least that 2-1 was still in play.

Watanabe, meanwhile, moved on to 7-1-1. The one gap, if you can even call it that, in his Hall of Fame resume is that he has "only" two Top 8s and no wins. Granted, he's just 25 years old, but a Top 8 this weekend or, even better, a win, would almost surely cement his odds of being voted into the Hall of Fame in his first year of eligibility.

Just as pressing in the short term is the fact that Watanabe is still chasing a spot in the World Championship, as well as Platinum status for next season. At 34 points, Watanabe would have to get five points above the minimum (he gets three each just for showing up at this one and the next Pro Tour, and needs to get to 45) in order to maintain his status, which is no sure thing. A Top 8 here would seal the deal and give him a leg up in the race to represent Japan in the year's most prestigious tournament. A solid finish would keep him on track. Anything less than that and the former Player of the Year might just be in trouble.

But, then again, it's Yuuya Watanabe. How could you ever doubt this face?

Once more for good measure.