Round 9: Ryoma Shiozu vs. Masaya Mori 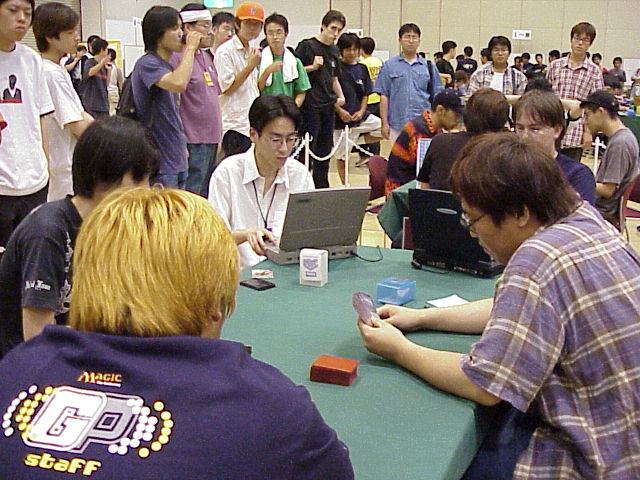 Masaya Mori's name has always been mentioned on the short list of Japan's elite players. While his name is often confused with Katsuhiro "Rookie of the Year" Mori, Masaya is the only person to have won back-to-back Continental Championships. His rapid deliberation and blinding play speed add to his vaunted reputation. Today Mori is running the popular Domain deck, running 3 Hippos and Mystic Snakes in addition to the standard countermagic.

The weathered veteran faces Nagoya resident Ryoma Shiozu, who is playing the most popular deck at the feature tables, the blue-black-red Counterburn special. While the deck was less than widely respected in North America, the combination of Urza's Rage, Undermine, Shivan Zombies, and Nightscape Familiars with liberal amounts of bounce and creature removal enjoyed immediate popularity in Malaysia and the APAC region. While many players have found success running this deck at Kobe this weekend, Shiozu faces a daunting challenge facing the skilled Pro.

Shiozu played first and got a Shivan Zombie on the Board, beginning the beats. He Iced a land during Mori's 3rd upkeep, taking a stab at Mori's tempo. Shiozu went on to attempt a Fact or Fiction, and Mori seized the moment to Harrow, sacrificing his Yavimaya Coast for a pair of islands. He then used his newfound islands to Evasive Action the Fact or Fiction. Mori continued his reign of terror with a Fact or Fiction of his own that turned over Evasive Action, Fertile Ground, Sunscape Familiar, island, and Collective Restraint. Mori snagged the Evasive Action and Sunscape familiar.

Unlike most control versus control matchups, the action continued to flare up. With Mori tapped out, Shiozu then played his second Fact or Fiction. This time it resolved, splitting an Undermine and Nightscape Familiar and a land in to the graveyard, keeping a land and Prophetic Bolt. Mori's Collective Restraint was Undermined, but a 3 strength Evasive action kept the Restraint intact. A Void for 3 stole 2 Dromar's Charms from Mori's hands, but the Collective Restraint continued to slow Shiozu's efforts.

Just as misery begets misery, Shiozu blasted Mori for 4 and acquired another Bolt. Mori blew up the world with a Global Ruin and brought out the Purple Hippo of Certain Doom (Questing Phelddagrif) and dropped a Sunscape Familiar to keep Shiozu honest. However, Shiozu's little Shivan Zombie that could ghosted its way through the defense and an Undermine was just enough to save the Zombie's boss. 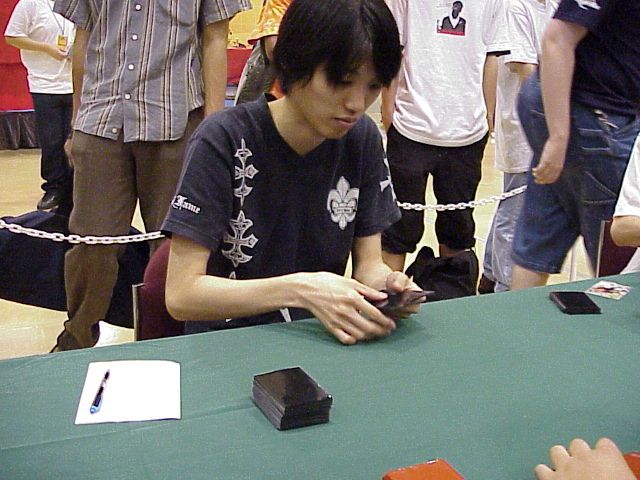 Mori started Game 2 in a bombastic fashion by playing land after land after land to intimidate the opponent. He stalled on turn 4, and Shiozu capitalized on Mori's dry spell by throwing out an Addle. Shiozu named Green and chose a Harrow over Mystic Snake. The two then resumed their pulse-pounding land dropping.

Mori attempted to Fact or Fiction but was answered by Gainsay. The same thing happened two turns later, except the more versatile Spite landed into the graveyard. Shiozu continued to leap ahead by playing more and more lands. Mori used his second Fact or Fiction to get access to a broad selection of cards, turning over Swamp, Restock, Fertile Ground, Thornscape Battle Mage, and Gainsay. The piles were split into Restock and the swamp, and the Fertile Ground, Battlemage, and Gainsay in the other. Mori took the three-card pile.

At the end of the next turn, Mori played a Reviving Vapors, only to turn over three land. Mori picked the plains. He then took the opportunity to get close to matching the competitive mana lead that Shiozu enjoyed. Mori's Domain set was almost complete. An Addle met the fangs of the Mystic Snake, and the Snake slowly started delivering fresh beats to Shiozu's doorstep.

And then Shiozu found himself up the creek without a paddle. Mori played Overgrown Estate, much to the befuddlement of Shiozu. Shiozu Voided for 3 and failed to find anything. A Questing Phelddagrif was drafted into Mori's slowly building army, and when it was given pro-black and red to slip past the Nightscape Familiar, Shiozu had the temerity to Ice the purple adversary. 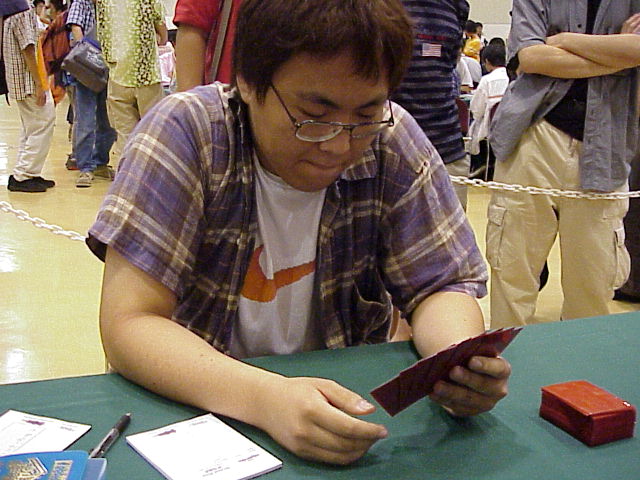 Mori could handle anything that Shiozu could dish out, however, and the game seemed to have slipped entirely out of Shiozu's grasp. A Void for 4 killed the green Hippo and Mystic Snake, but a Thornscape Battlemage remained to crash into Shiozu's Familiar. A Shiozu Fact Or Fiction then turned over an Obliterate which he took along with an island and Gainsay. Shiozu blew the world up, and started to return the land situation to normal. An Addle for Green took out Mori's Harrow, so Mori decided to settle for a Fertile Ground.

Shiozu's Agenda allowed him to try to Spite Elfhame Sanctuary, but Mori used a Snake to counter it. Shiozu continued to struggle with a Prophetic Bolt, but Mori still stood poised at 38 life. Shiozu Bolted again, dropping Mori down to 34. Shiozu knew he could blow up the world with a second Obliterate in his hand, but Mori wouldn't be hurt at all. In fact, Mori's life jumped to 45. Mori's Elfhame Sanctuary would protect him from the worst Shiozu could throw at him. After Mori dropped a Thornscape Battlemage, Shiozu scooped, realizing he was only wasting an opportunity to do better in game 3.

Shiozu removed the Obliterates he sideboarded in and added more Gainsays and Prophetic Bolts. With only 8 minutes on the clock, both players would have to play rapidly to avoid an undesirable draw. An Addle dismissed a Questing Phelddagrif from Mori's table, and the following turn Shiozu played a Shivan Zombie that started the beatdown. Mori attempted to Reviving Vapors but Shiozu Gainsayed. Mori tried to play a newly drawn Phelddagrif, but that too was Gainsayed.

Shiozu's pace turned mercuric as he sensed the advantage. To his credit, Mori kept his speed up despite his waning fortunes. Though his hand was full of counters, Mori was handicapped by being unable to counterspell twice in a turn. The Zombie, unimpeded by the Sunscape Familiar, dragged Mori into the graveyard in a furious rush. Shiozu beamed as he walked into the victor's lane with 2 minutes to spare.