Round 9: Schietkoe vs. The Unusual Suspects 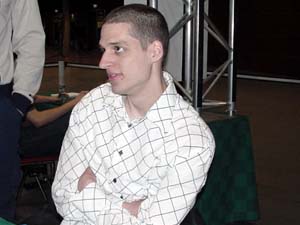 Schietkoe were the only team with a perfect record yesterday and currently top the rankings on 8-0. After the hiccup of a draw in round 3 German team The Unusual Suspects also ended the day unbeaten and now they slug it out to see who takes the lead.

In the draft The Unusual Suspects seemed to have a more focused plan and looked to gain a slight advantage in the draft over their Dutch counterparts. I picked perhaps the closest of the games in the seat A matchup between Stijn Cornelissen and the European champion from 2002 David Brucker. Cornelissen drafted a green-black deck while Brucker has a solid red-blue deck.

Brucker started with an Aether Spellbomb and followed it with a Neurok Spy while Cornelissen didn't have a play until a hasty Arcbound Hybrid zipped in on turn four. Brucker hit straight back with a Vulshok Berserker. Cornelissen added a second Arcbound monster, a Reclaimer and brought out a Disciple of the Vault to join it.

Brucker used the Spellbomb to bounce the Reclaimer before nipping in for 5 with the Berserker and Spy. A Neurok Prodigy came out to give Brucker a commanding advantage.

Cornelissen attacked back with the Hybrid and Disciple and strangely Brucker chose to block with the Prodigy, discarding a Lodestone Myr to return it to his hand. The Reclaimer was the beneficiary of the counters as the Hybrid headed to the graveyard. It was the only artefact creature remaining for Cornelissen and Brucker's plan became apparent as he removed the final arcbound creature with an Echoing Ruin. Cornelissen got back the Hybrid with the Reclaimer on the way out but was behind on the clock. An Echoing Truth sealed the game for Brucker a couple of turns later.

Over on the other tables Blech had taken an improbable 1-0 lead and there was an amusing situation where Tom van de Logt had to read what a Dross Scorpion did. Blech's deck hadn't quite come together. With Dirk Hein 1-0 up the Unusual Suspects looked to be in a commanding position.

Back in the seat A matchup both players had to mulligan, but it was Stijn who looked to come out the stronger with a Tel-Jihad Exile and a busty turn 4 Tangle Golem.

Cornelissen zipped in with an Arcbound Hybrid, forcing Brucker to pop the Spellbomb to send the Tangle Golem back. Stuck on three land with only a Hoversail and Granite Shard the German player summoned a Psychic Membrane to try and slow down the beats.

Cornelissen went straight through it with a Predator's Strike. The extra card did allow Brucker to find a fourth land and he summoned a large Quicksilver Behemoth. The Behemoth and Tangle Golem traded in battle but Brucker was now down to 6 life because of the Wolf and Hybrid. He made a Neurok Spy and threw it in the way of the Wolf.

A Rebuking Ceremony from Cornelissen looked to put the German player in serious trouble, but Brucker had a Lodestone Myr in hand and was able to finally keep the Hybrid at bay. His problems were not over as Cornelissen made a Soul Foundry and imprinted a Tangle Spider on it.

Brucker took the offence back to the Dutch player as he threw in a Berserker that traded with the Hybrid. He followed up with a Quicksilver Elemental and suddenly the game looked interesting.

Cornelissen was at 16 life, Brucker hanging on with just 4.

Brucker sent in the Quicksilver Elemental and then there was a pause as Cornelissen wanted to ask a judge a question before he made a decision. He made a second Spider and put both in the way of the Elemental. The Elemental borrowed the abilities of the Lodestone Myr and was able to survive the attack and kill a Spider. Brucker had to tap his only remaining blocker , a Lodestone Myr, to do this. Unfortunately for him Cornelissen had an Echoing Courage and was able to fully exploit the opening as the remaining Spider came in for lethal damage.

Brucker put up shields early with a Psychic Membrane while Cornelissen had to content himself with one of the multiple Dross Prowlers the Dutch ended up with. A Granite Shade sent it straight to the graveyard and Brucker followed that with a Quicksilver Elemental.

Cornelissen had only a Whispersilk Cloak.

Reinhard Blech managed to put up a fight with his weaker deck but went down to Tom van de Logt 2-1.

With the match status now tied at one each this would be the decisive game.

Cornelissen made a Soul Foundry and imprinted a Disciple of the Vault, but it would only really keep the Shard occupied. Brucker kept attacking with the Elemental and backed it up with a Prodigy. The threat of a Tangle Spider kept that at home but a Lodestone Myr meant the Elemental could keep attacking. 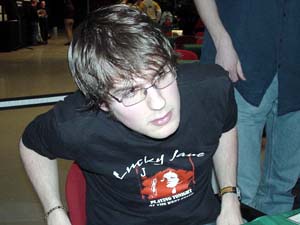 Cornelissen tried to shore up with a Rebuking Ceremony but was on the back foot. The Spider put on a Whispersilk Cloak but couldn't stop the Elemental coming in for five to leave the Dutch player at 8 life. He summoned a Malachite Golem and managed to trade it with the Myr.

Brucker still had plenty of gas, a Neurok Spy showed up to add to Cornelissen's woes. The next turn a Berserker crashed in. Cornelissen activated a Stalking Stones and saved it with a Predator's Strike. Once the dust settled Brucker had lost a Quicksilver Elemental and the Berserker but Cornelissen was at 4 life.

Time was called but the extra turns were not necessary. Brucker pinged Cornelissen at end of turn with the Shard, attacked with the unblockable Spy and then pinged him again with the Shard to finish him off.