Six years ago, Makihito Mihara defeated Paulo Vitor Damo da Rosa in the Top 8 of the World Championships with his Dragonstorm combo deck. Despite that defeat, Damo da Rosa has since greatly impressed the Magic world, earning a resounding induction to the Hall of Fame earlier this weekend.

Mihara was not overly confident of his draft deck. "No bombs," he lamented. His team of Selesnya beaters looked consistent enough, so his plan would be pretty straight-forward: play creatures every turn from turn two onward, and push them through any disagreements with his various combat tricks.

Damo da Rosa's deck did have bombs, but might be a little less consistent, as he was splashing for two Explosive Impacts and an Annihilating Fire. Between those and his Supreme Verdict, Damo da Rosa would be looking to dominate the long game, but would have to do so with much fewer creatures than Mihara. Mihara would most likely have to hope for Damo da Rosa to stumble if he wished to come out on top, this time. 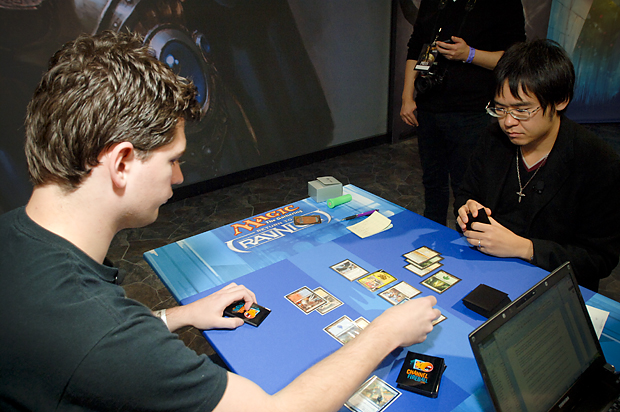 Makihito Mihara's Selesnya army was consistent, but would it be enough to break through Paulo Vitor Damo da Rosa's Azorius deck, backed up with some explosive tricks?

Mihara won the die roll, and led off with a Sunspire Griffin to fly over Damo da Rosa's Doorkeeper. Damo da Rosa Syncopated Mihara's Selesnya Keyrune before summoning an Armory Guard. Mihara had no turn five play, but still managed to drop Damo da Rosa to 16 in the air.

Damo da Rosa considered Mihara's five untapped lands, but went for it anyway, suiting his Armory Guard up with a Knightly Valor. Mihara had nothing, and the Guard evened up the scores at 16 apiece.

Mihara attacked back for 2 and dropped a Seller of Songbirds. Damo da Rosa attacked Mihara to 12, his Knight Token trading with Mihara's Bird Token. 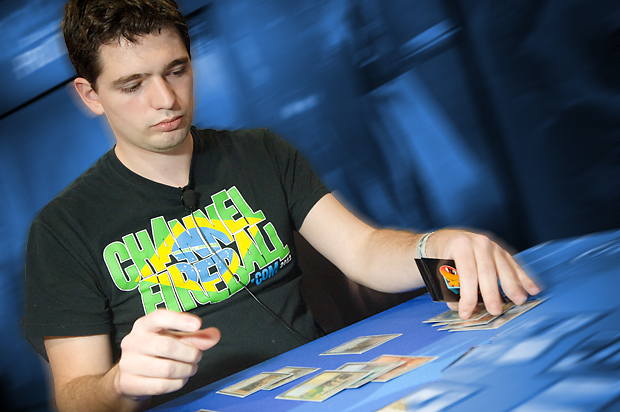 Hall of Fame member Damo da Rosa is on guard and also ready to brawl.

The 4/7 Armory Guard has doing an excellent job of outracing Mihara's Griffin, and an end of turn Explosive Impact followed by an Azorius Justiciar put away game 1.

Mihara began game 2 a little better than the first with a Keening Apparition, followed by a Seller of Songbirds, while Damo da Rosa just played tapped lands and a turn three Tower Drake.

Damo da Rosa bounced the Longlegs with a Voidwielder, but Mihara just recast it. Damo da Rosa had no play on turn seven, taking 5 from the Longlegs to fall to just 5 life. Mihara laid his cards on the table, literally, playing out the last two cards in hand, a pair of Sunspire Griffins. Damo da Rosa just nodded, and overloaded a Cyclonic Rift at the end of Mihara's turn, eliciting a chuckle from the Japanese player. 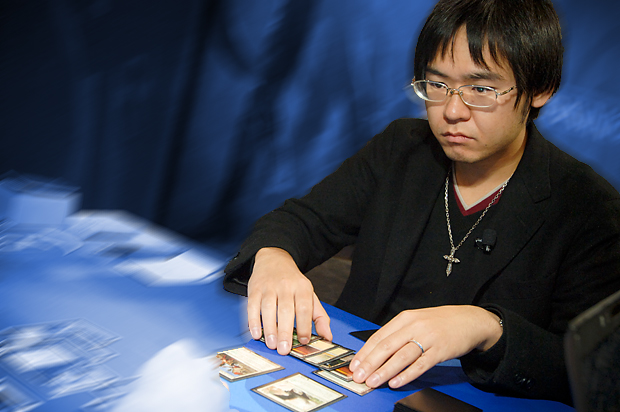 Mihara battles his way through some powerful Izzet effects.

Mihara slowly redeployed his team, while Damo da Rosa got started on the long road to evening up the life totals, slapping a Knightly Valor on a Skymark Roc. The Roc did a fine job of hindering Mihata's progress back into the game while taking chunks out of Mihara's life total.

When Mihara was finally able to attack with his Longlegs again, Damo da Rosa was ready to throw half of his team in front of it, losing only a single Tower Drake to take down the 5/4. Mihara replayed his second Sunspire Griffin after combat, giving him a pair of 2/3 Griffins, a Concordia Pegasus, and a Selesnya Keyrune. Mihara was now down to 10 life, to Damo da Rosa's 5.

Damo da Rosa's board was his 5/5 Skymark Roc, a 2/2 Knight Token, and the Voidwielder. He summoned an Azorius Justiciar, detaining a Griffin and the Pegasus, and dropped Mihara to 5.

Mihara summoned a Stonefare Crocodile and a Seller of Songbirds, and passed back the turn. Damo da Rosa simply untapped and pointed an Explosive Impact at Mihara to wrap things up.