Round 9: Simon Leung vs. Anatoli Lightfoot 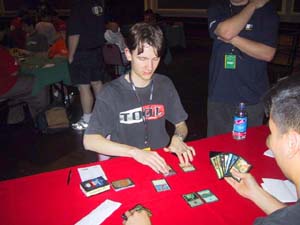 Both players had come off a win in round 8, with their pod (#7) being quite tough. A number of drafters, moved in and out of colors up until pack 11 - and only then did colors finally settle. The randomness of the draws could decide who goes 3-0 here.

Simon had decided to draw in the first game, but forced the tempo with a Crypt Creeper. Anatoli followed up with Cease-Fire on Simon's turn 3, almost an Abeyance. Simon swung for 2 and was done. Another turn was stalled, as Lightfoot's Chainflinger was the target of an Aether Burst back to his hand. Anatoli's Magma Vein was the turn 5 play - this in the end was the winning play. Leung came in for third time with the Creeper where Anatoli paused, and then let it through. He didn't vein in case Simon dropped another creature. That didn't happen so he killed the creeper in the end step. 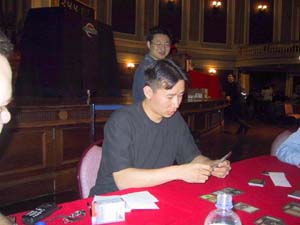 A lack of creatures on both sides saw Anatoli cast an Aven Flock, but tapped out of the all important white mana. In doing so it died next turn to a Morbid Hunger. At this point it seemed that all Simon was drawing was land. Things got worse as Anatoli was able to put out 2 creatures next turn in the form of a Tireless Tribe and the Chainflinger from earlier, to which he could only respond with a Nantuko elder. Anatoli attacked with the tribe - which was blocked by the elder, and saved by discarding. The Magma Vein took care of the elder. The Chainflinger really earned his keep after this by killing a Nantuko Mentor and a Fledgling Imp (he now had threshold). The only thing that Simon drew after that wasn't land, but a Deep Reconnasiance, which he flashed for good measure. Anatoli finished the game off with a double Flame Burst. 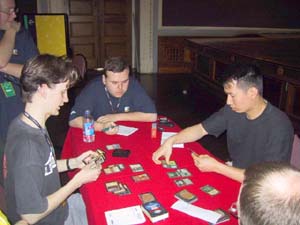 Again the Cease-fire was effective for Anatoli enabling him to drop a Mystic Zealot, followed by an Ember Beast against a crypt creeper and a Malevolent Awakening. The tempo was definitely with Anatoli as he pushed with the Zealot and the Ember Beast. Simon put his best foot forward with Stalking Bloodsucker - the massive 4/4 flier that gets bigger. It turned the direction of the game, with Anatoli having to play defensive for the first time. He managed to muster an Angelic wall but not before taking 3 hits from the airborne dreadnought (6 life). It didn't need to block however as it was removed with a Second Thoughts. Quick thinking let him sacrifice it to cycle a creature back from the graveyard (Crypt Creeper). Anatolis dreams came true as the Graceful Antelope sneaked through the lines of defense with the aid of a Shelter. With it being unblocked from there on in, it was only a matter of time before death, as the Ember Beast and the zealot tied up his mana with the Malevolent Awakening. A tireless tribe (a card that Anatoli had told me he felt was quite sub standard), enabled him to dump the remainder if his hand to gain threshold. That turn, with the aid of a Flame Burst, and the fact that the Zealot and Antelope were unblockable, he reduced Simons Life total to 0 and put Anatoli 2-0 for the pod.