Round 9:
Spies in the Skies

Hall of Fame member and long-time Pro Tour competitor Raphael Levy and platinum-level player Shahar Shenhar had already played yesterday during the Standard Constructed rounds, where Levy was able to emerge victorious. Now, the two face off once again. The format? Gatecrash Booster Draft. Would Shenhar be able to even the score? 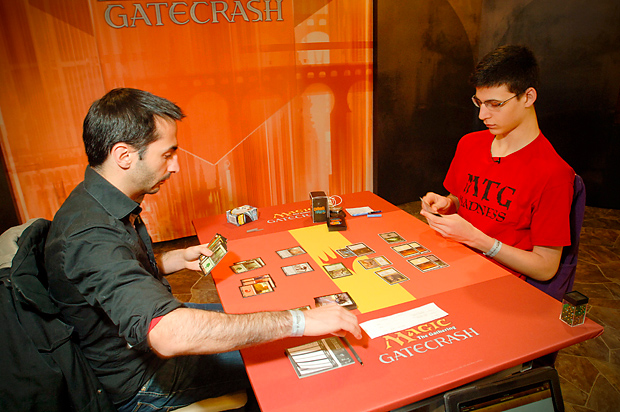 Raphael Levy and Shahar Shenhar face off for their second match of the weekend, with Shenhar looking to even the score.

"I'll play," Levy said jokingly when Shenhar rolled two ones to see if he'd go first. "You still have to roll," Shenhar said with a laugh, as Levy rolled a 6 on one die and chose to go first.

Levy made the first play of the game with Prophetic Prism, while Shenhar came out of the gates with Cartel Aristocrat, which attacked in on the next turn and was joined by Kingpin's Pet. Levy cast Millennial Gargoyle, and chose to not block the Aristocrat when it came in, going to 16. Balustrade Spy knocked a land off of Levy's deck, while the French Hall of Famer tapped out for Adaptive Snapjaw.

But when Shenhar put on the clock with a Shadow Slice ciphered onto the Spy, attacks from Shenhar quickly put Levy to 6, who was not ready to throw his Gargoyle in front of a flier just yet. The Snapjaw cracked in for 6, and Scorchwalker gave Levy another big attacker. Simic Charm bounced Shenhar's Spy back to his hand, but Shenhar replayed it on the next turn, extorting Levy to 5 with Kingpin's Pet, as the Aristocrat and Scorchwalker traded blows. 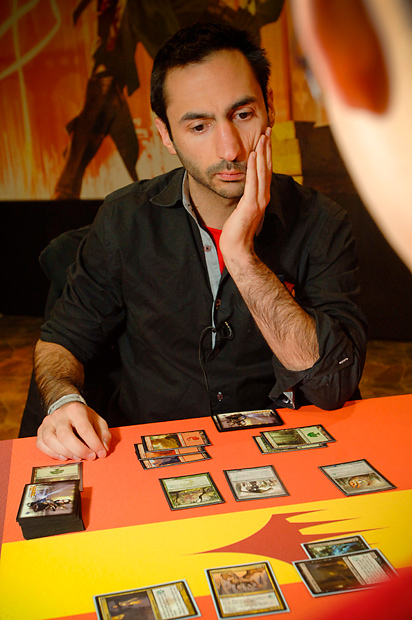 Levy is left with only a few points of life to play with in his first game against Shenhar.

Levy tapped out for Ruination Wurm, but lost his attacking Snapjaw to Smite after Shenhar blocked with his Kingpin's Pet. Devour Flesh caused Levy to sacrifice his Wurm for 6 life, unwilling to lose his Millennial Gargoyle to the removal spell. Shenhar ketp his Kingpin's Pet back, content with extorting Levy for the next few turns. Balustrade Spy attacked in, and was joined by another one as they began to take out chunks of life that Levy gained back from Shenhar's Devour Flesh. Levy, who had no answers to the fliers, cast Towering Thunderfist, hoping to find a moment to push through.

Levy went to 4 after an extorted Deathcult Rogue came down, but Levy wasn't done yet. He sent in his ground attacker, then played Hellraiser Goblin after attacks. When Shenhar sent in his team, Homing Lightning shot down the dual Spies, Millennial Gargoyle finally got to jump in front of Kingpin's Pet, and the Deathcult Rogue dropped Levy to 2.

When Levy's next card did not yield a 6 power creature to go with his Hellraiser Goblin, he scooped up his cards.

Shenhar was first to act again with Syndic of Tithes, but Levy was ready with Mugging for the Orzhov two drop. What Levy was not ready for, however, was stalling on lands, whiffing on his third turn land drop. Shenhar, meanwhile, rebuilt with Gutter Skulk.

Levy found a Simic Guildgate waiting on top for his fourth turn, giving him access to the colors he needed, while Shenhar added another rat to his board and attacked for 2. Viashino Shanktail from Levy, who was no longer hurting to his land drops, was dealt with via Devour Flesh, as Shenhar sent his team in. Disciple of the Old Ways gave Levy a way to hold back the two Gutter Skulks, as Shenhar deployed Kingpin's Pet to take to the skies. 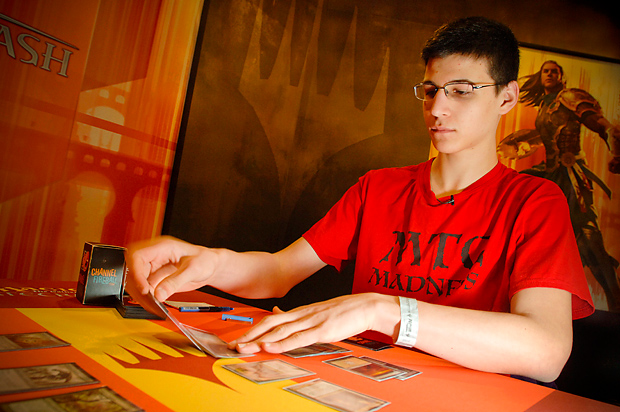 Shenhar is determined to take the fight to the skies.

Levy had a second Mugging to take out the Kingpin's Pet, but Shenhar simply replaced it with Assault Griffin. Levy's Homing Lighting shot the bird out of the sky on the next turn, but Shenhar replaced that flier with a new Kingpin's Pet. Levy, now out of removal for the moment, cast Slaughterhorn and passed with the Disciple still on defense.

With the coast finally clear, the Kingpin's Pet started its attacks. Deathcult Rogue let Shenhar extort Levy to 12. The Hall of Famer cast another Disciple of the Old Ways, but he was staring down a three turn clock.

That clock quickly went up a turn as Screeching Bat joined the team (with Shenhar extorting for a point), as the Kingpin's Pet and Deathcult Rogue sent Levy to 7. Levy, out of options, sent in his team. When Shenhar didn't block and had a Cartel Aristocrat for two points of extort, Levy offered the handshake.