Round 9: Stick to Your Sideboard

These two Japanese legends are paired together right on the bubble in this round, with the loser knowing that it would spell the end of their run in Pro Tour-Valencia. Kenji had struggled throughout the rounds with the 'No-Stick' deck that had been chosen by a select few of the top players, but it had already led Bernardo Da Costa Cabral to defeat. Two-time Pro Tour Top-8er Tsuyoshi Ikeda, meanwhile, was making the most of the Japanese love for gadgets with his Affinity deck of artifacts of all shapes and colors. Well, grey mostly.

Kenji won the dice roll and began with a Chrome Mox (pitching Thirst For Knowledge)and a Sensei's Divining Top, but no land! Ikeda showed his intentions with a Vault of Whispers and a Chromatic Star. Kenji had to use the Divining Top to find land on his second turn, but burst decisively into action on Tsuyoshi Ikeda's next turn as he used a Spell Snare to make the inbound Arcbound Ravager into an outbound Ravager. Taking his next turn Kenji showed exactly what had made him not want to mulligan away his no-land starting hand as he laid down the dreaded Isochron Scepter and imprinted it with an Orim's Chant, a play that was met with an appreciative groan from Ikeda. 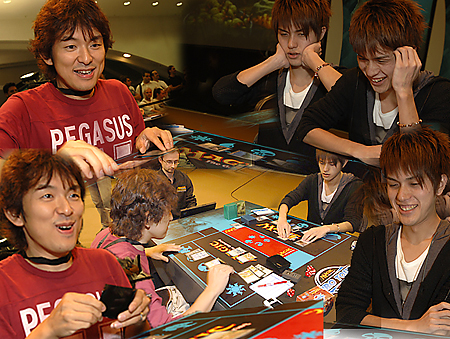 Two men enter, one man leaves...with his hopes of a Sunday spot still alive.The artifact deck played very few instants, so Tsuyoshi Ikeda realistically had only the one turn to make a difference to the game before that Sceptre became a lock for his. A Seat of the Synod and Chromatic Star gave him the four artifacts he needed to drop a free Frogmite, although with Orim's Chant about to take away attack phases that was unlikely to make much difference, and he frantically dug for cards by sacrificing both his Chromatic Stars, but couldn't find anything to help. As Kenji untapped and his Isochron Scepter hummed into life, Ikeda was left with very few hopes of success short of his deck being kind enough to serve up a run of Shrapnel Blasts.

Both players understood this and they rattled through a dozen turns in just a couple of seconds to see what would happen, and while one Shrapnel Blast arrived to cut Kenji to 14 life, Ikeda finally handed in his chips and conceded defeat. He turned to his sideboard to find something that would get him back into the match, and back into this Pro Tour.

Before sideboarding, the Affinity deck has very little to worry from No Stick, other than a very rapid beatdown draw—and that had been Ikeda's undoing, but has he clutched his sideboard of Pithing Needles and Ancient Grudges he will undoubtedly feel a little more confidence for the rematch. But despite the fact that he was staring an early exit from this Pro Tour directly in the face both players were in good humor as they shuffled up for Round 2. At least I think they were in good humor, as I don't speak Japanese, but if they were insulting each other's mothers they were at least smiling about it, so I'm willing to bet that they weren't.

Tsuyoshi began his comeback with a more aggressive opening of an Arcbound Worker, and followed it up on the second turn with the dreaded Arcbound Ravager—and Ikeda was so expectant of a Spell Snare that he instinctively cast it into his graveyard, and was pleasantly surprised to see his MVP being allowed to hit play. Meanwhile Kenji was concentrating on building his mana with an Island and a Chrome Mox (pitching the fearsome Tombstalker) and passed the turn straight back to Ikeda. And Ikeda wasted little time in upping the pressure on his opponent by playing a Cranial Plating and swinging in with his two Arcbound Guys. The Cranial Plating was Tsuyoshi Ikeda's way of asking Kenji Tsumura quite pointedly if he had a Damnation—if another turn came around without something taking away the artifact offense then the game would surely be over. Kenji obliged with his Damnation, but it was costly as the only way he could get to the second black mana was to remove another Tombstalker from the game to play Chrome Mox, and he followed it up with a Sensei's Divining Top.

With the life at 14-20 the board was clear of guys, but Ikeda had plenty of cards left in hand to mount a second assault, and play became fast and furious between the pair as they entered a decisive stage for control of the game. Ikeda dropped a Pithing Needle and used it shut down Kenji's Divining Top, and threw in a free Frogmite to which he immediately attached the Cranial Plating. With his back against the wall and few cards in hand Kenji had to use his second Damnation, but Ikeda came straight back at him with an Arcbound Ravager. Out of options, Kenji threw down his Isochron Scepter and imprinted the Orim's Chant on it, but it barely grazed the play area as Ikeda's sideboarded Ancient Grudge immediately turned it into kindling and he followed up by swinging the Ravager for 8, leaving Kenji bruised and bloodied, out of cards, and needing an answer from the top of his deck.

Unfortunately Island is only the answer to "What is a body of land surrounded by water," and not to "What stops me dying next turn to an angry Arcbound Ravager" and both players were heading into a decisive Game 3.

And it looked as though Tsuyoshi Ikeda began Game 3 just as he had finished Game 2, and he started out with a Pithing Needle, naming Isochron Scepter. His attempt to play a Frogmite to begin his offense on turn two was turned away with a good old-fashioned Counterspell from Kenji but it hardly slowed Ikeda up by a heartbeat and he played his second Frogmite instead.

For his part it looked as though Kenji was fighting for every life point in this deciding game and he threw out a Ghastly Demise at the Frogmite to again clear the board. But it wouldn't remain clear and threats continued to pour from Ikeda's Affinity deck as the Frogmite was replaced by an Arcbound Ravager, and while Kenji was able to put down his Isochron Scepter and Orim's Chant his stick was impotent—entirely nullified by Ikeda's first-turn sideboarded Pithing Needle.

And Ikeda was smelling blood, a pair of Cabal Therapies tore through Kenji's hand taking out an Engineered Explosives and then a Damnation. Once again Tsuyoshi Ikeda had managed to push Kenji right back to the ropes and leave him out of cards with his beloved Isochron Scepter nullified! He was looking for finish as quickly as he could before an answer for the Pithing Needle can be found and dropped a pair of Arcbound Workers, activated his Blinkmoth Nexus, and began to attack his compatriot as quickly and as hard as he could, dropping Kenji to 9 life. On his own turn Kenji had to drop even further to play his topdecked Damnation by laying a Ghostly Tomb untapped, leaving him at a precious little 7 life.

Tsuyoshi Ikeda wasn't finished yet, and starting attacking with his Blinkmoth Nexus that an Arcbound token had turned into a 2/2. Kenji Tsumura dropped down to 5 life... to 3 life... his lsochron Sceptre still locked out of the game and the top of library providing no answers. Ikeda cast a Frogmite to leave Kenji having to topdeck to survive in the Pro Tour - he pulled an Orim's Chant to buy a turn, but next turn could only pull a land and that made it game, set, and match to Tsuyoshi Ikeda!

Looking back, what doomed Kenji was exactly what had persuaded so many players not to play the No-Stick deck— there were simply too many good sideboard cards against it. If these two had been playing three Game 1s, then it would have been 3-0 to Kenji, as he got his Sceptr/Chant lock in all three games, but in reality Games 2 and 3 were won by the cards that Tsuyoshi Ikeda had sideboarded in to deal with the Isochron Sceptr. Perhaps the true result was "Kenji's Maindeck 1 - 2 Tsuyosihi's Sideboard", but regardless of how it was done, it will be Tsuyoshi Ikeda's affinity for artifacts that we will be continuing on in this Pro Tour.