Round 9: Taking the Loss 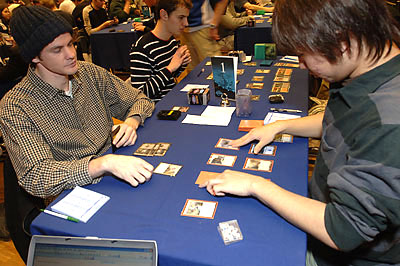 Mike Hron and Takuya Osawa are both undefeated heading into this round.oming into this round, Takuya Osawa is the last player with a perfect record (9-0), but two other players are undefeated with a draw at 8-0-1. Sebastian Thaler is one of those players, and Osawa's opponent Mike Hron of the U.S. is the other. Depending on how things play out, either of these players could potentially lead the standings as king of the hill after this match.

Osawa was the player going first, and while he kept his opening hand he seemed to be having serious problems. Benalish Cavalry was great for turn two, but he didn't cast anything else until a Veiling Oddity on turn six. Hron did a nice little demo on the dangers of falling behind too far on tempo in this format, playing Pit Keeper, Sinew Sliver, Saltfield Recluse, Spitting Sliver, and then Pulmonic Sliver against his sputtering opponent. Down to 10 life and dropping fast, Osawa held on for only two more turns before it was all over. He had an Ixidron in hand but hadn't found a second blue before perishing.

Osawa's troubles continued with this one as he had to take a mulligan. Though he got stuck at three land for a bit, this time he did manage to put out a nice string of creatures: Knight of the Holy Nimbus, two morphs, Benalish Cavalry, and a suspended Ivory Giant, and then a Sage of Epityr to finally find those crucial fourth and fifth lands. Meanwhile, Hron was the slower player this time, not getting out any creatures until a fifth turn Pulmonic Sliver, though he was able to use a Tendrils the previous turn to off what turned out to be a Shaper Parasite.

Having his opponent down to 13 life, Osawa was now only able to swing in with his Knight of the Holy Nimbus. From here the game began to swing back a bit as Hron started flooding the table with Slivers. A few turns later he had Pulmonic, Vampiric, Sinew, and Spitting Sliver in play, a 14-power flying first strike armada, and a table position that finally meant he could start getting some attacks in as well, threatening a lethal alpha strike perhaps just a turn later. Facing an Ivory Giant about to come in, he decided to just swing in with the non-white Slivers, dropping Osawa to 8 and adding an Aven Riftwatcher to his formidable air force. 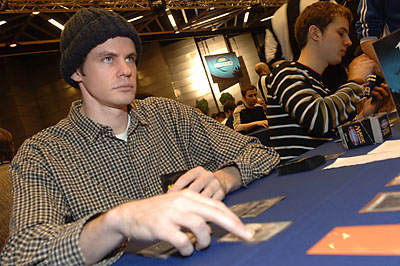 In came the Ivory Giant, followed by a badly needed Ixidron for Osawa. Hron had a Tendrils in response to wipe a Fathom Seer out before it would get to flip back down and threaten drawing even more cards, but trading all his slivers for bad morphs meant the board was back to even.

Untapping, Hron could only shake his head a bit. With nine morphs in play plus the Ixidron, in the end Hron decided to send all five of his into the red zone. Two got through, a Tendrils finished off Ixidron, and now it was each player with two morphs and a life race of 17-4 in favor of Hron. Osawa got right back in it, however, playing Cavalry Master and then Watcher Sliver. Hron was out of gas and his 2/2s were outclassed by Osawa's reinforcements. Making sure to always leave enough defense back to keep himself alive, Osawa continued pressing the attack while Hron continued to draw nothing of use to get himself back into the game. On his final turn with any chance, his deck coughed up a useless Mindstab, but Hron made the right play of casting it before conceding so he could get the chance to possibly see some cards he hadn't been aware of yet. Nothing useful was revealed, however, and Hron conceded the following attack phase.

This game began much more evenly than the previous two. Hron had a turn-one Mindstab to suspend but nothing else until turn four, while Osawa had a Benalish Cavalry and two morphs… Aven Riftwatcher joined the team for Hron, and then Mindstab tore Erratic Mutation, Synchronous Sliver, and Celestial Crusader from Osawa's hand. Hron added Saltfield Recluse to his defensive posture, but the troublesome Cavalry Master came down for Osawa.

Throughout this, Hron had been taking damage in 2-point shots from Benalish Cavalry. Worried about the first morph, he pointed a Dark Withering at the face-down foe, which turned out to be a somewhat disappointing Slipstream Serpent. Morph #2 flipped over next to reveal Shaper Parasite, sending the Saltfield Recluse to the dumper in the process. Witch Hunter promised to make things interesting from Hron's side, but then Ixidron came back down, resetting the board for the second time in the match. Hron had a Tendrils to stop the Parasite from flipping down, but the Cavalry Master he'd bounced earlier with Witch Hunter rejoined the party. Hron had a Temporal Isolation to shut it down, but he seemed to be out of answers when Ovinomancer came down next and threatened to shred his position.

Needing to get something going, Hron went on offense, and a couple turns later we were down to a morph and the Ovinomancer for Osawa vs. a sheep token and Doomsayer for Hron (plus a Riftwatcher with one counter left). It was Hron 13, Osawa 16, but the position was worse than the life totals might indicate, as Osawa had more than enough land in play to easily keep using and replaying Ovinomancer. A few turns later it was Hron 10, Osawa 11 and the table was Pulmonic and Mindlash Sliver for Hron (plus a sheep) against Watcher Sliver, Saltfield Recluse, and a morph for Osawa. 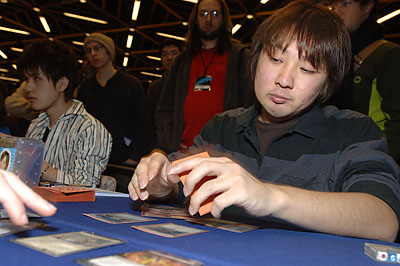 Weighing his options a bit, Osawa decided to send in his Watcher Sliver, morph, and the Saltfield Recluse, which looked pretty fishy (for a human). Mindlash and Pulmonic ganged up on the Saltfield, but Osawa had an Ovinize to shut the block down. Pulmonic was sacrificed to the top of the library using the Mindlash Sliver's ability to sac it in response to Ovinize, but then an Erratic Mutation hit the Mindlash Sliver, revealing a Temporal Eddy and clearing off the rest of Hron's board minus a lonely sheep token.

Hron gave it one more try, playing his Pulmonic Sliver back out next turn, but that got shut down by Temporal Isolation, and just like that, Osawa had put the game and match away.

Now at a commanding 10-0, Osawa quickly packed up and headed out of the area as Hron chatted a bit with some of the spectators he knew who'd watched much of the long match. Shaking his head a bit, Hron said that he should have won Game 2. He could have set himself up to win with his Sliver horde in the air a turn earlier, but he had played it a bit safe by setting things up to take one turn longer, playing around other cards but then walking into Ixidron in the process. And, as he pointed out, he knew there had been at least one in their draft.

Pointing out some of the questionable choices Osawa had made in the match (keeping Watcher Sliver in, for example) a friend consoled Hron that at least he hadn't been outplayed, but Hron generously replied right back that he hadn't played as well as he could have and that the match was his to lose by not putting Game 2 away when he could have. It was a quick and otherwise throwaway exchange, but it was also more than that. It's exactly that kind of attitude that gets players to the top. Shrugging off a loss to luck is both easy and dangerous. Taking the loss and knowing what you could have done differently to change the outcome is the real key. I haven't seen Hron play much so far, but watching him in this match and particularly how he was looking at the match afterwards, I'm sure we'll see much more of this talented player in the future.