Round 9: Thomas Rosholm vs. Bram Snepvangers 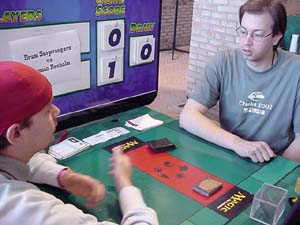 As we already know, Thomas has a solid black-blue deck splashing white with bombs as Cabal Patriarch and Dusk Imp. Bram is playing green-white. He also has some nice cards like Pianna and Beast Attack.

Thomas started but played only lands for the first couple of turns. Bram could come out with Rootwalla and a Werebear before Thomas countered with a Dusk Imp. Bram thanked him by sending his guys over for another two points of damage before he summoned a Krosan Avenger. When Thomas first attacked with the Imp, he could also bring in Teroh's Faithful, bringing him back to 21.

Now Bram didn't look so smug anymore. He just played a land and a Pianna on his turn, passing it right back to Thomas. Thomas is a really friendly guy and on his turn he just played a land and a Desire on Pianna. He also sent his Dusk Imp into the red zone. Things weren't looking good for Bram. It got even worse – he was left with nothing to play.

Being short on lands, Thomas just attacked with the Imp and played the Hypnotist. Bram answered right back with an Aven Cloudchaser. Now you might think there would follow a stand off or something. But Thomas wanted nothing of the kind so on his turn he dropped his sixth land and the Patriarch aka the "I win dude". Bram just shrugged his shoulders and attacked with his Aven, which Thomas took, and then played a Leaf Dancer. Thomas Peeked to find Bram's Seton's Scout, Shelter and Second Thoughts. He then played a Gravegouger, which he sacrificed to the Hypnotist - so Bram had to discard two cards. Bram discards Second Thoughts and Seton's Scout.

Then it was Bram's turn. Again he attacked with the Aven but this time Thomas blocked it with his Imp. They put damage on the stack and Thomas sacrificed his Imp to kill the Avenger. Bram saved his Aven with Shelter. On Thomas turn he just removed the Imp and the Gravegouger to kill the Aven and the Werebear. But Bram went to threshold by playing Pay no Heed on the Patriarch. Thomas just looked cool and passed the turn.

When Bram drew his card he could tell he wasn't winning this game. So he takes the easy way out by showing the card to Thomas and saying that it should be in his sideboard and not in his deck. They called a judge and went on to game number two.

Thomas started the second game and did it in style by taking a mulligan. He played lands and a turn two compulsion. Bram played Rootwalla and hit Thomas for three on his second turn.

Thomas uses his Compulsion to find a Swamp, which allowed him to play a turn four Faceless Butcher on the Rootwalla. That left Bram with a Leaf Dancer. Bram then played an Aven Cloudchaser to destroy the Compulsion but Thomas killed it with Desire and hit Bram with the Butcher. Bram fought back with Leaf Dancer and played Pianna. Thomas played Teroh's Faithful and struck with the Butcher. Bram didn't seem to care as he again just hit back and played a Mystic Visionary.

Thomas was stalling on lands but finally put down an Aquamoeba and attacked with the Butcher. Everything seemed to be going Bram's way as he sent al his guys into combat and attacked, bringing Thomas down to nine. Another Aven Cloudchaser hit play. Thomas just played an Island on his turn and passed. Bram attacked again with a Hypochondria, but Thomas blocked with everything he's got, which meant Bram got his Rootwalla back. Thomas was on three when he put his cards in a pile and started shuffling at his turn. 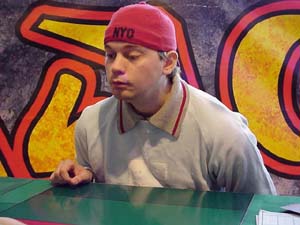 Thomas didn't sideboard but Bram put a Cease Fire in.

As Bram's deck is pretty aggressive, Thomas chose to play first. He kept a three-land hand but didn't see any more lands for quite some time. He killed Bram's first creature with an Innocent Blood. Thomas played a Dusk Imp, while Bram played several good spells like Avenger and Acorn Harvest. He attacked and played an Aven, again.

Thomas played a Plains, the only one in his deck. He might have wished for an Island. At least now he could play his Faithful. Bram just kept attacking with the Aven. Thomas blocked but Bram had Pay no Heed. Then he Flashbacked the Harvest and played Rites of Spring for one to get his third forest...

Thomas drew another Swamp and played Hypnotist to which Bram replied with Beast Attack. Thomas looked a little blue and Bram tried to cheer him up by attacking with his Beast token. It didn't work. Thomas didn't look any happier. On his turn Thomas played Afflict on the Avenger and drew another Swamp. Bram Flashbacked his Beast Attack and attacked with all his small green men.

Thomas blocked two Squirrels but it didn't matter as Bram played Chatter twice. Thomas had to pack it up.