Round 9: Tiago Chan vs. Alex Shvartsman 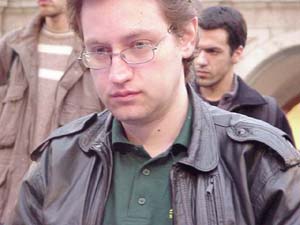 This is what you get if you make it through day one without a scratch: a nice feature match early on Sunday morning while you are still sleepy. We got a bit of a SuperGrow mirror match going on here amongst the king of Grand Prix Top 8's and one of Portugal's best players (fresh of his first second day finish in a Pro Tour).

Chan's Land Grant gave us a peek of two Dazes, Force Of Will, Sleight Of Hand and Mystic Enforcer, and him a Tropical Island to go along with a Tundra. The Sleight gave him a second Land Grant, which netted another Tropical Island.

Alex then pushed the envelope with a Quirion Dryad, which made it into play after two Dazes. Another Dryad promptly showed up to match it and Alex got his Meddling Mage Dazed. The Dryads traded and Chan got the chance to play another creature.

His Mongrel got a smile and a "sure" from the American. A MegaBear, still small albeit working on it, was the best Shvartsman could muster to stop the Math Dog. A Sleight and a Gush later the Bear got bigger a Meddling Mage joined it naming Mystic Enforcer.

The MegaBear started working on Chan's life totals. The Portuguese Gushed for more option, got the locked Enforcer along with a Swords, and was forced to burn for two. With the Mongrel and the Bear in a standstill Alex got the perfect card to keep on ticking: Merfolk Looter.

A second Mongrel joined the table and it seemed we would have to wait for either a very huge Dryad or a Mystic "Baby Dragon" Enforcer to smash through any of the defenses.

They both went about their card drawing schemes jockeying for position and looking for answers. Finally Chan blinked and tried to Sword the Pikula. With only Dazes and a Force in his hand Shvartsman had to let it go.

Tiago took the bait and tapped out for an Enforcer. Two Dazes later he had learned that tapping out can turn into quite a mess in this match up. The American untapped and dropped the elbow: Quirion Dryad and Meddling Mage, again locking the Enforcer.

The best the Portuguese could manage was a Winter Orb to slow down his tapped out opponent. That was not enough. A flurry of card drawing later a second Dryad came into play further sinking Tiago into trouble.

One Mongrel got Sworded and faced with the fast growing Dryads Chan picked up his cards.

A second turn, by Tiago, Legacy's Allure opened up the table. Alex got himself a nice Looter to dig up the goods, which Chan immediately stole before playing a Dryad.

Free of the Allure's threat Shvartsman played is own Dryad and tried to Sword the other Whip Lady. Chan Brainstormed and Dazed it. A second Allure gave the Portuguese more control over the table but despite having the biggest Dryad he held it back fearing perhaps a Gush from the American. 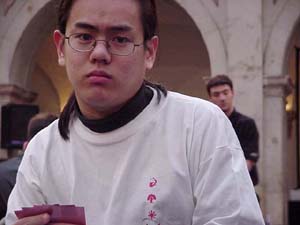 Two Sleights and a Gush later the tables had turned: the American's Dryad was ahead of the steroids race. To make way for that monster Alex Submerged the opposing Quirion Dryad and attacked for six before dropping MegaBear with five cards in the graveyard.

But the Portuguese wasn't about to take all of this lying down. He stole the Bear, reaching threshold, played a Mongrel and tried to Sword the remaining Dryad. A Foiled put a stop to that.

The Dryad brought Chan down to seven and Shvartsman played another Bear. With both players having Threshold the creatures were now huge. Chan dropped a Baby Dragon - Mystic Enforcer - which forced Shvartsman to take a few moments to rebuild his battle plan

Lets recap the table: Chan had a stolen Looter, stolen MegaBear and an Enforcer. Alex had a Dryad with seven counters and a MegaBear. The American played an Enforcer and the Portuguese was forced to chump the skyscraping Dryad.

They traded Enforcers and Chan played another one. Still the Dryad came in and this time Tiago threw everyone in front of the monster losing the Enforcer and Looter.

Down to one Bear each the game was now locked again. They traded them and Alex played a second one leaving the Portuguese two swings away from losing the game, and round. A Forced Gush, and a resolved Gush later the Bear put him out of his misery.