Round 9: Tomi Walamies vs. Svend Geertsen 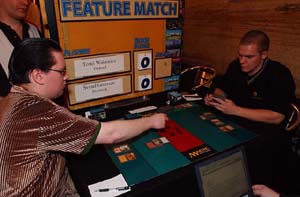 A pair of northern European powerhouses who have each worked their way up to the top of the standings ran into each other in a round 8 feature match. Danish superstar Svend Geertsen is the only person in the world who has competed in Magic's World Championships eight different times. He played '95 worlds at the age of 14 and plans to make this year's event in Berlin his ninth. Finland's Tomi Walamies has also been playing for many years and his 7-1 record has him in great shape to return to the Sunday stage. Before the match started both players commiserated about how cold the weather was back home and how nice it was here in Italy. One deck-check later they were ready to pit Walamies' Goblins versus Geertsen's green-white fatty deck.

Game 1 started with Geertsen running a clinic on misdirection. Geertsen played a morph on turn 3 and Walamies Shocked it immediately. Geertsen howled a disingenuous "no ..." and then revealed that it was just a Daru Sanctifier. Geeren then bustedout his main deck Pacifism technology and that was the end of Goblin Piledriver. Walamies calmly sacrificed the Piledriver for mana (Skirk Prospecter continues to impress this weekend) and down came Goblin Goon. That Goon put Geertsen under enough pressure that he couldn't wait to play his angel face-up and when he played it face-down it got 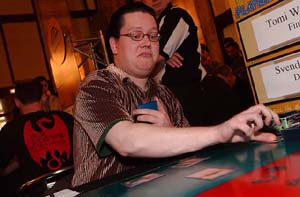 Incinerated. Geersen never did find an answer to that Goon and soon was packing up his cards and heading to his sideboard in preparation for game 2

Game 2 showed just how valuable the haste ability can be. Geertsen had three Pacifisms, but Walamies was able to get in a hit with Clickslither and then with Rorix before they started to feel all warm and fuzzy inside. Those hits put Geertsen low enough on life that every random goblin was a threat thanks to Walamies' Goblin Burrows. Geertsen did come up with an Exalted Angel, which forced Walamies to commit extra goblins to the board and build up Sparksmith to the point where it could shoot her out of the sky. That then opened up a window where Akroma's Venegeance would have been devastating, but Geertsen couldn't fine one and the Burrows meant that the Sparksmith beatdown was good enough to get the job done. 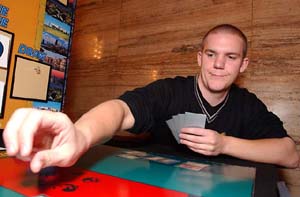 Several spectators gave high-fives to Walamies once he won the match. Walamies is universally regarded as a really good guy and a lot of PT regulars were disappointed to hear that he had fallen off the gravy train. Walamies himself has contemplated walking away from the game, but he had such a good time at the Magic Invitational that it seemed to reinvigorate him. Now that he's 8-1 and in great position to at least qualify for Yokohama and quite possibly for most of next season, he seems to be on top of the world and the tour is in little danger of losing one of it's most popular characters.