ike and Jon sat down at the table qualified on the backs of their Level 3 Pro status. Sonne, the more famous of the duo, was a member of the 2005 U.S. Nationals team. Josh Ravitz, on the other hand, was the benefactor of a fortunate teaming with Hall of Famer Jon Finkel. Finkel's auto-Q status as one of the game's true greats means Josh gets to play on Day 2 of this Pro Tour without ever sitting down at a PTQ.

Finkel and Ravitz quickly won the die roll, and while shuffling Sonne's, Finkel teased him with a card count of his deck.

Finkel: "Man, he didn't even respond. I'm just joking around." 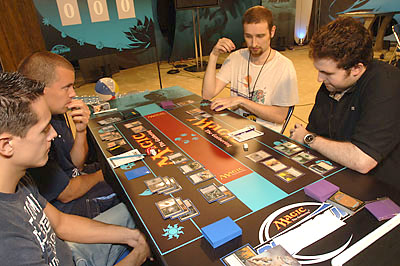 Jon Sonne and Mike Thompson aim to take Jon Finkel and Josh Ravitz down a peg.

On the play, both Josh and Jon decided they couldn't keep their opening sevens. They ship them back while Sonne and Mike whisper amongst themselves quietly. The reason? They had decided to toss their openers back as well, and had opted not to wait for their opponent's to finish before going through the motions.

Mike Thompson: "You guys don't mind, do you? It saves time and it's extra information for you…"

Ravitz keeps his new hand but Jon has to toss his back again, dropping to a six card opener. Sonne and Thompson were content with their new sevens, and the game got underway.

Things started relatively smoothly for both teams, with Finkel representing a blue-red deck while his teammate Josh was on green-white. Their first creature was a Sinew Sliver, however, indicating their decks weren't simply color archetypes but the Sliver archetype Chris Lachmann and Jacob van Lunen had made popular over the course of the weekend.

The other Jon was on two Mountains while his teammate Mike worked with two Swamps. A quick check revealed that Sonne had Islands to go with his Mountains while Thompson had Mountains to go with his Swamps, and they spent their turn developing their board position. By the time they passed, the table looked like this: Trespasser il-Vec, Thick-Skinned Goblin, and Rathi Trapper for Sonne/Thompson, Sinew Sliver for Finkel/Ravitz. Life totals were 29-28 in favor of Finkel/Ravitz, and a Blood Knight from Sonne was in the graveyard as a result of Erratic Mutation at the hands of the live-action Shadowmage Infiltrator.

As the turns developed, it started looking like Finkel and Ravitz were a bit land-screwed. Ravitz was stuck on three Forests and a Plains while Jon was struggling at just two Islands and a Mountain, still with no other permanents in play. Josh had managed to get a Sprout Swarm going to the tune of two tokens and had added a Gemhide Sliver to supplement his Sinew Sliver, going a long ways towards fixing his mana woes. Sonne and Thompson, on the other hand, had exploded. Their board featured Prodigal Pyromancer, Thick-Skinned Goblin, Faceless Devourer, Trespasser il-Vec, a Sliver of their own in Spitting Sliver, and the Rathi Trapper. They had also wasted no time in being aggressive in the red zone, dropping their opponents to 15 while remaining at 28 themselves.

A Foresee from Sonne threatened to push things even further in their favor, but it turned out to be only the second most powerful spell his team would play that turn. Thompson managed his sixth land drop of the game, a fifth Swamp that enabled him to tap out for Stronghold Overseer. Finkel and Ravitz remained stoic.

On their turn they discussed possible plays after Josh's Lymph Sliver was tapped during their upkeep. All the possibilities stood in Josh's hand, including Evolution Charm, Mwonvuli Acid-Moss, and Reflex Sliver. Jon indicated he wanted the Acid-Moss played, but Josh wasn't so sure. They went in the tank for a few minutes, and it began to become apparent the bad situation they were in was starting to wear. Making a final push for the Evolution Charm play, Josh was a bit surprised to find his teammate Finkel respond by scolding him with more than a bit of annoyance in his voice. Eventually Ravitz caved and played the land destruction spell, searching out a Forest and putting it into play while nuking Sonne's only Island.

On the other side of the table there was little unrest. Sonne and Thompson spent their turn figuring out which creatures they wanted to attack with and for how much. Eventually Stronghold Overseer, Faceless Devourer, and Trespasser il-Vec came in. Before blockers Thompson discarded a card to Trespasser, then activated the Overseer once to increase the damage clock. Finkel had the Gone portion of Dead // Gone to bounce the 5/5, and his team took 7. 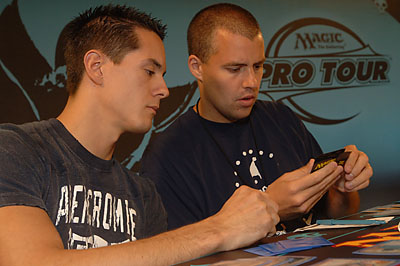 Sonne and Thompson sample the briny juices of the think tank.

Sonne and Thompson still weren't finished, however. Post-combat Thompson correctly remembered that his Spitting Sliver had the Gemhide Sliver's Birds of Paradise ability, giving him the extra mana he needed to re-play his Overseer. Sonne added a Flowstone Channeler and, at 8 life, Finkel and Ravitz drew their cards before offering the hand in defeat.

The players moved to head into their post-game process, picking up decks, dice, and notepads, but were stopped by judge James Elliot who asked to speak to Josh Ravitz. That didn't appear to make either Ravitz or Finkel pleased, both presumably jumping to the natural conclusion that the judge bore no good news, but the adjudicate gave no indication what the meeting was to be about. Sensing the tenseness descending on the feature match area, Sonne and Thompson quickly made an exit.

After a few minutes of discussion, the truth was revealed: Ravitz had failed to register a legal deck of 40 cards, instead listing only 39. The culprit was a New Benalia that Josh had forgotten to write down, and the resultant match point penalty made their loss sting even more.