Round 9: Vincent Shek vs. Sean Buckley 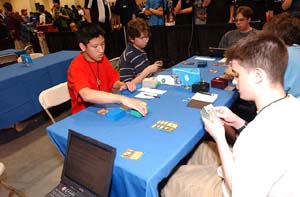 This match is pivotal. If Vincent wins, he has a chance at Top 8 tomorrow. If Sean wins, he may or may not make it in.

Vincent is from Toronto, and is here with a bunch of his friends. "Hi, Mom," he said before the match.

Sean is from Monroe, Connecticut. "I want to say hi to Chris and Ray, two of my friends from home." He qualified through one of the JSS challenges in Connecticut, and he's played in Regionals and in the Nationals grinders on Thursday. "I conceded in the Top 8 of one of the grinders so that Paul Reitzl could make Nationals."

Sean led with a Krosan Verge and Vincent countered with a Wooded Foothills of his own. He sacrificed it to find a Forest at the end of Sean's second turn. Vincent played a Wild Mongrel, the first creature of the game, as Sean played more and more land. Vincent's next creature, rather than a Lavamancer or an Elephant token from Call of the Herd, was an Anurid Brushhopper.

Sean cycled away Renewed Faith to go back to 20 life (he'd taken a couple of damage from a Brushland) and passed the turn back. Vincent played a Ravenous Baloth, and Sean finally cast a Wrath of God.

Vincent sacrificed his Baloth to gain four life, and discarded two cards to pull his Brushhopper out of play. He played another Baloth and passed the turn with two cards left in hand. Sean untapped and played no more lands, but another Wrath of God. Vincent sacrificed both the Brushhopper and the Baloth to gain more life and went to 30. He flashed back a Call of the Herd and passed the turn.

Sean was suffering from some serious mana problems, with only four lands in play (two forests, one plains, one Brushland). He played a morph creature face-down and passed the turn. When Vincent attacked, Sean declined to block and went to 7 life. Vincent played yet another Call of the Herd and passed the turn with two Elephants in play.

Sean attacked with his morph creature, which when unblocked, was revealed to be an Exalted Angel. He discarded Deep Analysis and passed the turn without playing another land, missing quite a few land drops in a row.

Vincent played and sacrificed a Wooded Foothills, getting a Mountain this time. He attacked with both Elephants, taking Sean down to 4 life. Vincent played a Living Wish, digging through his sideboard for an Intrepid Hero. He played the Hero and passed the turn.

Sean played a Plains – his fifth land of the game! He attacked with the Angel, bringing Vincent to 21. Sean played another Wrath of God, commenting, "I can't draw more than four lands this game!" Vincent, completely calm and cool, played a Glory on his next turn. 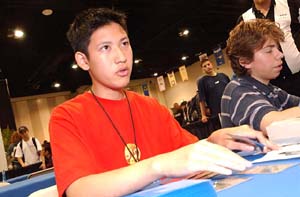 Sean played a face-down morph on his turn and passed to Vincent. Vincent played another Living Wish and hunted out an Anger, then played it. Sean unmorphed an Exalted Angel, then slammed down his first Island of the game. But he had no other plays this turn, and just passed to Vincent.

"Do you have Elephant Guide?" Sean asked Vincent. Vincent nodded and showed him the Guide in his hand, and Sean conceded.

Sean began with a Krosan Verge and Vincent opened with a forest and a Llanowar Elf. On his second turn, he played a Brushland and an Anurid Brushhopper. Sean played more non-basic lands to go with his first-turn Verge (two Skycloud Expanse), and then sacrificed the Verge to get a forest and a plains.

Sean's next play was a Mirari's Wake, as he nervously shuffled his cards back and forth. Vincent then played a Birds of Paradise and attacked with the Mongrel and Brushhopper, bringing Sean down to 13. Vincent cast a Living Wish, grabbing Genesis from his sideboard.

Sean played a Mirari on his turn. On the next turn, Vincent attacked with the Mongrel, the Brushhopper, and a Llanowar Elf, bringing Sean down to 6. At the end of Vincent's turn, Sean cast and copied Cunning Wish, Wishing for Moment's Peace and Renewed Faith. On his turn, Sean cast and copied Deep Analysis. He discarded a Counterspell at the end of his turn and passed to Vincent.
Vincent attacked with the Mongrel, the Elf, the Brushhopper, and the recently cast Genesis, and Sean played his Moment's Peace. "After damage is stacked?" Vincent asked, tapping his Birds of Paradise and a forest to cast Flaring Pain. 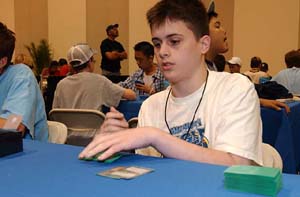 Sean then played an Exalted Angel and a Compulsion, with two mana floating. He cycled away an Island and passed the turn.

Vincent discarded Glory to pump his Wild Mongrel, then gave his entire team protection from white and swung with the same four creatures as the previous turn. Sean flashed back Moment's Peace, Vincent cast Flaring Pain, and Sean had another Memory Lapse. This time on his turn, Sean attacked for 5 with the Exalted Angel, bringing Vincent to 14.

On Sean's next turn, he played a Wrath of God, which Vincent let resolve in short order. He also flashed back a Deep Analysis and continued to cycle cards through his Compulsion.

Vincent tried to play two Wild Mongrels, but Sean countered them both. He then cycled through many, many lands with Compulsion, and passed the turn without finding anything else to put into play. Vincent played a Wild Mongrel and an Anurid Brushhopper, but Sean kept cycling through his deck with Compulsion.

Sean cycled away more and more cards with Compulsion, and some with just plain cycling (Renewed Faith), and then attacked with the Exalted Angel.

Vincent took the final turn of the game, playing a Birds of Paradise and a Wild Mongrel, and finished the game in a draw.