Round 9: Where Nomad Has Gone Before

The battle of the undefeated players was on. Guillaume Matignon of France would play against Dominic Konieczny of Poland. Both players are 8-0 after yesterday's five rounds of Zendikar Block Constructed and three rounds of Rise of the Eldrazi draft. Who would emerge as the victor and start Saturday as they ended Friday—undefeated?

Both players kept their opening seven-card hands. Guillaume's opening play of Bloodthrone Vampire seemed for the moment to be slightly outclassed by Dominic's Glory Seeker and Champion's Drake. That was, until Guillaume cast an Awakening Zone the following turn. Guillaume prompty reached into his bag and pulled out a fist full of Eldrazi Spawn. Hmm ... I wonder where this was headed. Dominic brought Guillaume down to 15 while he could, as the battlefield would soon be cluttered with 0/1s. Dominic added Makindi Griffin in an attempt to continue his assault by air. Guillaume increased his spawn count with Kozilek's Predator. His spawn count was now at 3 making the Vampire a potential 7/7. The Vampire went in unblocked sending Dominic to 19. Dominic counterattacked with his team of Glory Seeker, Champion's Drake and Makindi Griffin. Puncturing Light took care of the Predator that jumped in front of Glory Seeker and Guillaume fell to 12. Hedron-Field Purists hit the table for Dominic post combat. Guillaume spawned a fourth Spawn courtesy of Awakening Zone, then two more thanks to Dread Drone. 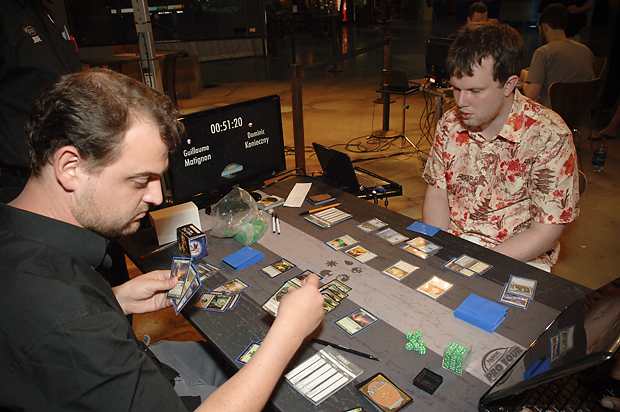 Guillaume Matignon and Dominic Konieczny are both undefeated, but only one of them will stay that way.

The Spawn count was at six, and Bloodthrone Vampire started looking a little scary. Guillaume attacked with the vampire but Dominic didn't feel it was time to start blocking yet. Guillaume had no effects and Dominic took 1, leaving him at a healthy 18. Dominic still had two flyers that would soar over the sea of Eldrazi Spawn dropping Guillaume to 9 life. Wall of Omens provided an extra card and a potential chump blocker if Bloodthrone Vampire threatened a lethal attack. Dominic's remaining mana was used to level the Purists to level 1. Last Kiss from Guillaume got rid of the Champion's Drake, bringing his life total up to 11, but had little else aside from casting a second Awakening Zone.

An attack from Makindi Griffin returned Guillaume to 9 life, and Dominic followed this up with Nomads' Assembly putting four Kor Soldier tokens onto battlefield and potentially seven more next turn if the board positions stayed as they were. Guillaume created two more Spawn tokens from the Awakening Zones, bringing the Spawn count up to eight. Now this Bloodthrone Vampire was a must-block. The vampire entered the red zone and was blocked by Wall of Omens. After some thought Guillaume decided to sacrifice two Spawn to destroy the Wall in combat. The remaining six Spawn, along with five land, were used to play Pathrazer of Ulamog. Nomads' Assembly rebounded to create seven more Kor Soldiers. Dominic looked to have plenty of creatures to block the giant Eldrazi for quite awhile, but when Dominic used Smite on the Pathrazer's first attack, Guillaume had decided it was time for the next game.

Guillaume cast a Nest Invader on turn two. Unfortunately he didn't play any other lands or spells this game. Dominic took advantage of his stymied opponent with two Knight of Cliffhaven on the second and third turns. After Dominic leveled both Knights to level 1, Guillaume extended his hand. Dominic moves on as the sole undefeated player in San Juan at 9-0.