Round 9: William Jensen vs. David Williams 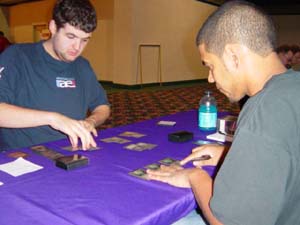 There's a lot of people rooting for William Jensen this weekend, more than usual. Jensen is playing a heavily-metagamed black-red mana-denial deck, aiming to punish a field dense with mono-black control.

He faces a pretty tough matchup in the resurgent Dave Williams and his version of the mono-black Pirates! deck that debuted at Grand Prix - London. Quick beatdown, Braids, Rancid Earth, Ichorid and Zombie Infestation are all trouble for Jensen's sorcery-based removal.

Williams kept a mediocre hand for Game 1. Jensen's had a lot more action. He Edicted Williams's Crypt Creeper then hammered down Rancid Earth and Earth Rift while Williams failed to develop his board. After missing a land drop, he drew, and played a third swamp.

"I don't know why I bother to mix it in. Obviously I'm drawing lands." - Dave Williams.

Jensen was ready with Rancid Earth to bust him back to two lands. Then Mirari hit play. What followed was an exercise in unfairness. Copied Wishes, Rifts, and Rancid Earths quickly left Williams permanentless and staring down a gigantic Magnivore.

"What was I thinking? I kept about the worst hand ever. That was like mulliganing to three." - Dave Williams 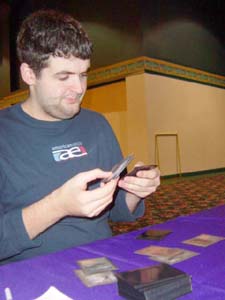 Williams curved out with a Cabal Therapy for Innocent Blood (seeing a hand of five land, Earth Rift and Diabolic Tutor), making sure the way was clear for his turn-two Millikin, turn-three Braids. Jensen was dismayed.

Pinned to two lands, he kept playing them out while Williams brought out Nantuko Shade to aid the beats. Burning Wish got Jensen Volcanic Spray, and he used it to axe the Millikin. Williams then tapped out for a second Shade. Jensen's eyebrows went up, but he just shrugged and wrecked Williams by flashing back the Spray.

"That thing Flashes back? Well, this is my inexperience." - Dave Williams

His egregious misplay went unpunished, however, as Jensen failed to find an answer for Braids, and she smashed him.

"I tried my best to give that one to you. I was doing stuff like that all day yesterday. I attacked into Moment's Peace, it was right there in the graveyard." - Dave Williams 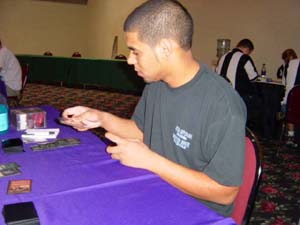 Jensen was delighted to play first. Williams was first on the board with Millikin. Jensen Pacted into Burning Wish and kept Williams in check with Rancid Earth. Williams busted out another Millikin, and Jensen hammered with Innocent Blood and another Earth.

Williams had plenty of action left. Cabal Therapy took care of the Burning Wish, and Crypt Creeper reused it, taking Skeletal Scrying and leaving Jensen with a Magnivore he coudln't cast. He pulled up Diabolic Tutor and cast it. Williams dropped Braids.

Rancid Earth took care of the Millikin thanks to threshold, but again Jensen was unable to answer the Cabal Minion. Williams took it slow, developing his mana by recursing Ichorid to pay the Braids upkeep. Soon the advantage was too much, and Jensen succumbed.

2 Screams of the Damned
51 Cards