Round 9: William Jensen vs. Steve Wolfman 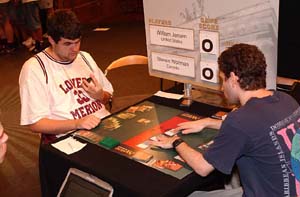 There are few drafters in the world who command as much respect as William Jensen does. The man they call Huey has long been considered one of the best in the business, but this season he's built his resume with a pair of Pro Tour Top 8's. Draft is his specialty, though, and even with a deck he considers sub-optimal he's managed a 2-0 record so far. Up against all that is the self-effacing Steve Wolfman, the Canadian best known as one-third of 2020, the team that had the honor of losing to Phoenix Foundation at Pro Tour – Boston. Wolfman's managed a tough road, dispatching both Brian Kibler and Dirk Baberowski on his way to face the big man, and he hopes his blue-red deck can pull out one more win.

Both players cycled on their second turn, and then they matched morphs. Jensen hit, but had nothing to do on his fourth turn except cycle Tranquil Thicket. Wolfman hit back and gummed the ground with Mistform Wall. Jensen swung in and bluffed a trick, but Wolfman blocked regardless. The creatures bounced off each other and Jensen made a Berserk Murlodont. Wolfman dispatched it with a Torrent of Fire.

Jensen made an Elvish Warrior and kept his team home. Wolfman came down with Lightning Rift, and Jensen cycled away a Spark Spray in response. Scattershot took care of Jensen's morph, and he played Break Asunder to get rid of the Rift. For a while they played draw-go. Wolfman found a Coast Watcher, which got a laugh out of the usually stoic Jensen. He played a morph, and Wolfman soon had two more.

Jensen seemed short on action. His morph charged and Wolfman put one of his in front of it. Jensen uncloaked Treespring Lorian, and Wolfman was all too happy to show him Master of the Veil. A Blade Sliver for Wolfman and he was finally on the offense, with Master, Wall (as Sliver) and the Watcher, dealing three. Jensen hoped to cut down the Blade Sliver with Crested Craghorn, but Skirk Marauder shot it down. Jensen drew another blank, and Wolfman's swarming attacks took him down. 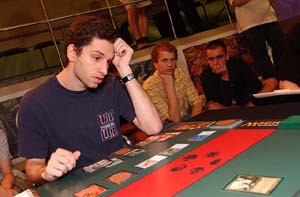 Jensen had a quality curve against Wolfman for Game 2. He hit Lightning Rift on the second turn, then followed up with Blade Sliver and Serpentine Basilisk. Wolfman meantime found a Rift of his own, and hoped that Mistform Wall would hold the ground. Crested Craghorn ensured it would not.

A Torrent of Fire from Wolfman finished the Blade Sliver thanks to Lightning Rift. Jensen continued to beat with Serpentine Basilisk. Wolfman bought a turn with Echo Tracer that died to a cycled Tranquil Thicket. The Basilisk came back down, and Wolfman finally got some offense from Skittish Valesk. He let the Basilisk beat him down to eight.

Unfortunately, he lost the flip, but swung in for two damage. He played a morph and passed it back. Wirewood Symbiote hit the table for Jensen and his invulnerable men brought Wolfman to four. He bounced his Savage to untap his Basilisk and tried replaying it. Wolfman had the Hindering Touch to shut it down. Wolfman untapped and flipped up Disruptive Pitmage to fuel Torrent of Fire, leaving just the 1/1's on the table. Jensen offered the trade, and Wolfman accepted.

Jensen made a man and passed it back. His was outclassed by Wolfman's Chartooth Cougar. He made another small man. Wolfman untapped and looked at Jensen "One card?" Jensen's reply was an abrupt "Yep." Wolfman swung in and dealt five with his Cougar before playing a second one. Jensen cycled Break Asunder to send two to Wolfman's dome, and earn the concession. 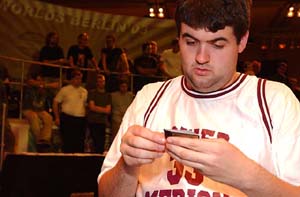 Jensen mulliganed his opening hand but stayed on his six. Wolfman's seven were slow. He made no play for the first four turns. Jensen cycled Break Asunder and thought his Serpentine Basilisk would fall to Hindering Touch, but it resolved. Wolfman finally got on the board with Covert Operative. Jensen cleared it out with Shock and played a morph.

However, Jensen's power faltered, while Wolfman started making Chartooth Cougars. Jensen had Symbiote and Timberwatch, but no other elves to power it up. He blunted The Wolf's attack for a turn and waited to draw some good cards. Wolfman turned on the beats with a second Cougar. He then added a morph, and Jensen decided it was time. He tapped all but one mana and pulled Insurrection out of his hand. Wolfman couldn't show him the Hindering Touch fast enough. With that, Jensen extended the hand.