Round 9: Zev Gurwitz vs. Justin Gary 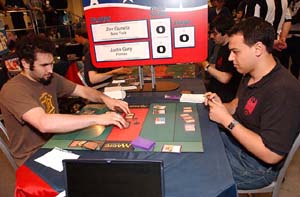 Zev Gurwitz is best known as the creator of Zevatog, although he's likely better at Limited than Constructed. He went 5-1 in the draft portion of Nationals two years ago, and his only money finish at a Pro Tour was 24th at Nice, which was Odyssey Booster Draft. He went 3-0 in yesterday's draft portion, and drafted a deck today that has everyone talking. Call to the Grave, Visara and Starstorm highlight it, along with many first pick quality commons. So far he's gone 2-0 with it, and all that stands between him and a perfect 6-0 record in draft on the weekend is Justin Gary, a Pro Tour Champion from this season. Gary is no stranger to Nationals success, and won this tournament back in 1997. Of course, this match features a Neutral Ground player against a Your Move Games member as well.

Both players started turn two with bears- Gary had Glory Seeker, and Gurwitz Withered Wretch. Gary attacked and Gurwitz did not bite, taking two damage. The Wretch swung back and Gurwitz summoned Flamewave Invoker. The Seeker attacked back, and the Invoker blocked and traded. Daru Stinger came out as a 4/4, and attacked on the following turn while Glory Seeker and Stoic Champion came out to protect the fort. Gurwitz's Wretch and morph attacked for four damage, and Vengeful Dead came out for defense.

Gary untapped, and after a moment of thought, attacked with his whole team. Gurwitz knew he had Gempalm Avenger in hand from the Stinger, and didn't block. Before combat damage, Gary cycled the Avenger and the Blessing to pump his team and Champion enough to win the game. 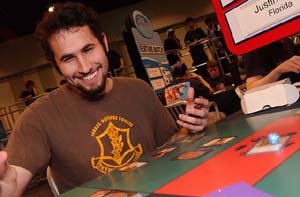 Gurwitz had a turn two Crypt Sliver, and Gary brought out Aven Farseer. There was no turn three play for Gurwitz, and Gary attacked for one damage with his Farseer, then summoned Mistform Dreamer. Crypt Sliver offered a trade with the Dreamer but Gary didn't bite, and Gurwitz played Goblin Clearcutter. Gary's air team came over for three while Gurwitz swung back with his Clearcutter, and said go sitting back on five lands, which signaled Starstorm. Gary didn't want to take the risk, and simply attacked with his creatures, then ended his turn.

Erratic Explosion targeted Mistform Dreamer, and Gary responded with Inspirit- Spark Spray was turned over, and the 2/1 survived. Once again, Gary attacked for three in the air and ended his turn, not willing to overextend. Gurwitz swung back, this time with his Sliver and well, and played a morph. Gary's counterattack brought Gurwitz to seven life points, while Gary was at nine. He found a creature he didn't mind putting out there in Stoic Champion, and ended his turn. Gurwitz attacked with the Clearcutter and morph, and the Champion blocked the face-down creature. Vengeful Dead was discarded to reveal Putrid Raptor, and Akroma's Blessing was cycled before damage.

After damage, Lonely Sandbar was cycled to keep the Champion alive. At this point, Gurwitz finally played Starstorm for two, which cleared Gary's side of the table and left him with the Clearcutter and Sliver, which regenerated. Gurwitz added to his side with a morph, and ended his turn.

Gary was at a really bad position at this point, but he had at least prepared for it the whole game. He played Frozen Solid on the Clearcutter and an unimpressive 1/1 Daru Stinger. The Sliver and morph attacked to deal three damage to Gary, and Gurwitz summoned Gempalm Polluter. Rush of Knowledge provided Gary with four cards, and he summoned Gustcloak Harrier. Gurwitz's morph turned over to reveal Skinthinner, and that allowed him to force through lethal damage.

Gurwitz- "Chalk one up to the broken rares. Maybe I'll draw one of the other two now."

Gary played Stoic Champion, attacked, and cycled Noble Templar to pump it and get a land. Gurwitz passed turn three without playing a creature, and Gary played a 3/3 Stinger, revealing Daru Lancer and Frontline Strategist. Reaping the Graves on end step brought back a cycled Gempalm Polluter, and Gurwitz summoned Vengeful Dead. 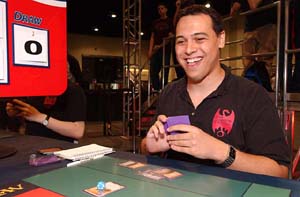 Vengeful Dead fell in combat thanks to a block and a Strategist, and Gurwitz played Call to the Grave. Gary's following attack brought Gurwitz to six, then a second bomb rare hit the table in the form of Visara. Gary buried a morph on his upkeep to the Call (Lancer), and in the most tense moment of the match, Gurwitz started singing the theme to "Pinky and the Brain". Surprisingly, Gary chimed in and both players started laughing. Gary noted that there were 26 minutes left on the clock and wanted to think, so Gurwitz propped his feet up on the chair next to him, looked away from the table, and started chatting with people who walked by.

Gary played a second Champion and attacked, so Visara blocked. Astral Steel pumped the Stinger, allowing it to kill Visara and survive combat. Gurwitz was now fighting an uphill battle, trying to stabilize while Call to the Grave did its job. He played a morph and Vengeful Dead, then ended his turn. The Stinger was the next to die to the Call, and Gary cycled Essence Fracture, then attacked with both his Champions, which Gurwitz chump blocked with both his creatures.

Gary played a Glory Seeker, and Gurwitz summoned Gempalm Avenger. The Seeker died to the Call, and Gary once again sent both Champions into the Red Zone. The Polluter blocked one, and Gary had no cyclers, so one Champion died, while the other brought Gurwitz to four. Gary played Aver Farseer, and sacrificed the Champion on his following upkeep. Dragon Scales followed by Inspirit made it big enough to finish the job, and just in time.

1 Call to the Grave 1 Clutch of Undeath