Round 9: Zev Gurwitz vs. Michael Pustilnik 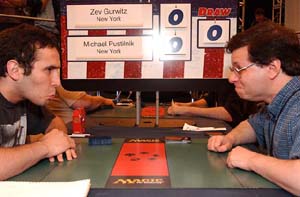 Zev Gurwitz is the accidental creator of Zevatog, the most dominant deck in Standard until recently. He had his first breakout performance at Nationals last year, when he went 5-1 in the draft portion of the tournament. He followed that up with an abysmal 1-5 in Standard, where he played Orbosition in a sea of Yavimaya Barbarians and Juntu Stakes. After winning his first individual Pro Tour Qualifier, he went to Nice and placed in the Top 32. "Mikey P" has won more than his fair share of high profile tournaments. Both players frequently play at Neutral Ground, and have an ongoing rivalry in staring contests. In fact, they decided to have a staring contest to decide who would go first instead of rolling dice or flipping a coin. It lasted about ten seconds, until Pustilnik was the first to laugh.

Gurwitz started off with Benevolent Bodyguard, while Pustilnik summoned Cephalid Scout. Militant Monk built up Gurwitz's side a bit more, while Pustilnik had Nantuko Advocate. Teroh's Faithful helped Gurwitz lock up the ground even further, Acorn Harvest gave Pustilnik some dorks, but Gurwitz brought out Patrol Hound and Skywing Aven. Pustilnik cast Quiet Spectulation, which cased Gurwitz to cringe a bit. It got a pair of Acorn Harvests and Folk Medicine.

Gurwitz- "What? WHAT? Oh God, Mikey P is going off! You evil doctor!"

Pustilnik then played Narcisism, and Gurwitz slumped over in his chair with defeat etched on his face. His Skywing Aven attacked for two, but the squirrel attack of doom from the Pro Tour champion was waiting. Gurwitz leaned forward and stared at Pustilnik, perhaps trying to intimidate him. Repel targeted Militant Monk, and Pustilnik cast Predict, resulting in an amusing sarcastic exchange.

Gurwitz summoned Laquatus's Champion, but Pustilnik didn't seem too impressed. "Come on Mike, don't sound so chipper. I just played the best card in my deck!" The doctor cast Far Wanderings with threshold, and flashed back Acorn Harvest, going down to six life. Gurwitz attacked with his Champion and Aven. Pustilnik flashed back Folk Medicine to gain six life. Gurwitz then tapped a bunch of lands and got a bit confused. As he was trying to straighten out his mana, a watching Collin Jackson came over and asked what was going on.

Gurwitz- "I wanted to cast this spell, and then I had a brain fart and I tapped too much mana for it."

The result was very amusing, as Gurwitz laughed at himself for a bit, and then looked up and flashed a huge grin at Jackson as he tried to figure out his ruling. Gurwitz was allowed to play Vigilant Sentry, and burned for one because he tapped too much mana.

Gurwitz-"Next time I'll try to have a properly functioning brain."

Pustilnik- "That's not good."
Gurwitz- "Heeeeere's Johnny! Oh, wait. There's Johnny. (Points to Jon Finkel at table next to him)" 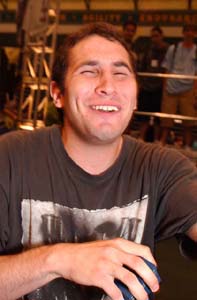 This gave Gurwitz threshold, so Vigilant Sentry pumped up the Aven as well, bringing Pustilnik to four. Mikey P needed to win on his next turn, counter the Champion when it came back out, or lose. Gurwitz untapped and summoned the Champ, and the only card in Pustilnik's hand happened to be Syncopate. It didn't matter, as the rest of Gurwitz's team was able to finish up the job.

Gurwitz- "Are you splashing for Folk Medicine?"
Pustilnik- "(shrug) Yeah."
Gurwitz- "You may be a genius."
Pustilnik- "Yeah, but I'm still losing."

Pustilnik brought out Cephalid Looter. Gurwitz pounded on his deck, played the swamp he had obviously hoped to draw, and killed off the Looter with Toxic Stench. Pustilnik made four squirrels over two turns with Acorn Harvest, Meanwhile, Gurwitz summoned Battlewise Aven and Pulsemage Advocate. Pustilnik brought out Hapless Researcher and Nantuko Advocate. Deep Analysis drew Gurwitz some cards, Repel put the Aven on top of Gurwitz's library, allowing Pustilnik 's creatures to get through for damage. Patrol Hound helped Gurwitz stabilize the board a bit, while Pustilnik went up to six squirrels. Laquatus's Champion then showed up, and a third Acorn Harvest brought the squirrel count up to eight. One chump blocked the Champ, and Battlewise Aven was summoned.

Benevolent Bodyguard gave the Champ pro-green, attacking past Pustilnik's squirrel army while he was at six. Gurwitz made a mistake and played Guided Strike on it when damage was already on the stack, and Pustilnik had a response and played Folk Medicine, gaining ten life to stay alive. He then untapped, and summoned Arrogant Wurm. The Aven got through for damage, and the Champ had another squirrel for a snack. Pustilnik attacked with five squirrels and the Wurm, and cast Keep Watch to draw six cards. 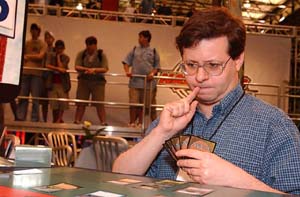 Pustilnik followed up by tapping out to play Churning Eddy on the Champion, but Gurwitz responded by activating Pulsemage Advocate to bring Benevolent Bodyguard back into play. It gave the Champion pro-blue.

Gurwitz- "I'm going to do that next turn Mike. You're at five."
Pustilnik- "But I only have two cards in my graveyard."
Gurwitz- "How many cards are in your hand?"
Pustilnik- "Umm...eleven."

Pustilnik had obviously missed the on-board trick, but there wasn't much he could have done about it anyway.