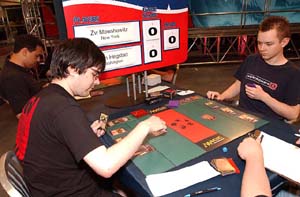 "Thank God for only one Silver Knight at our table," laughed Hegstad.

Zvi explained his laugh with a chuckle of his own as he turned to teammate Justin Gary at the next table, " How shocking that two red drafters at the 'only-two-red-drafters' table are 2-0!" Apparently despite ample evidence and opportunity that at least one other player could and should have joined Zvi and Brian in drafting red, nobody did. "I have NEVER had five seats of coverage in a removal color before!"

They were both playing red-green—Hegstad's deck focused on goblins and Zvi's on beasts. "He's got the insane goblin thing and I have the insane beast thing—we'll see what happens!" Zvi's deck sported two Krosan Warchief's while the 'insane goblin thing' could be either Sparksmith or the fourteen or so goblins that comprised Brian's deck—Zvi did not elaborate.

Brian opened with a Goblin Grappler and a Taskmaster. Zvi threw a Krosan Warchief down to trade with the Grappler, "I might want to provoke that," agreed Hegstad. "Where's an Incinerator when you really need one.

Zvi called his next play of Skirk Outrider a "traitor to the goblin cause" with more laughter than the joke warranted but when it powered up a Torrent of Fire on the next turn that took out a Goblin Clearcutter, he was cut a little slack. Hegstad had nothing to do but deal three with the Taskmaster. 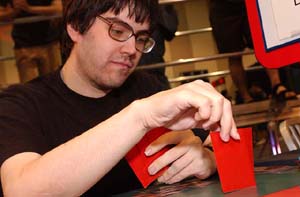 Zvi had some Extra Arms to smack around the 1/1 with and he got in for two with the still small Outrider. Brian played a Chartooth Cougar and attempted to regroup. An amplified Glowering Rogon—showing off another Warchief—let Zvi get in for a total of six with the four-armed goblin.

Brian Torrent of Fired the Rogon and got in for six of his own with the Cougar—Zvi fell to nine. The game was turning into a slugfest as Zvi dropped the ABUer down to a meager four life after playing the Warchief. During his next draw step, Brian could be heard murmuring the words, "Vitality Charm" but 'all' he had was another Cougar to stand back on "D" with his twin.

Zvi reached over with his superfluous limbs and poked Brian down to two while taking out a cat in battle. He tapped out for Ancient Ooze, which was only a 3/3. Zvi chumped with the rare and Hegstad dumped his hand of Sparksmith, Skirk Commando and Goblin Taskmaster onto the table.

Zvi did some deliberate math and decided to just pass the turn. Brian struggled with the same math on his own turn, "I wish I was better at this game..."

"Coming in?" asked a confident Zvi.

"Eventually," and true to his word he sent in the squad leaving Smith and Taskmaster back to watch the gates. Zvi blocked the potentially lethal cat and regenerated. Brian pumped the heck out his commando and dealt six to Zvi—and forced him to regen the Warchief again with his ample mana.

Zvi played a Dragon Fangs and sent the 3/3 trampler into the two 1/1's. He took them both out and dropped Brian to 1 in the process. Timberwatch Elf was handed the inglorious job of chump blocker. 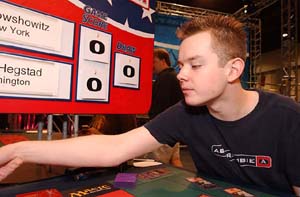 A turn later Zvi peeled a Goblin Sledder and he was able to kill the Cougar in combat. Another turn later they were on to Game 2.

Brian mulliganed but took the next six. He opened with Taskmaster to Zvi's Sledder. Both players made mystery men on the third turn and Zvi joked with Hegstad who was quite unfamiliar with many of the cards coming into the tournament. "I wonder of you remember my morphs..."

"No sirrrr! I was too busy reading the Scourge cards!"

Zvi remembered which morphs Hegstad had however and blocked the morph with a freshly baked Outrider. It was, as Zvi suspected, a Commando. Hegstad was staring in frustration at the Forgotten Ancients in his hand hoping for a Forest in any part of the early game. He took out a few of Zvi's creatures with Doom Cannon naming 'goblins' but he could not deal with Frenetic Raptor and Glowering Rogon.

1 Patron of the Wild 1 Forgotten Ancient